A certain generation of South Carolinians can remember hot summer nights spent at the Pawleys Island Pavilion. Four wooden buildings actually housed the once-popular beach spot over the course of the twentieth century. The first was built during the early 1900s just north of the South Causeway. As the story goes, even during Prohibition, beachgoers could dance and imbibe at the pavilion – provided you had the right connections. 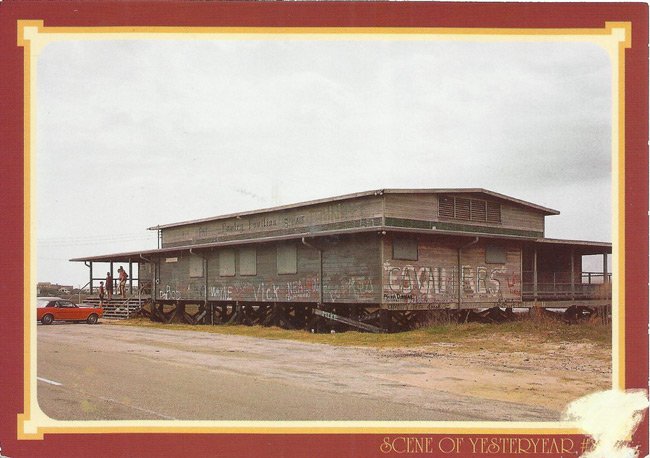 Patrycja, Historic Postcard, © Do Not Use Without Written Consent

By the time the third pavilion – known formally as Lafayette Pavilion – was erected amongst the dunes of Pawleys Island, live music had become a mainstay at the parties held here. Just as famous musicians such as Charlie Parker and Duke Ellington were playing down the road at the Magnolia Beach Club, local bands had people dancing at Lafayette’s until it burned in 1957.

Gene Brigman of Lexington, 2007 © Do Not Use Without Written Consent

The last pavilion to grace Pawleys Island – and the one many are still nostalgic for today – was built in 1960 out into the marsh near the North Causeway. The two images above reflect the building during that era. People remember popular musicians playing the pavilion all night long. Many bands promoted on the radio along the Southeast coast would make a stop at the Pawleys Island Pavilion, where dozens of cars lined the island as young people poured into the dance hall. Musicians such as Maurice Williams and the Zodiacs played here, and dancers would shag to hits by the Drifters, the Embers, and the Rivieras. Sadly, the pavilion was burned on June 16, 1970 by an arsonist – this time not to be replaced. Many suspect that the culprit was a property owner who had had enough of the joviality that permeated an otherwise quiet island. Aside from two inns that sit on the south side of the island, there have been no commercial buildings on Pawleys Island since.

Each May the Town of Pawleys Island hosts a Pavilion Reunion at the Pawleys Island Nature Park at the North Causeway, near the location of the last pavilion. The event includes food, fun, and – of course – dancing!

Do you have a story or an old photo of the Pawleys Island Pavilion that you would like to share with us? If so, please send it to the South Carolina Picture Project. Thank you!

Reflections on the Pawleys Island Pavilion

Artist Gene Brigman, who contributed the above painting, writes, “This painting is Pawleys Island Pavilion as I remember it in the early 1960s. I know that there were more than one of these, all having burned. For a boy of 15 or 16, I remember the really ‘cool’ cars that I wanted so desperately but would never have. Just to go hang-out, shag, and be ever mindful of the opposite sex was quite the summer ritual.”