Prince Frederick Parish – named for Prince Frederick of Wales, son of King George II – was created in 1734 and encompassed the land from the north end of the Santee River all the way down to what is now Georgetown County. The parish was divided from Prince George Winyah Parish, which was established in 1721 and included the Prince Frederick land, extending down to the Sampit – or Sampeet, as it was then called – River. 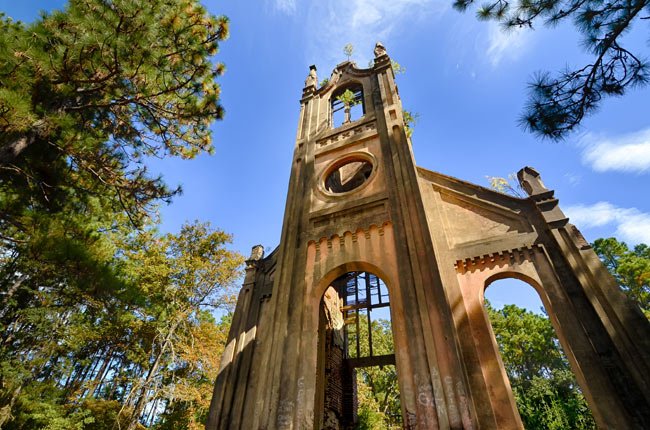 Rightcoaster Photography of Myrtle Beach, 2014 © Do Not Use Without Written Consent

The wooden parish church erected on the Black River for residents of Prince George Parish fell within the new Prince Frederick Parish boundaries once the original parish was divided in two. The Black River Church, as it was commonly called, now belonged to the people of Prince Frederick Parish, and life in this new parish was good for these river settlers. 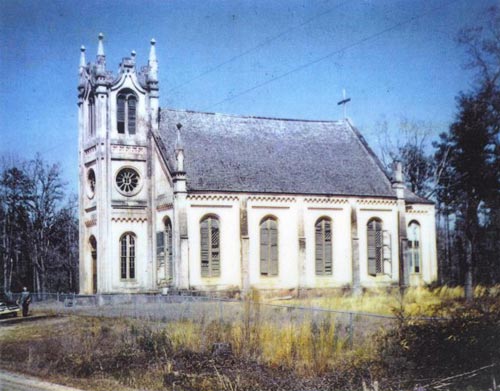 Karen Main of Rock Hill, 1959 © Do Not Use Without Written Consent

Indigo proved to be a lucrative crop for the planters of Prince Frederick Parish for many years until overseas competition and the end of British bounties brought the export to a halt following the Revolutionary War. Rice soon replaced indigo, and planters moved to the lower banks of the Great Pee Dee River where the conditions were ripe for cultivating the flourishing crop. As a result, the Black River Church was abandoned after 1810. 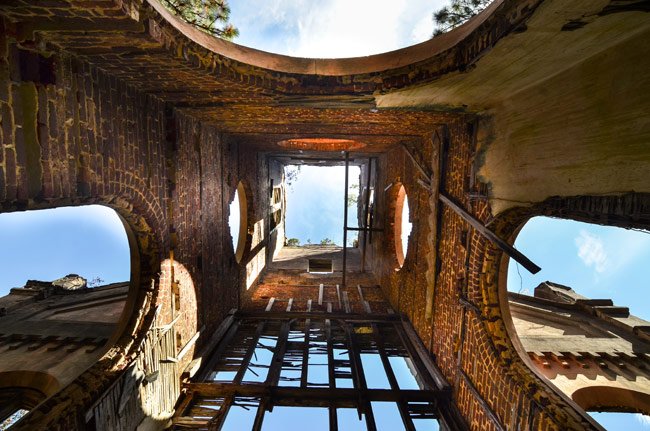 Rightcoaster Photography of Myrtle Beach, 2014 © Do Not Use Without Written Consent

A new church was built along the Pee Dee on land donated by the Reverend Hugh Fraser, former rector of the Black River Church, in 1837. Yet after just twenty years, the new chapel was deemed inadequate. Construction of a brick church (pictured above) to replace the chapel was approved in 1857 and begun in 1859, though it was halted during the Civil War and not completed until 1877. 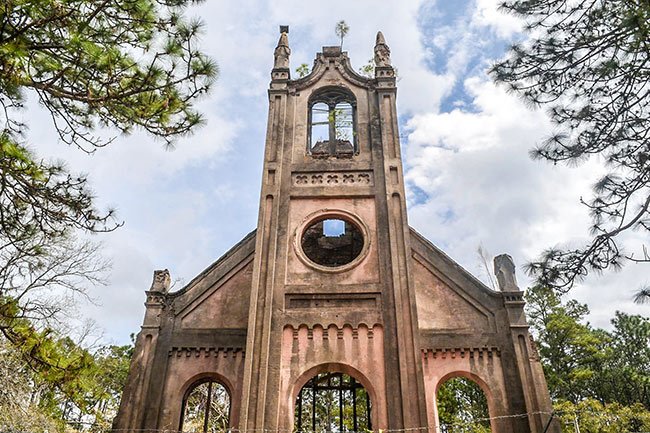 Financially devastated after the war, members of the church were unable to complete the new building until gifts arrived from local donors, including stalls from Hagley Plantation, pews contributed by All Saints Episcopal Church, and a monetary gift of $1,700 from John Earle Allston. The new church colloquially was called the “Gunn Church” for the contractors, Philip and Edward Gunn, one of whom is said to have fallen to his death during its construction. 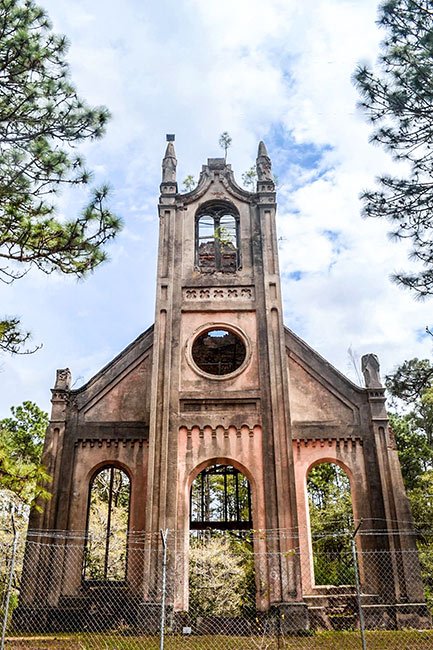 Though the church finally was completed, the rice industry collapsed after the war; an absence of slave labor made the crop unprofitable, and few families were left to support the new church. Former planters moved away from agricultural areas and relocated in cities to recreate their lives, leaving many planting communities desolate. Prince Frederick Church was left unattended and, without regular maintenance, ultimately declared unsafe. Most of the building was dismantled in 1966. Its ruins can be found near Plantersville in Georgetown County.

The Prince Frederick Church is listed in the National Register:

(Prince Frederick’s Episcopal Church) Begun in 1859 and completed in 1876, Prince Frederick’s Chapel played a vital role in the religious life of the Pee Dee settlers in the latter half of the 19th century. With the decline of the rice economy, parishioners migrated to the more densely populated urban areas and the church suffered from lack of maintenance. The ruins of the chapel are all that remain of what once was a striking example of Gothic Revival architecture in South Carolina. Although the buttresses and pinnacles place it in the mainstream of Gothic architecture, the rounded arches, purity of design, and understated decorative elements exhibit a feeling for classical forms. The body of the church, declared unsafe and destroyed in 1966, was originally rectangular in plan and had four narrow arched windows on the side elevations. The only portion which remains today is the west façade with the steeple tower. The tower is divided into three sections. Adjacent to the church grounds is a cemetery which includes numerous examples of 19th century grave markers. 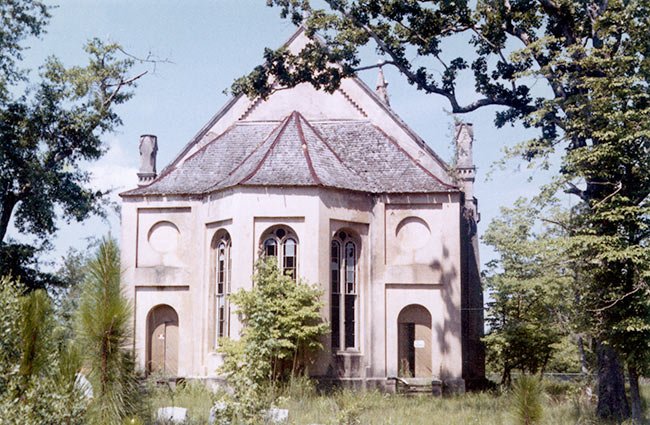 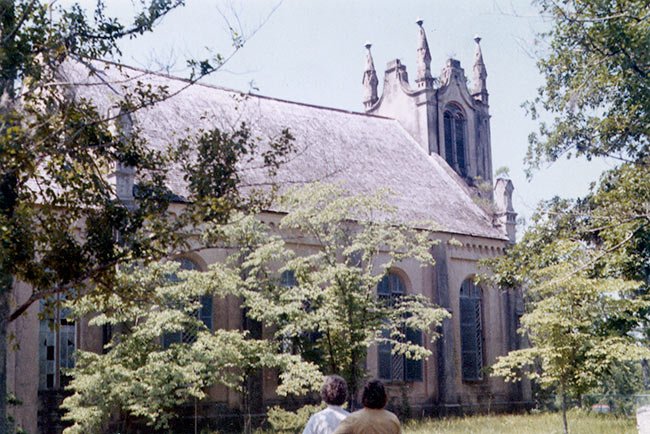 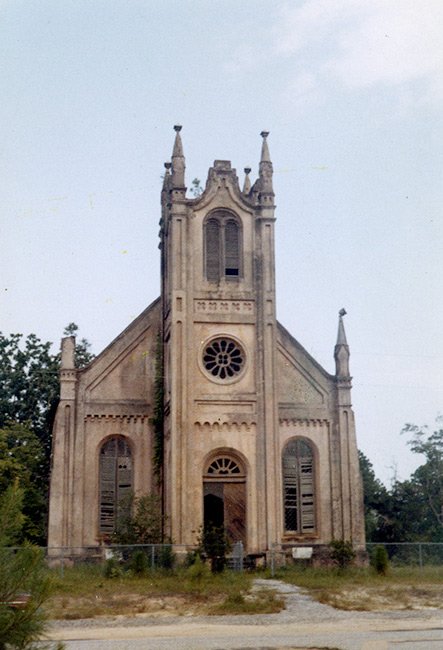