Constructed in 1849, The Hermitage in Murrells Inlet was originally the summer home of rice planter and Methodist minister James Lynch Belin (pronounced Blane). Belin, who had no children, gave the property to his nephew, Allard Belin Flagg II, at least a decade before his own death in 1859. Belin also transferred Wachesaw Plantation to Flagg, who managed its rice fields in addition to practicing medicine. Nearby Belin Memorial United Methodist Church is named for Pastor Belin and was built on another of his properties, Cedar Hill, which he bequeathed to the South Carolina Conference of the United Methodist Church. 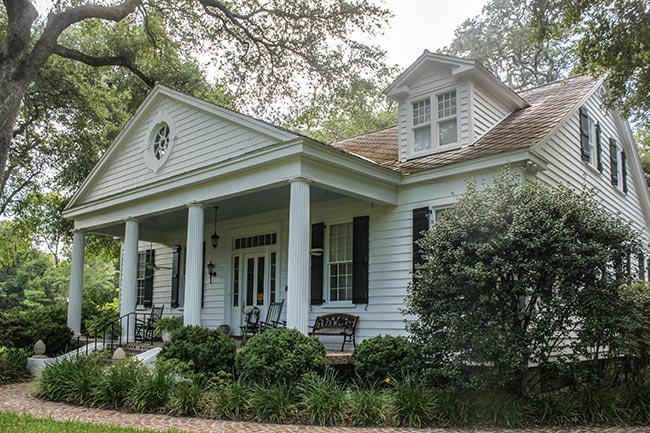 Dr. Flagg’s parents had nine children – seven boys and two girls. Their father, Ebenezer “Eben” Belin Flagg, died young at just 43. Thus at age seven, the youngest Flagg child and the only Flagg daughter to survive infancy, Alice Belin Flagg, was sent to a boarding school in Charleston. Alice is the subject of fervent lore, and it is said that her ghost haunts The Hermitage today, where she is sometimes called “The Lady in White.” However, Alice lived most of her short life in Charleston and could never have resided at The Hermitage since it was not completed until after her death in January, 1849. 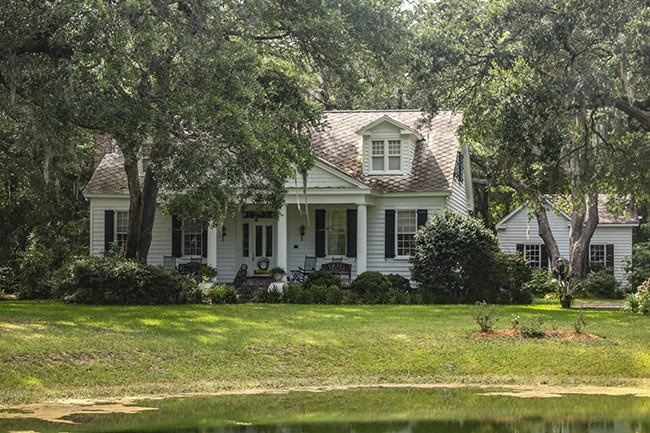 Interestingly Dr. Flagg was proceeded by another Allard Belin Flagg, an older brother who died in 1822 at the age of two. Dr. Flagg was born the following year, in 1823, and his uncle, the Reverend Belin, encouraged his sister and brother-in-law to name their new son after his brother as a way to honor his memory. (Note that some sources – most notably his own gravestone – give his birth date as April 14, 1820 instead of June, 10, 1823. This is inaccurate. April 14, 1820 was the birth date of the first Allard Belin Flagg, who died as a toddler.)

The Hermitage passed out of the Flagg family following Dr. Flagg’s death in 1901 and has changed hands several times since. Today the antebellum planter’s retreat remains a private residence, albeit in a new location. The house was moved in –, when a developer bought the plantation and established a gated community there. 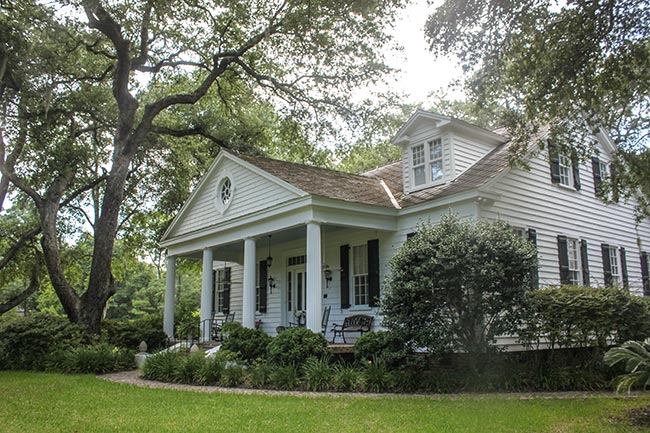 The Legend of Alice

The story of Alice Flagg can be described as an historical legend, or a folktale laced with historical facts. Alice Belin Flagg was the sister of Dr. Allard Belin Flagg, who acted as a father figure following the death of their father, Ebenezer, in 1838. According to the legend, when Alice was a young woman of fifteen or sixteen, she fell in love with a man whom her brother considered beneath the family’s social status. The story goes on to say that in an effort to keep the two apart, Alice was sent away to boarding school in Charleston. However at the time it was common for young women to receive educations away from home, so separation may or may not not have been the impetus for this departure. 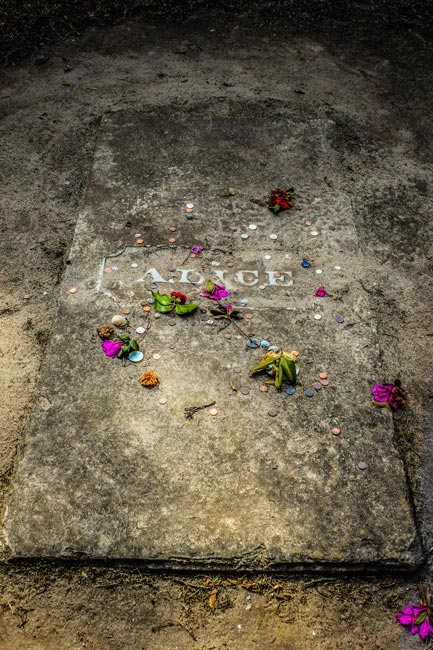 While at school, Alice began to exhibit symptoms of a disease known as “country fever.” The disease most likely was malaria, a common affliction for people exposed to the relentless mosquitoes found on boggy rice plantations. As her brother was a doctor, he came to Charleston to bring her back to the Hermitage and provide her with medical care. The story claims that Alice slipped into a comatose state at some point either during the ride back to Murrells Inlet or shortly thereafter. While caring for his gravely ill sister, Dr. Flagg noticed a ring tied around her neck, apparently from her forbidden beau. He removed the ring from her neck and tossed in into the creek. When Alice awoke, she clutched at her neck only to discover that her cherished ring was gone. Sadly, Alice soon succumbed to the disease and died at the Hermitage. The story claims that her spirit haunts the home and its grounds, looking for the ring. 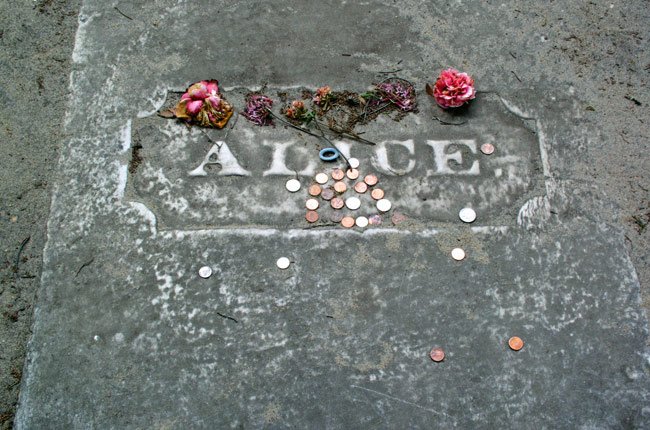 Variations of the story also place the spirit of Alice at All Saint’s Episcopal Church, where many of her family members are interred. A marker bearing the single name “Alice” and nothing more attracts people who say that circling the marker backwards thirteen times and then lying on top of it will surely invite a visit from Alice’s ghost. Others drop coins and rings upon the marker, as seen in the photos above.

However, records from All Saint’s indicate that no one is buried in that spot and that the marker is strictly commemorative. Many believe the marker honors another Flagg family member who shared Alice’s first name and who was swept out to sea in a devastating hurricane of 1893. Alice Flagg of the legend is actually interred at Belin Memorial United Methodist Church – then called Cedar Hill – along with her uncle and the church’s namesake, the Reverend James Belin, according to church records. Her burial spot is unmarked.

Alice’s ghost story can be traced to the 1940s. According to the book Shared Traditions: Southern History and Folk Culture by Charles W. Joyner, writer and folklorist Genevieve Willcox Chandler, who lived in the Hermitage as a child, published accounts of stories and legends from the Waccamaw Neck in the 1941 Federal Writers Project State Guide Series. The story of Alice is not mentioned in the volume. Chandler herself claims that the ghost tale was made up by her brother, Allston Moore Willcox, to frighten their out-of-town cousins upon their visits to the Hermitage. The story first appears in print in 1946 when Julian Stevenson Bolick, who learned it from the Willcox family, mentions it in his book, Waccamaw Plantations. From that point the story has grown and adapted through the years.

The Hermitage is listed in the National Register as part of the Murrells Inlet Historic District:

The Murrells Inlet Historic District contains a significant concentration of buildings which visually reflect the transition of the area from adjoining estates of two nineteenth-century rice planters into a twentieth century resort community. In the mid-nineteenth century, homes were built for two prominent Georgetown County rice planters, Jacob Motte Alston and Dr. Allard Belin Flagg. After the lands began to be subdivided in the early twentieth century, a small community of summer houses developed. Today the historic district contains two antebellum houses, which are local interpretations of the Greek Revival style, as well as a collection of early twentieth century vernacular resort buildings.

Residential in character, the historic district contains approximately nineteen houses. Although they exhibit some diversity, the prevalent use of wood as a building material, the large screened porches, and the setting of moss draped trees, marshland, and piers provide a visual unity. Since most of the buildings overlook the creek and marshland to the east, and since the creek and marshland provide the essential setting, a substantial amount of this area has been included in the potential historic district. Besides being crucial visually to the area, the marshland has played an integral part in the historical development of Murrells Inlet.

Plan Your Trip: The Hermitage