Jones Gap State Park is located about 30 miles north of Greenville – just a stone’s throw from Symmes Chapel (Pretty Place) and Caesar’s Head State Park. It is one of South Carolina’s finest spots to enjoy picnics, hiking, camping, and fishing. The park also features an environmental learning center with exhibits and a lab where students can study nature. 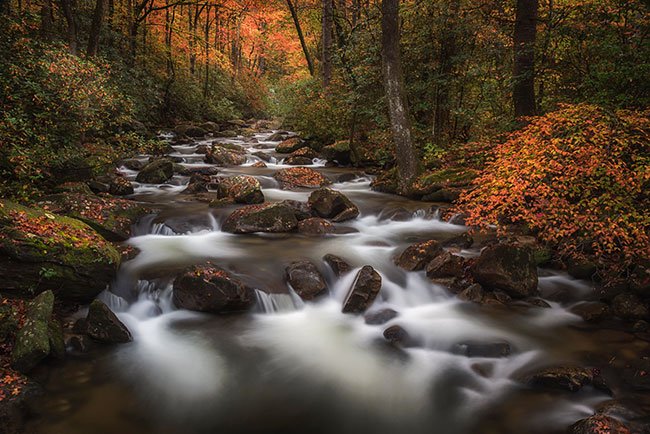 Jones Gap State Park is part of the Mountain Bridge Wilderness Area, which consists of 11,000 acres of natural woodlands and mountains along the Blue Ridge Escarpment (PDF). The Jones Gap Trail is 5.3 miles long and follows the old Solomon Jones toll road, operated between 1840 and 1910. You will find campsites off this trail which are set along the water and have fire pits. 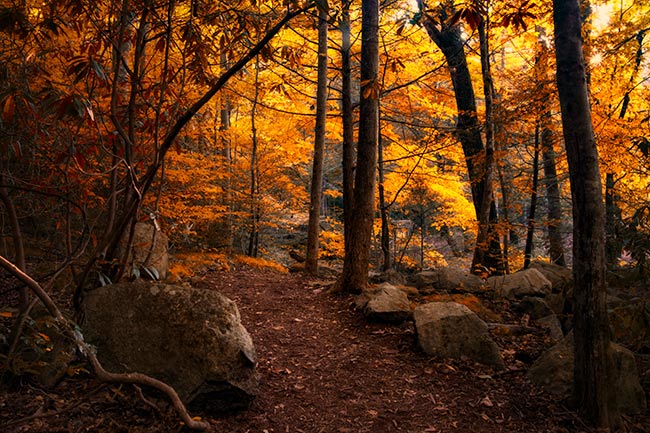 Bonnie Cameron of Mauldin, 2018 © Do Not Use Without Written Consent

Jones Gap State Park is home to the Middle Saluda River, which winds its way through the park. The Middle Saluda was the first river protected under the South Carolina Scenic Rivers Program. 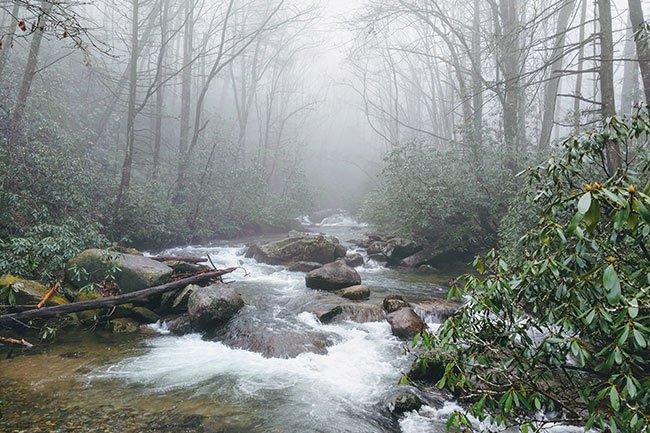 Mike S. Bowers of Awendaw, 2018 © Do Not Use Without Written Consent

Dropping almost 1,000 feet in four miles, the river has many cascading falls and is especially popular with fishermen because its cold, clear water supports a large trout population. 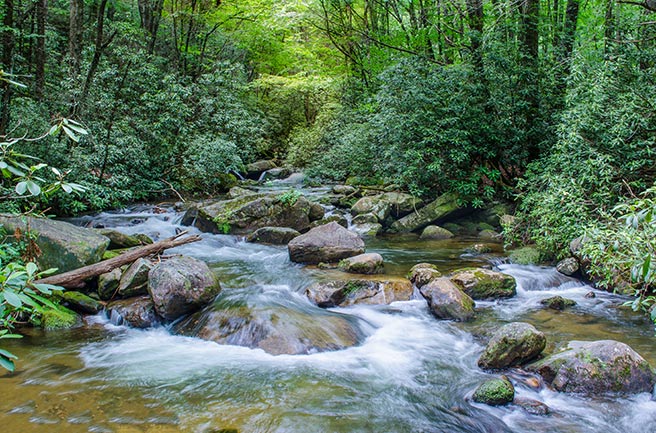 Jones Gap State Park features a variety of trails, and one of the best leads to Jones Gap Falls – a 50-foot cascade over a staircase of stones. The trail follows the Middle Saluda River, making for a beautiful hike along the way. Like most waterfalls in South Carolina, the falls are at their best right after a good rainstorm. 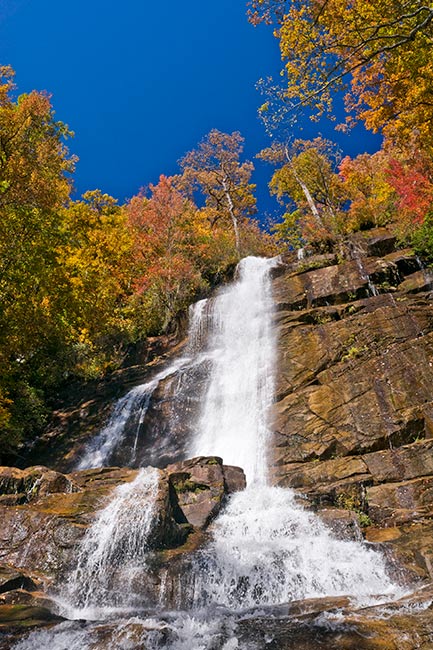 Another trail leads to Rainbow Falls, shown below. The waterfall is 100 feet high and spills over a beautiful granite wall. 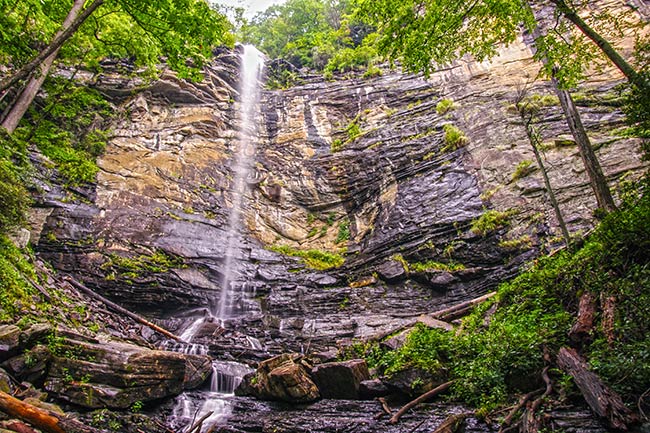 Alan Taylor of Spartanburg, 2015 © Do Not Use Without Written Consent

Although Rainbow Falls lies within Jones Gap State Park, it is owned by Camp Greenville, and you need to ask permission to visit before you go if you enter the area through the camp access. However, access to the falls through the park is permitted and simply requires a park fee. 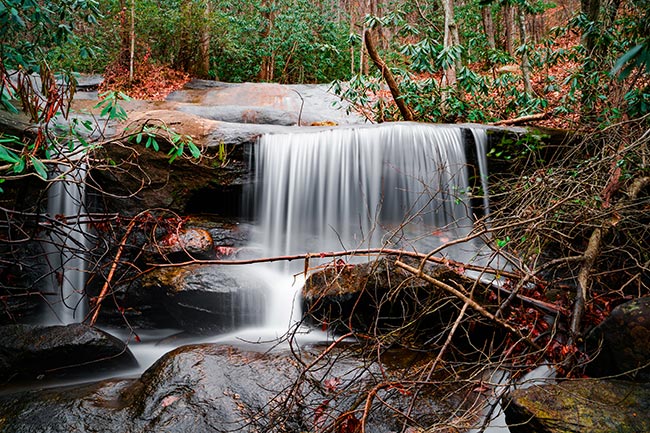 Richard Upchurch of Simpsonville, 2018 © Do Not Use Without Written Consent

The image below shows the beautiful Falls Creek Falls – not to be confused with Fall Creek Falls in Oconee County – a 100-foot waterfall which cascades over two major levels. Reaching the falls is a moderate, 1.9-mile hike up an old logging road. The majority of the hike is uphill mixed with a few flat stretches. A great picnic area exists above the falls which is accessible by trail beyond the waterfall basin. The trail is open year round. 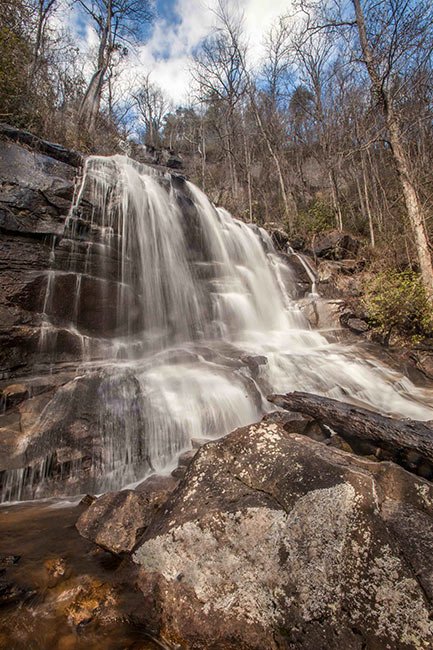 Danny Ramey of Duncan, 2018 © Do Not Use Without Written Consent

UPDATE: An alert reader informed us that the water surrounding this slide has dried up, allowing grass to grow around the structure. But what fun it must have been in its day!

No guide to Jones Gap would be complete without a shot of this awesome sliding board, found on the right side of Jones Gap Road at the junction of Devils Fork Road about four miles before you hit the entrance to the park. The slide is owned by a local family and sure looks like fun to us! As photographer Jeff Hammond says, this slide is the “perfect way to ring in summertime!” (If you know anything about the slide, be sure to let us know so we can add it.) 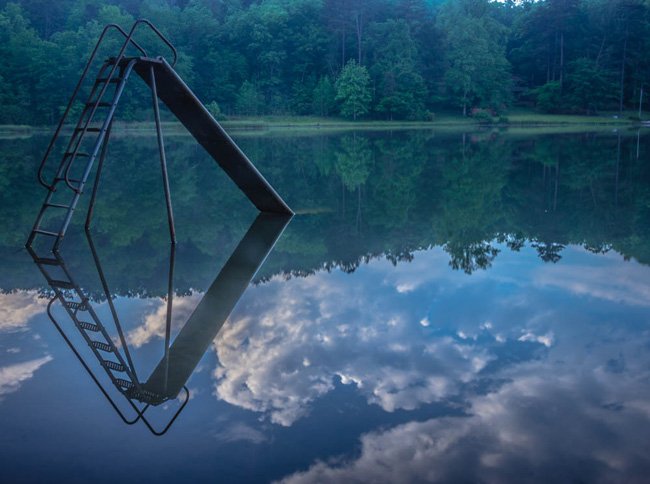 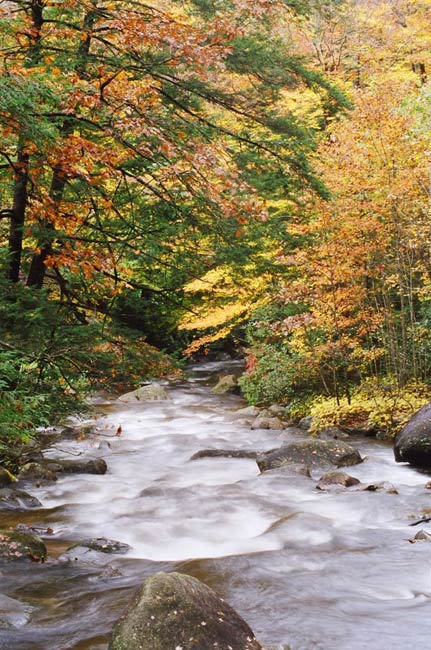 Eve Brewer of Easley, 2006 © Do Not Use Without Written Consent 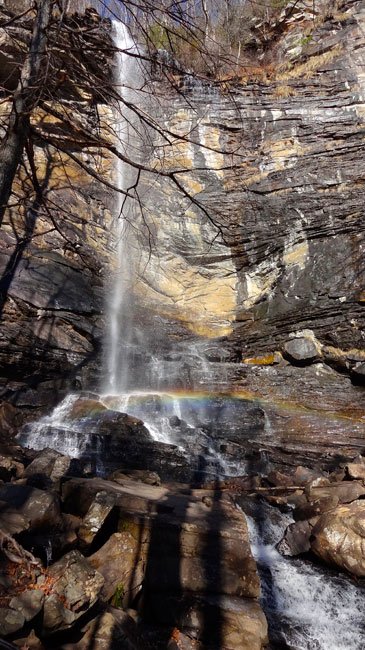 Dyana Walters of Marietta, 2014 © Do Not Use Without Written Consent

Photographer Jeff Hammond contributed the photo of the Middle Saluda shown below and describes the scene this way: “This picture was taken in May at Jones Gap State Park. It was around 7:15 on a Wednesday evening. We had received a lot of rain over the past few days and the creek was dumping out fresh mountain water for me to photograph. This is only about 100 yards from the trail head at Jones Gap.” 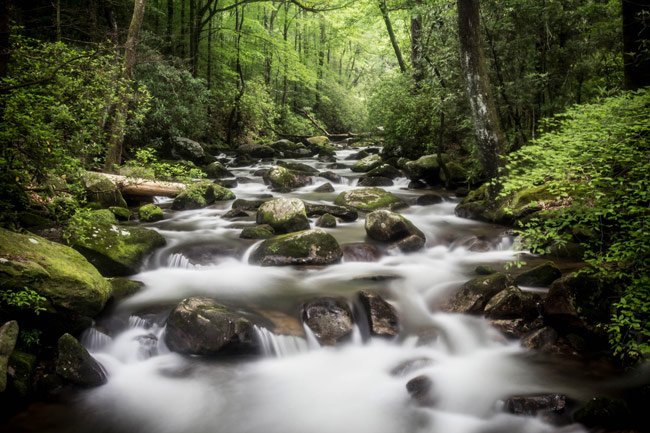 The image below was taken by Deborah Davis of Oconee County, an avid hiker who describes the trail where she captured her shot: “It follows the river almost the entire way and you take a short detour up to the falls. The hike is beautiful and rich in wildflowers and small streams joining the river. We took our dogs and a lunch which we ate on a boulder at the river’s edge. The area is clean and pristine and most enjoyable for adults and children alike.” 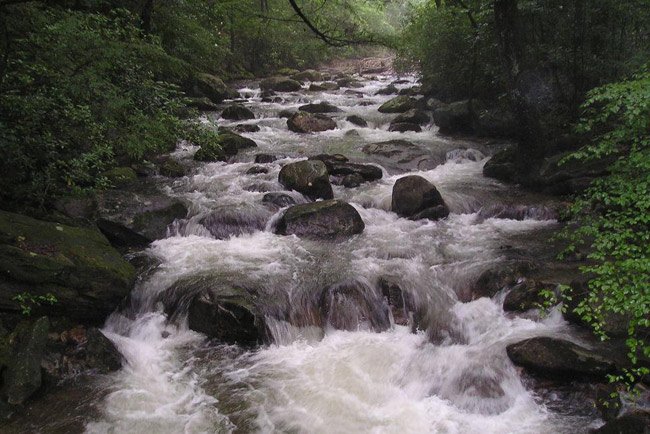 Deborah Davis of Oconee County © Do Not Use Without Written Consent

The picture below was submitted by Shane Norris of Lexington, who writes, “I was backpacking along the Jones Gap Trail and decided to stop and see Jones Gap Falls. It had not rained much so it was not as powerful as usual but it was still a beautiful sight. Due to the late cold weather, the autumn leaves were all changing colors at once, and the sun was coming down through them in a beautiful manner. After climbing to the top of the falls I descended and snapped some quick shots before we moved on. It truly was a beautiful display of the natural beauty of South Carolina.” 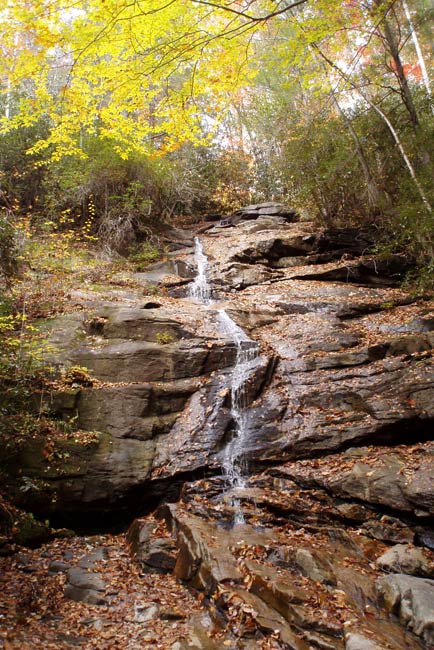 Shane Norris of Lexington, 2007 © Do Not Use Without Written Consent