Columbia‘s Allen University, a noted college founded in the African Methodist Episcopal – or A.M.E. – tradition, began right here, on this rural Upstate property located in what is today the Greenwood County Town of Hodges. 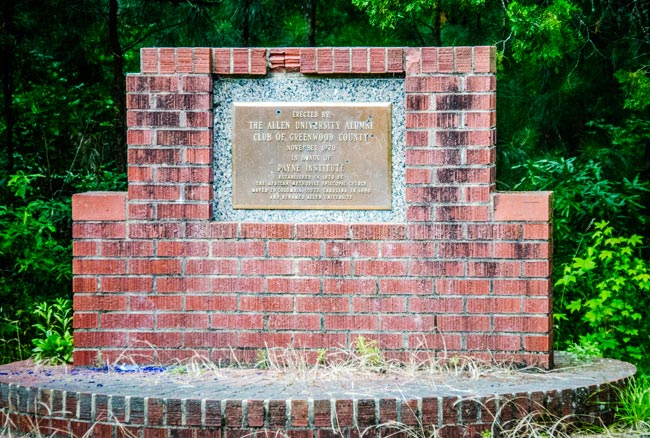 When the Civil War ended, many African-Americans in the South left the churches they had attended with their white owners and established new churches. From this point the African Methodist Episcopal denomination grew exponentially in South Carolina. The Columbia District of the A.M.E. church wanted a means to educate newly-freed African-Americans and train them for leadership within the church. In 1870 the Right Reverend John Mifflin Brown and other clergy from Columbia raised funds to purchase 150 acres in Cokesbury – part of which has now merged with Hodges and abuts the historic village of Cokesbury – to build their school.

With support from a committee led by the Reverend Simon Miller from what was then Abbeville District (which now includes Abbeville, Greenwood, and McCormick counties), the school was developed and called the Payne Institute in honor of Bishop Daniel Alexander Payne, a South Carolina native and proponent of education. Despite objections from white South Carolinians who discouraged educating blacks and doubts from both black and whites from the North – where the A.M.E. denomination was founded in 1816 – that the school could work, the Payne Institute opened and was a success. In fact, within ten years a larger school was necessary, and the Payne Institute was moved to the state capital in 1880 and renamed Allen University for the Right Reverend Richard Allen, who founded the A.M.E. denomination in Philadelphia.

The school initially taught students ranging from elementary school through professional studies. By 1929 only college students were admitted. Allen University maintains a legacy of education that has produced leaders in the A.M.E. church and in the professional and academic worlds.

The memorial marker shown here commemorates the founding of this historic institution:

Erected by the Allen University Alumni
Club of Greenwood County
November 1970
In Honor of Payne Institute
Established in 1870 by
The African Methodist Episcopal Church
Moved to Columbia, South Carolina in 1880
And Renamed Allen University