Riegel Stadium in the textile town of Ware Shoals tells the story of American sports in the rural, segregated South. The stadium was built in 1931 as part of the local white high school and was originally used as a football field. Later a baseball field was added, and during the heyday of Textile League baseball in the 1930s, it was said to have an outfield so big that “virtually no one could hit the ball over the center field fence.” 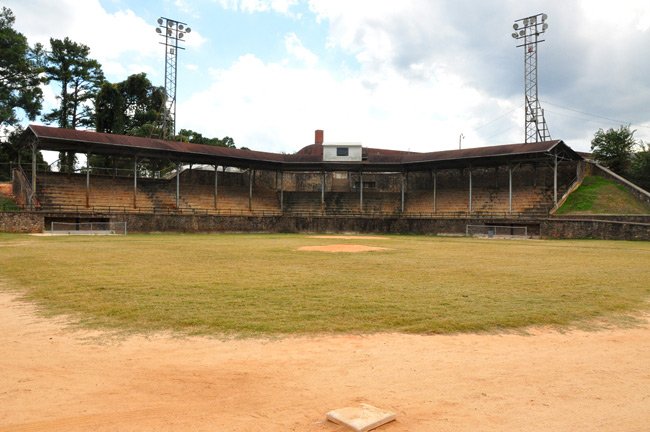 The Textile League began as recreation for mill workers. The league became more competitive and elite when a player from Brandon Mill in Greenville by the name of Joe Jackson attracted the attention of Northern baseball scouts. Shoeless Joe’s success led to contracts for other Textile League players, and Ware Shoals native Johnny Wertz entered the pros in 1926.

Because professional baseball was segregated, several Negro League baseball teams formed. Riegel Stadium hosted many such teams over the years, along with players from the women’s textile leagues. Textile League baseball waned with the advent of World War II, and advertisements on center field fences became necessary for teams to stay afloat. The revenue from the advertising allowed the league to survive and it later produced professional player and Reigel Stadium alumnus Lou Brissie.

Today Riegel Stadium is associated with Ware Shoals High School. Built in 1926, it is one of South Carolina’s oldest schools still in use and features a multi-field complex used for baseball, football, and soccer. The storied history of Riegel Stadium made it an ideal place for the filming of Leatherheads.

Blake Lewis, a Greenwood-based photographer who took the photo above, shares this story: “The school that the baseball stadium is associated with was built in 1926, making it one of the oldest known schools in South Carolina. This stadium and the football stadium that is connected to its outfield were featured in the movie Leatherheads. The two fields are known as Riegel Stadium and were completed in 1931.”

Susan Stone tells us: “My parents met at a dance in the field house at Riegel Stadium in the 1940s. In the ’40s the town of Ware Shoals was always ‘hopping’ on Fridays and Saturdays.”