Legends surrounding the silent and solitary Rock House run as thick as the woods that hide it. Located deep in the shadows of Rock House Road in rural Greenwood County, the fireproof building was constructed entirely from stone, concrete, glass, and steel. The now-crumbling fortress is accessible only by foot, and no one has ever lived inside its walls. 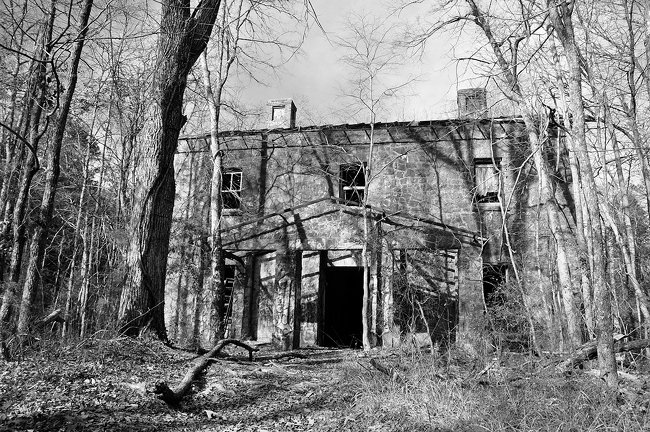 Although it stands on private property, its mystery and ominous edifice seem to invite intruders. Vandalism and theft have ravaged the home. Its walls are covered in graffiti, and its once graceful interior has been torn apart. The circular iron staircase was stolen years ago, and visitors are now greeted by a gaping hole in the ceiling. Daredevils unwilling to be thwarted reach the second and third floors by climbing the walls. Shredded paneling and shards of tile lie in dust on the floor.

Local lore claims that its builder lost his family in a fire, or that the owner’s wife died inside the home so he could not bear to stay. The real story of Rock House, however, is far more interesting as either of these tales.

Above its door, you will see a carving that reads, “Tolbert 1922.” Indeed, construction began in 1922 (not in the early 1800s as many say) and its builder was a man named Thomas “Tom” Payne Tolbert. The great-grandson of immigrants from County Antrim in Ireland, Tom’s father, John Robert Tolbert, fought in the Civil War and was decorated as a captain for his service. In spite of this, the Tolbert family had long disavowed slavery. According to Tom’s great-great nephew, John Robert Young, when the Tolbert sons, including Tom’s father, were sent to fight for the Confederacy in the Civil War, patriarch John Tolbert told them that “it was their duty to go to war for their country … but they would lose because the cause for which they would be fighting was wrong.”

In fact, John Robert supported the enfranchisement of blacks after Emancipation, and in fact ran for State Superintendent of Eduction on the fated Daniel Chamberlain ticket during Reconstruction – widely considered the most corrupt election in South Carolina’s history. (In an effort to preserve peace, Chamberlain later ceded his governorship to Wade Hampton, III.)

All four sons served for the entirety of the effort, and mercifully, all four Tolbert sons returned home. Though slaves had been emancipated, the Tolberts were still indignant over the injustices experienced by their black neighbors, particularly the 1895 state law prohibiting blacks from voting. In 1898 John Tolbert and his son, Thomas, encouraged blacks to cast mock ballots in a congressional election. A riot ensued, and Thomas was badly injured. The Tolberts suffered harassment in the years to come and feared even worse.

In 1904 the Tolbert home burned. Though everyone escaped, this event and other subsequent house fires shaped Thomas Tolbert, who used his family land to build a fireproof home in 1926 – Rock House. A simple man who never married, Tolbert lived in the detached kitchen and used the large house to store family heirlooms. While it may sound as though Tolbert lived his later years in isolation, his obituary describes him as follows:

“To his old friends he revealed a character intensely individualistic and yet quite sympathetic with the welfare and interest of those he knew well.”

The Rock House features eight symmetrical rooms on two floors with two fireplaces between them. It once had a spiral staircase in the center, which is now long gone. It is frequently the subject of vandalism, despite being privately owned by Tolbert descendants. –>