This small, rural boat landing is located on Peachtree Road near its juncture with Mill Pond Road, roughly three miles northwest of the Socastee Swing Bridge. It is paved and offers ample parking. Set on an undeveloped bend in the Waccamaw River, it serves as a popular kayak launch along the Waccamaw Blue Trail. As you can see from the photo below, it is also a popular spot for fishing. 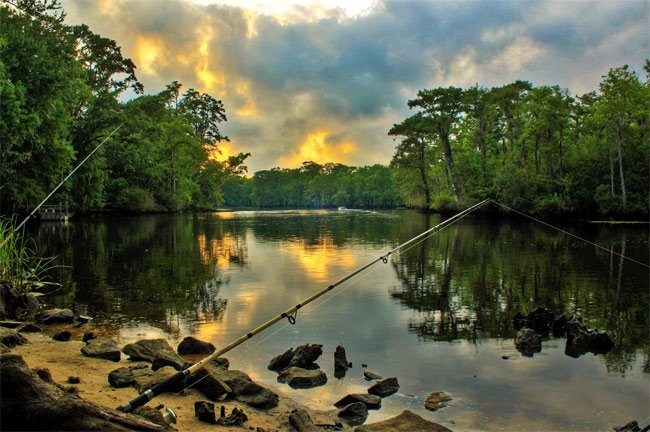 Chuck Lawhon of Myrtle Beach, 2014 © Do Not Use Without Written Consent

Socastee is noted for its connection to the Reconstruction era following the Civil War. Developed at that time, the community has remained largely in tact ever since. A mercantile called T.B. Cooper Store was established near Peachtree Landing, making the latter an ideal location for a ferry. The store offered necessary supplies and also served as a gathering place for news and gossip; it even featured a small post office tucked behind a wire cage. Prior to the creation of the Socastee Swing Bridge in 1935, the ferry at Peachtree Landing made transportation from Socastee to Conway possible. The wooden vessel also carried beach-goers to nearby Murrells Inlet and Pawleys Island.

The T.B. Cooper Store operated from 1905 through 1930 and still stands today. The area’s first public school sat across a field, and a cotton gin and grist mill rounded out the area’s offerings. One of Socastee’s other extant landmarks, the Sarvis House, attained most of its materials via the ferry at Peachtree Landing.

The ferry’s most important contribution, however, was the conveyance of turpentine and other naval wares. Socastee’s post-war economy was based on this traffic, and the Peachtree Ferry was instrumental in the community’s ability to withstand the changes that followed the end of slavery. In light of that, it is interesting that the landing most likely derives its name from the former Peachtree Plantation.

The landing is currently owned both publicly and privately; the U.S. Fish and Wildlife Service owns the inland portion while a private citizen owns the waterfront. Today Peachtree Landing is also the site of a memorial garden dedicated to Heather Elvis, a young woman who disappeared here in December, 2013. Our thoughts and prayers go out to her family.

This was taken on a very muggy evening, in July, with very little wind which ended up being perfect for reflections on the water. When I arrived, I noticed someone fishing and initially thought my options of getting a good shot were very limited due to the small size of Peachtree Landing. After about 30 minutes of chatting with the fisherman and snapping a few shots here and there, I took this shot. It’s funny how sometimes, when you first arrive at a location, you think it’s not going to be a great day behind the camera and within an hour you are thrilled that you stayed.

A relaxing evening of fishing at Peachtree Landing in Socastee, S.C. We are truly blessed to live in such a beautiful state with so many beautiful places and things to fill the lens. Wish I would have started shooting many many years ago.