The historic Pine Lakes International Country Club in Myrtle Beach was developed as Ocean Forest Country Club in 1926. The golf resort was the enterprise of Greenville textile tycoon and venture capitalist John T. Woodside, founder of Woodside Mill as well as several businesses around the state, including hotels, banks, and other mills. He and two of his brothers purchased 65,000 acres of what was then rural property around Myrtle Beach, including prime ocean front land, and immediately began establishing a golf course. By 1927 a hotel and 27-hole golf course designed by Robert White, the first president of the Professional Golfers Association, had altered the landscape of the burgeoning beach town, paving the way for Myrtle Beach to become one of the nation’s most popular vacation destinations. 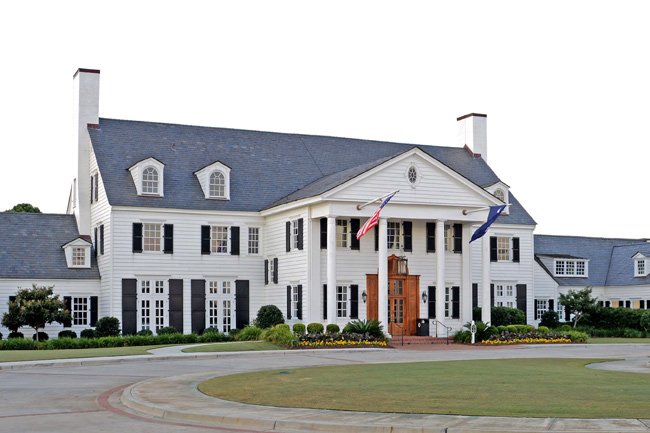 The clubhouse, seen above, served as the hotel until the Ocean Forest Hotel (below) was completed in 1930. Unfortunately, soon after the hotel was completed, the the Woodsides lost their Myrtle Beach real estate holdings along with most of their other businesses – including the Woodside Mill – as a result of the stock market crash. Frederick Albert Warner Miles later purchased the beach property, and in 1944 he began plans to restructure the resort. According to the National Register, in 1946 he sold 18 of the 27 golf holes to developer John McLeod and hired Robert Smith to redesign the remaining nine holes and add an additional nine. During this time Miles changed the name of the club from Ocean Forest to Pine Lakes.

Contributor Bill Chapman, whose parents purchased a lot from Mr. Robert White in 1948, offers a differing account, he says: “Robert White, a Scotsman and first president of the PGA was the designer of Pine Lakes. He lived on Woodside Avenue across from the golf course. My parents bought a lot from Mr. White in 1948 and built a house on Poinsett Road. Poinsett ran from the Hotel on the oceanfront to the golf course. Robert White had died when another nine holes was added in the early 1960s.” He continued with “I know about what happened to 18 of the 27 original holes. Nine were sold off and nine just went back to nature, and in the 1960s were developed. A new nine was added in the early 60s. I was the first starter there in 1963 when I was 12 years old. $22 a week and lunch!” 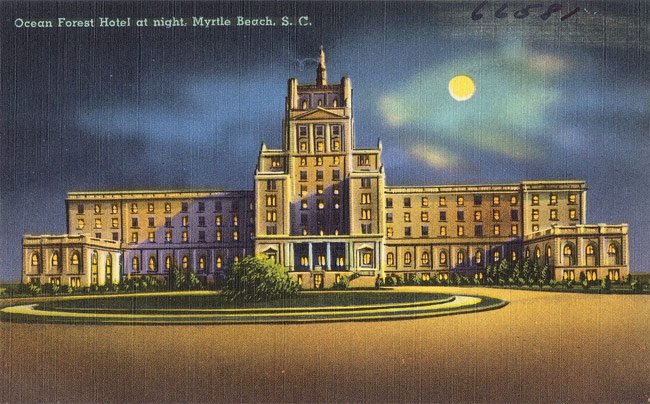 Under Miles’ vision, Pine Lakes grew into a premier golf resort, attracting business luminaries from around the world. In 1954 executives from Time-Life founded Sports Illustrated magazine while on a business trip to Pine Lakes. The resort became private in the 1970s, and the Ocean Forest Hotel was demolished in 1974. While features of the resort remain in historical condition, such as the back nine and the clubhouse facade, Pine Lakes International Country Club – affectionately called “The Grandaddy” – is a modern-yet-traditional club with a renovated front nine, a restored clubhouse and pool, and fine dining. 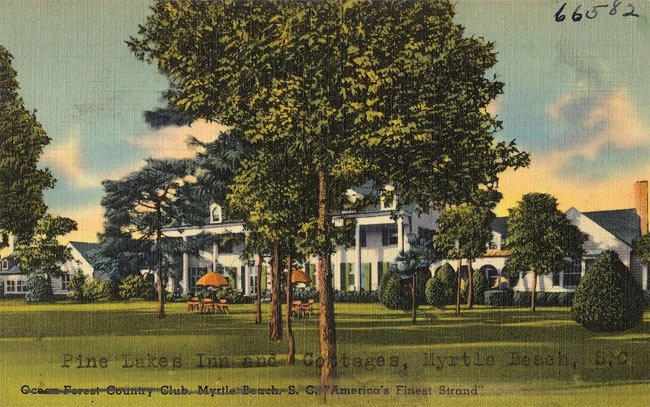 (Pine Lakes Country Club) The Ocean Forest Country Club is significant for its association with Myrtle Beach’s growth and prosperity as a coastal community resort/vacation destination, as an unusual example of Classical Revival architecture, and in the area of landscape architecture for the present 18-hole golf course dating to 1946. The country club is historically associated with an important period in Myrtle Beach history – the tenure of John T. Woodside and the Woodside brothers. In 1926 the Woodsides purchased 65,000 acres of beach front and other prime real estate from Myrtle Beach Farms Company. Although Woodside would lose his holdings in Myrtle Beach following the stock market crash of 1929, his vision for Myrtle Beach and accomplishments during his tenure had a great deal to do with its subsequent growth and prosperity. One of his greatest accomplishments was the development of the Ocean Forest Hotel and Country Club. The club and hotel were designed by an influential New York architect, Raymond Hood. Construction of the club began in 1926 and was completed in 1927. When the club was built, a 27-hole golf course was built in association with the club; it was designed by Robert White, a golf course designer and future president of the Professional Golfers Association of America. Although the original 27-hole course is no longer intact, the present course dates back to 1946, when the new owner, Fred Miles, sold 18 of the 27 holes to John McLeod for real estate development, retaining only nine. Mr. Miles then hired Robert White, a native of St. Andrews, Scotland, to redesign the nine that were left and add nine more.