This swing bridge, located in the historic community of Socastee, pivots by demand at quarter-to and quarter-past the hour. Built in 1935, it crosses the Intracoastal Waterway and helps connect the county seat of Conway with nearby Myrtle Beach. 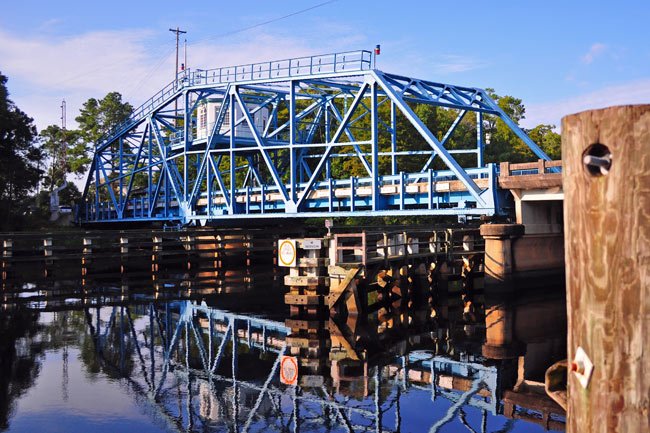 Completed in 1936, Horry County’s section of the Intracoastal Waterway holds special importance. After more than a century, it formed the final leg in this 2,700-mile route, which runs along the Eastern Seaboard from Maine to Florida and provides safe, non-oceanic navigation for boats and ships. 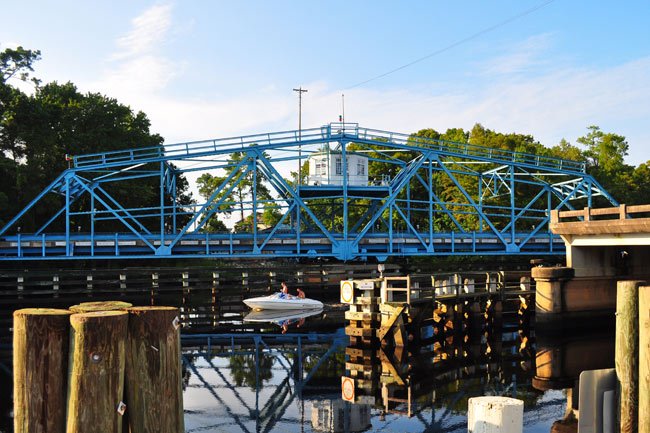 The Intracoastal Waterway got its official start with the General Survey Act of 1824, though George Washington himself is said to have dreamed of such a route. Interestingly, the leg that runs from Little River to Socastee Creek also holds the distinction of being the “longest man-made ditch in the entire length of the Intracoastal Waterway” (Horry County Historical Society). 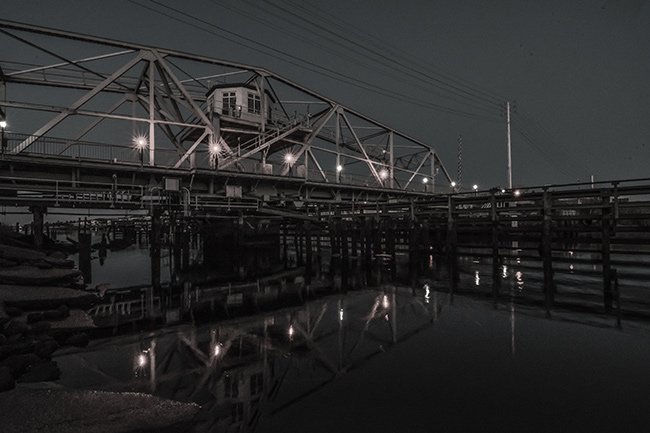 John Flecknoe of Nichols, 2018 © Do Not Use Without Written Consent

The Socastee Swing Bridge is listed in the National Register as part of the Socastee Historic District:

The Socastee Historic District, comprised of a metal swing bridge that crosses the Intracoastal Waterway, two houses, one store, and a pecan grove, represents the early twentieth century creation of the community of Socastee. It has local significance as an intact example of the development of communities in the upper coastal region surrounding the newly emergent small commercial enterprises in the decades following the Civil War. The community came into being in the 1870s and 1880s; its current form shows to what it had evolved by 1935. This is one of the few intact examples of such communities, with a store and surrounding houses, in Lowcountry South Carolina that has not had significant intrusions or alterations. The district contains particularly good examples of three types of vernacular architecture which were prevalent in the late nineteenth and early twentieth centuries in South Carolina: a modified weatherboard-clad I-House built in 1908, a massed-plan side gabled weatherboard-clad house built in 1881, and a front gable frame commercial building built in 1905. The bridge is a swing-span, Warren through-truss type bridge with rigid joints which when completed in 1935 marked the completion of the Intracoastal Waterway in South Carolina.

[The] Socastee Intracoastal Waterway Bridge (1936) [at] SC State Road 544 at the Intracoastal Waterway [is a] swing-span, Warren through-truss type bridge with rigid joints. It measures 217 feet in length, and approximately 24 feet wide. Sources differ on the contractor responsible for building the bridge. According to
a pamphlet printed for the opening of the Waterway in Socastee in 1936, the Socastee Bridge was built by the Tidewater Construction Corporation. According to a 1981 South Carolina Highway Department Survey, however, the bridge contains a plate bearing the name of Virginia Bridge & Iron Company. The bridge was
completed in 1935, and marked the completion of the Intracoastal Waterway in South Carolina. As a result, the opening celebration for the Waterway was held in Socastee in April, 1936. The bridge is in good condition and retains integrity.

Reflections on the Socastee Swing Bridge

The image below shows a view the Benjamin E. Thrillkill, Jr. fixed-span bridge as it was captured from the swing bridge. Photographer Austin Bond shares his experience: “I was blessed to watch this amazing sunset with my daughters. I was driving back from visiting my dad at Conway Hospital and stopped when I saw this sunset. It was a wonderful break from the busyness and chaos of everyday life … for a few minutes I got to spend time with those who matter so much to me and no worries from life even crossed my mind. I’m thankful that God gives us moments like these. Sometimes you have to pull off the road and make an unplanned stop to focus on what matters most.” 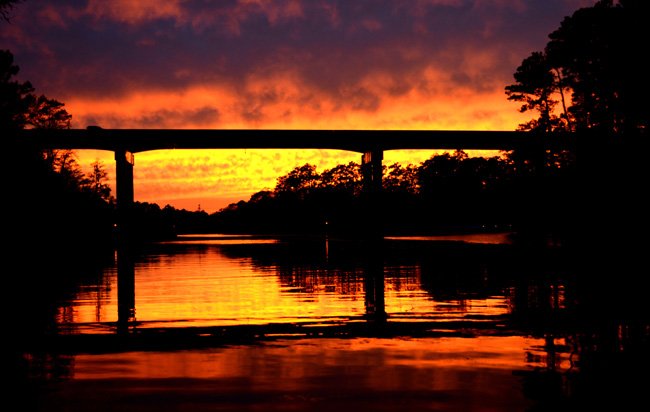