This lovely but unassuming church in Grahamville, South Carolina, holds quite a distinction – it is home to the second oldest Baptist congregation in the South! Euhaw Baptist Church was established on Edisto Island in 1686 by Scottish dissenters. It began as a branch of First Baptist Church in Charleston (founded in 1682). In 1745 a faction broke away to became an independent church, and members of Euhaw Baptist Church then relocated to Grahamville in Jasper County. 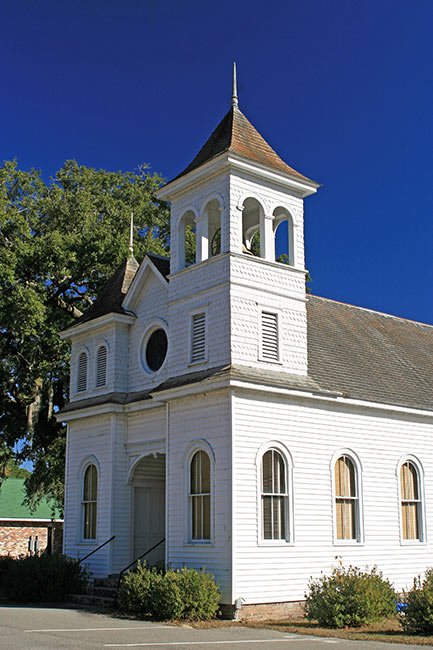 Settling in a spot near Euhaw Creek, the congregation dedicated its first Grahamville edifice in 1751 (2). That church, which burned in 1857, was located six miles northeast of the existing one, which was completed in 1860 (3). This region of South Carolina was once known as the Euhaws – meaning the “Land of the Indians” – in honor of the Native American tribes that once lived here. The original Grahamville church is said to have held more than 1,000 people, most of them slaves (4). 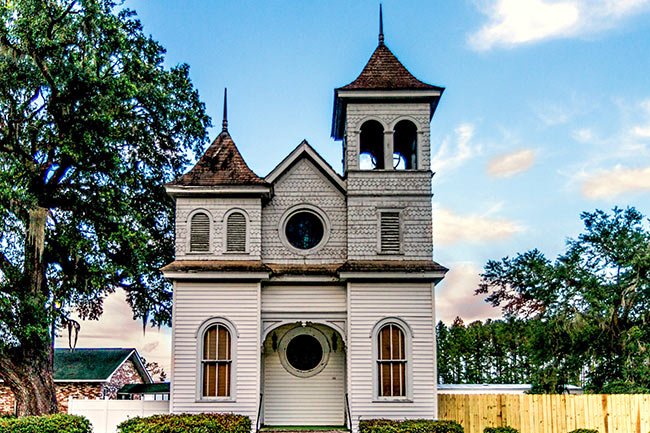 Euhaw Church was especially influential as the Baptist denomination spread through the South. It is the mother church of several other churches, and the first president of the Southern Baptist Convention, William B. Johnson, was ordained at Euhaw and ministered here for three years. 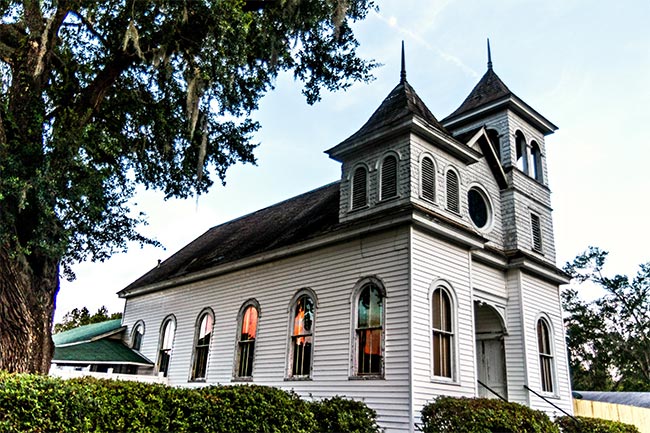 Another fascinating fact about the old church is that it periodically served as a schoolhouse, and among its teachers was the famous Unionist, James Petigru, who taught students here for three years (5). Later in life, Petigru became an important force in antebellum South Carolina. A judge, a state representative, and the Attorney General of South Carolina, Petigru argued against both nullification and secession. The tide of public opinion swept past him, however, and South Carolina was the first state to leave the Union. Today Petigru is remembered for his words, “South Carolina is too small to be a Republic, and too large to be an insane asylum.” 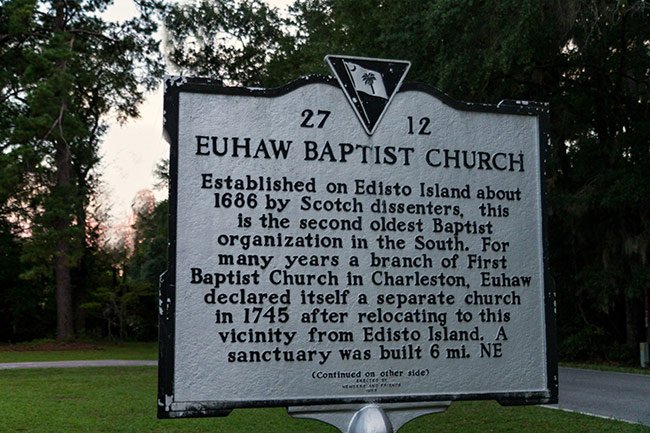 Grahamville, now considered part of Ridgeland, was founded as a summer retreat for planters (6) following the Revolutionary War. With the relocation of Euhaw Baptist, it became a veritable town. Unfortunately, the advent of the Civil War saw the departure of many Grahamville men, as they left to serve in the Confederate Army. Partially in consequence, worship at the church temporarily ceased. 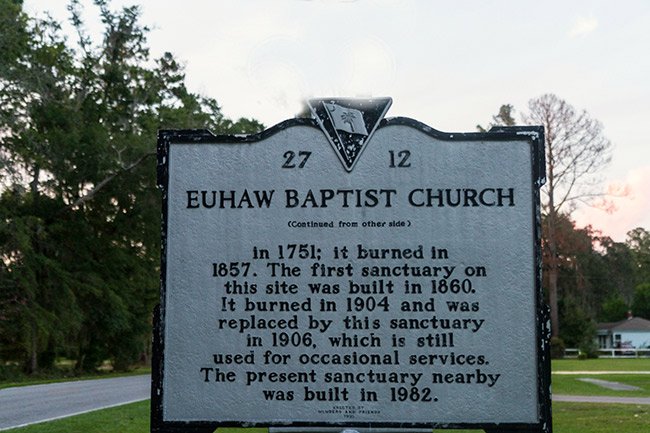 When Union soldiers marched through Grahamville, they set fire to most of the buildings – including the original Euhaw Church. The church was able to be restored however. Sadly another fire demolished it in 1904 (7). The church you see today dates to 1906. It is still used on special occasions, but a newer, more modern building, constructed in 1982 (8), hosts Euhaw Baptist’s regular Sunday services.

Ms. Perry apparently did not copyright her original 66-page book, but rights are now be owned by her heirs. We are grateful to long-time friend and respected historian Frank O. Clark for translating her complete work on his website, and also for doing so much to document South Carolina’s history in general.

Note that there are an abundance of dates attached to the members’ split, their establishment at Grahamville, and their construction of the original Euhaw Baptist Church. So many dates are claimed, in fact, that it is daunting to convey them.

For example, in his article, referenced below, journalist David Lauderdale gives the relocation year as 1737. Other research indicates it was actually in 1742 or 1745. The former, in fact, is the year that appears on the historical marker at Euhaw’s own churchyard, yet the latter is the date given on the church’s own website.

Our source for both 1 and 2 is Grace Fox Perry, author of Moving Finger of Jasper, who says the following:

In 1745, certain planters of the Euhaw or “Indian Lands,” who had worshiped formerly on Edisto Island, organized a Baptist Church in “the neighborhood of Euhaw Creek.” The location is some six miles east of the present village of Grahamville. An acre of ground for the initial building was donated by George Pelot. Recorded names of these organizing Baptists were Joseph Cook, Charles Bealer, John Rose, William Hogg, Joseph Hill, John Screven, William Cheyney and Josiah Hart. Other names of families associated with the church’s early history were Mills, Boyd, Pelot, Postell and Sealy.

Apparently, several years elapsed before that first structure was completed. Called by a writer “capacious but humble,” it provided seating space for more than 1000 Negro slaves of these religious pioneers. And who should appear on this Baptist scene at the opportune moment but the celebrated Methodist evangelist, George Whitefield! A writer of the time tells it thus:

“As soon as the place of worship was finished Mr. Whitefield came this way and, as it were, consecrated it by celebrating divine service in it for the first time, March 5, 1751.”

Please let us know if you have a primary source record that can help us solve this mystery. Thanks!

Here again, dates differ. The historical marker states 1982, while both Lauderdale and the official brief state 1985.