This church, built in 1838, is one of the last remaining buildings in the old Jasper County town of Gillisonville. The congregation formed around 1836 as the summer church for neighboring Coosawhatchie Baptist Church on the Coosawhatchie River. Many lowcountry churches – even entire communities – relocated during the summer months to nearby dryer places as a reprieve from boggy land and subsequent mosquitoes. The church was formally renamed Gillisonville Baptist Church in 1886. 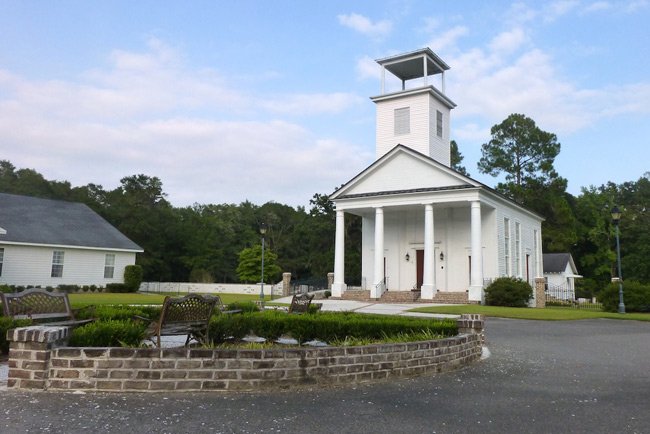 The town was burned in 1865 by Sherman’s Army, who etched “War of 1861 & 62 & 63 & 64 Feb. 1865. This is done by a Yankee Soldier,” into the church’s communion silver. It was constructed by local craftsmen and still has many of its original features such as boxed pews, random width flooring, and a slave balcony in back. 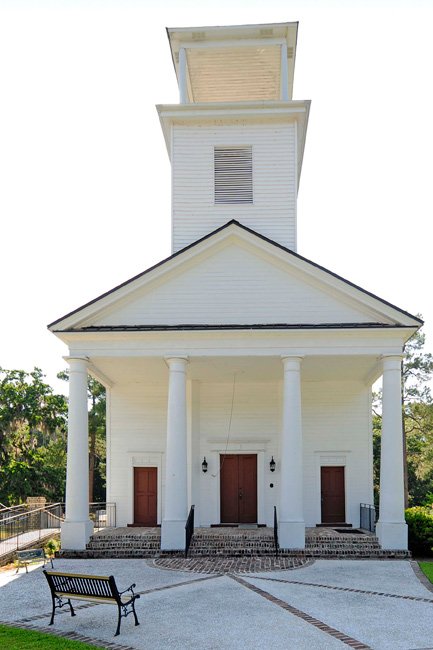 Gillisonville Baptist Church is listed in the National Register:

The church and a dwelling are the remains of the old town of Gillisonville (one-time seat of the old Beaufort District), which was burned by Sherman’s Army in 1865. The church was constituted in 1832 as the summer home of Coosawatchie Baptist Church so it might escape the insects and “fever” of the hot summer months. It was built in 1838 and named Gillisonville Baptist Church in 1885. The Greek Revival style church is sheathed in white clapboard with brick foundation piers.

The portico is supported by Doric columns on pedestals, and has a gable roof. The square tower which rises from the gable ridge pole contains two sections. The first is enclosed but possesses a section which may have been open formerly. The second, which contains the bell, is open. Its roof is supported by four round columns. It was apparently constructed by local craftsmen and possesses many original features such as boxed pews, random width flooring, and a former slave balcony in the rear supported by chamfered columns. The church and cemetery is surrounded by ancient moss laden trees. The church was used as headquarters for a contingent of Union troops during the Civil War. The old communion set was etched by a Union soldier “War of 1861-2-3-4. Feb. 1865. This is done by a Yankee soldier.