Liberty Hill in Kershaw County was established circa 1813 near merchant Peter Garlick’s store. It is believed that the community was named by patriotic settlers celebrating their newfound freedom after the Revolutionary War. In the following years, grand plantation homes were built, and antebellum Liberty Hill was among the wealthiest communities in South Carolina. After the Civil War, the area fell into economic ruin. 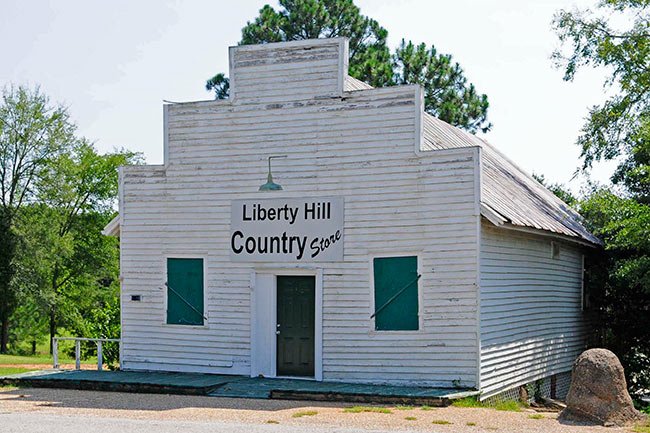 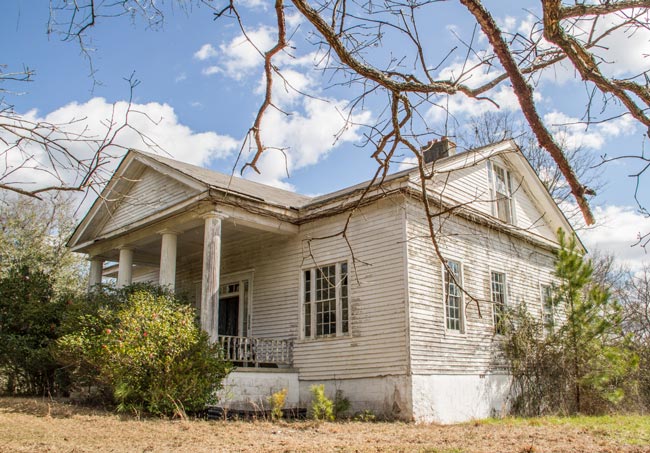 The R. J. Wardlaw Store and many of Liberty Hill’s other historic buildings are still intact and are listed in the National Register as part of the Liberty Hill Historic District:

A small rural community located on a high plateau, Liberty Hill visually and historically reflects both the life-style and the architecture of the pre-Civil War period as well as the turn of the twentieth century. There are several imposing Greek Revival structures, Greek Revival cottages, and an 1880s vernacular Gothic Revival church. The later, turn of the century residences are primarily one-stop, simple clapboard cottages.

The town’s history begins as early as ca. 1813 when Peter Garlick’s store (location unknown) was a gathering place for surrounding farmers. Soon, impressive structures were built by planters in the area. Remaining from the 1830s are Cool Spring and the Joseph Cunningham House. The majority of the town’s antebellum buildings, however, were built ca. 1840-1850. During this period Liberty Hill was a very wealthy community. However, the final days of the Civil War ended that prosperity. Nevertheless, the town did eventually reassert itself and appears to have changed very little since the beginning of the twentieth century.

The following notes were compiled by Liberty Hill native Louise Johnston, who submitted them to the 1966 edition of Names in South Carolina, a publication of the University of South Carolina which was edited by Dr. Claude Neuffer.

“Miss Louise Johnson has sent an interesting account of her native village of Liberty Hill, one of the oldest settlements between the sandhills and the piedmont.: “On Highway 97 (also called the John G. Richards Highway), Liberty Hill is on a high narrow plateau, affording [a] beautiful and extensive view over a vast amphitheater into the counties of Kershaw, Fairfield, Chester, and Lancaster.

‘There was a settlement at Liberty Hill as early as 1813 when Peter Garlick’s store was a gathering place for farmers of the surrounding country. Early in the 19th Century the wealthy planters began moving their residence there, where they built mansions typical of the period when southern hospitality was in flower.

‘In 1858 the Liberty Hill Community was one of the wealthiest in the state, for every landowner possessed large estates and many slaves. Among the families were the Pattersons, Thompsons, Joneses, Georges, Cunningahams, Curetons, Dixons, Browns, McDows, Perrys, Braces, Gilberts, Mathesons, and Williamses. Later two other families who moved there were the Richardses and Floyds.

‘The greater part of Sherman’s army crossed the Wateree River at Peay’s ferry and camped at Liberty Hill for nine days, plundering the homes, carrying away treasured heirlooms and everything of value; they also urned the beautiful homes of Joseph Patterson and Robert Cunningham, the local academy, and a tannery owned by John Brown.

‘By the close of the Confederate War, the entire community had been reduced to a state of abject poverty. Freedom of the slaves, destruction of property by Sherman’s army, and demoralization of business in general all had contributed to reducing this once proud and wealthy people to a condition of helplessness and despair.

‘Since Liberty Hill was an agricultural community, it was slow to adjust to new conditions during the Reconstruction Period, and many of the young men left home for more promising field.’

Miss Johnston notes further that the name of her town is near self-evident; that in the post-Revolutionary Period it was a settlement in the hills of a people who loved liberty.”