Felix Anthony “Doc” Blanchard, a native of McColl, holds the distinction of being the only South Carolinian ever to win college football’s Heisman Trophy. He also won a medal for his exemplary service during the Vietnam War. The town of Bishopville celebrates Blanchard’s life with the impressive monument shown here. 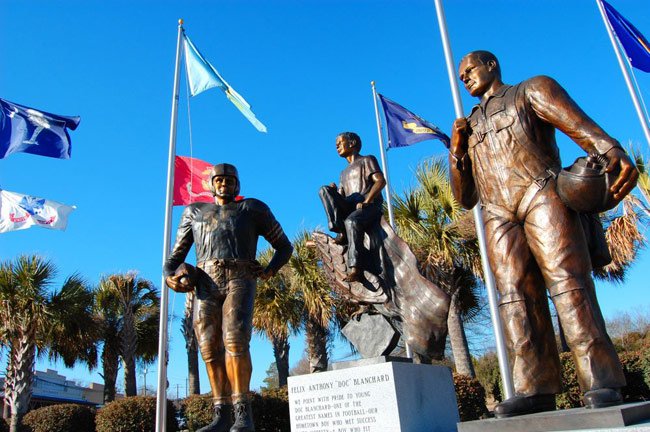 Maxi Farnsworth of Greenville, 2011 © Do Not Use Without Written Consent

Maxi Farnsworth shared the photo above and sends along the following info: “I took this photo of Bishopville’s Doc Blanchard memorial back in January. Blanchard, a native of McColl, grew up in Bishopville. Sculptor Robert Allison masterfully captured Doc’s life in three stages. The three statues represent Blanchard’s boyhood, football career at Army and career as an Air Force pilot.

“Born as Felix Anthony Blanchard, Doc was given the nickname “Little Doc” as he was the son of a doctor. His nickname became “Doc” in junior high. Doc followed his father’s footsteps as a college football star, signing with UNC out of high school. Blanchard transferred to Army in 1944. Doc teamed with Glenn Davis to create one of college football’s finest backfield duos. Blanchard was nicknamed “Mr. Inside” for his bruising runs between the tackles. Doc was a three time All-American at West Point from 1944-46. Blanchard became the first SC native to win the Heisman Trophy when he collected the 1945 trophy. After his career Doc Blanchard became a pilot in the US Air Force, winning a medal for bravery during the Vietnam War. Blanchard passed away on April 19, 2009 at the age of 84. Blanchard remains the only SC native to win the Heisman.”