The Ashwood community in Lee County was developed in the 1930s as part of President Franklin Roosevelt’s New Deal. After the stock market crash of 1929, President Roosevelt created a plan to help impoverished Americans, particularly rural Southerners and tenant farmers, become self-sufficient. The Resettlement Administration Projects, part of the New Deal, would convert defunct farmland into workable farms owned by residents and surrounded by a community of support facilities such as schools, barns, and silos. 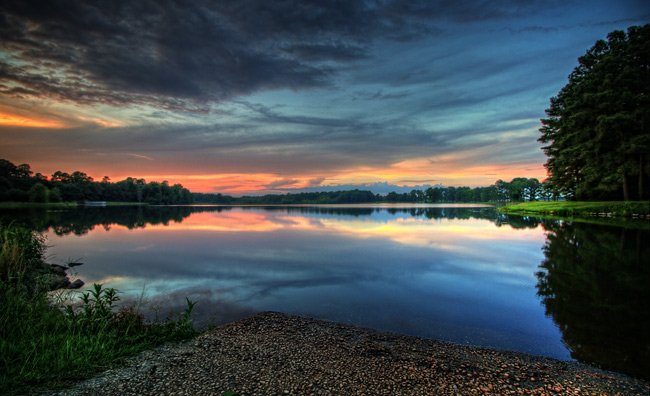 E.M. Jackson of Bishopville, 2014 © Do Not Use Without Written Consent

Parts of rural Lee County qualified for the Resettlement Project, and Ashwood was formed near Bishopville. Ashwood consisted mostly of small, independent farms and included a building that functioned as a school, a gymnasium, and a community gathering place. Lake Ashwood, seen above and at the bottom of this page, was built as part of the agricultural development of the community. Today the 75-acre lake remains a popular fishing spot. 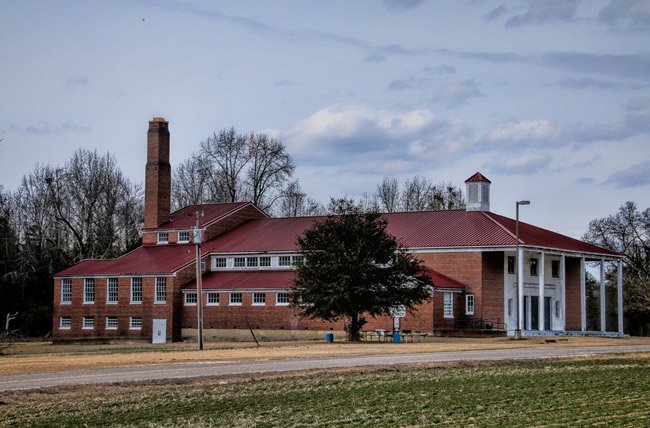 The Ashwood School Gymnasium was built in 1938 and quickly became a place where residents could congregate for plays, concerts, community meetings, and sports after school hours. The school is no longer in operation, though the gymnasium building still serves as a community center for the people of Ashwood. 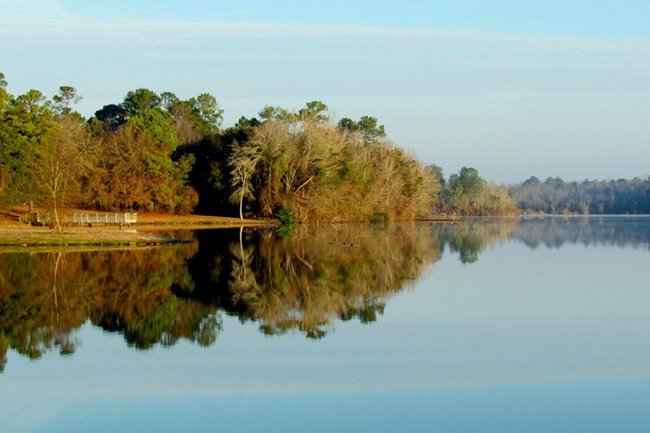 E.M. Jackson of Bishopville, 2014 © Do Not Use Without Written Consent

The Ashwood School Gymnasium are listed in the National Register:

The Ashwood School Gymnasium and Auditorium was built in 1938 to serve Ashwood Plantation, the first and largest of the Resettlement Administration (RA) project tracts in South Carolina. It is significant for the role it has played in politics and government and the social history of the Lee County community, and architecturally as an excellent and remarkably intact example of Resettlement Administration Architecture in South Carolina. It is the most significant and intact manifestation of the Ashwood resettlement project remaining in what was once a vibrant farming community.

The Ashwood community was created by the New Deal resettlement program to convert defunct plantation or farm land into a self-sustaining community of independent farms with educational, agricultural, and commercial support facilities. The building served as the school and community gymnasium for athletics, dances, and community meetings and as an auditorium for dramatic performances and films, in a rural place in the time before television and mass media. The school itself is no longer extant. As a part of the ambitious Ashwood project, the gymnasium/auditorium served an important role in the Resettlement Administration and New Deal’s goals to improve the health and education of the poorer classes, especially that of Southern tenant farmers. The simplified Colonial Revival architecture reflects a style that was popular nationwide in the 1930s, especially in government-sponsored construction, but also the economic situation of the era and the rural Southern character of its surroundings.

We would like to add more information about Ashwood, as well as a picture of the Ashwood School Gymnasium. If you can contribute either, please let us know. Thank you for helping to make the South Carolina Picture Project more complete!

Reflections on the Ashwood Gymnasium

Maureen Christopher share the following: “My husband, Coach Dick Christopher, spent many hours in that sports gymnasium from 1967 through 1971. He was the school’s Assistant Principal and Athletic Director, P.E. Teacher, and baseball coach and basketball coach. He loved Ashwood Central High School! His red Volvo was seen often in yearbook pictures. He often told me that he would pile the young athletes in the back of the Volvo and take them to the colleges on the weekends to football games to show them what they could aspire to – college! He also said he kept the gym open on the weekends so they could practice their basketball skills. And that they did, as they won many games! Fisher DeBerry is a friend of ours, and he said that he refereed many of Coach Christopher’s games in that gym.

“Fisher and Dick later went on to coach football at Appalachian State University in Boone, North Carolina. Dick received his Master’s degree in coaching, but he always said that he loved being at Ashwood Central High School! The kids dedicated the 1970 Ram Yearbook to him, too! I believe he was the head baseball coach when they won the baseball runner up title in the 1967-1968 school year. He spoke of that game often.

“We brought Coach Christopher to the reunion in 2015 and had a great time! Former students cried when they saw him. He had had a stroke, but he knew them all. The cheerleaders told me what a great role model he had been and that he had also coached them in girls’ basketball. It was all so exciting for him to be there. As he raised his hand when I was turning the car around, he said. “Wait…” He had recognized that gym. It was heartbreaking!”