This historic courthouse in Lexington is one of many that have served the citizens of Lexington County. The first was built around 1785 near Cayce in a village known as Granby (no longer extant). As farmers in Granby began to cut trees to create cotton fields, the area became beset by floods, prompting residents to move to higher ground. In 1820 the community relocated to a nearby ridge along Twelve Mile Creek in present-day Lexington. A second courthouse, made of wood, was constructed that same year, and the town became known as Lexington Courthouse. 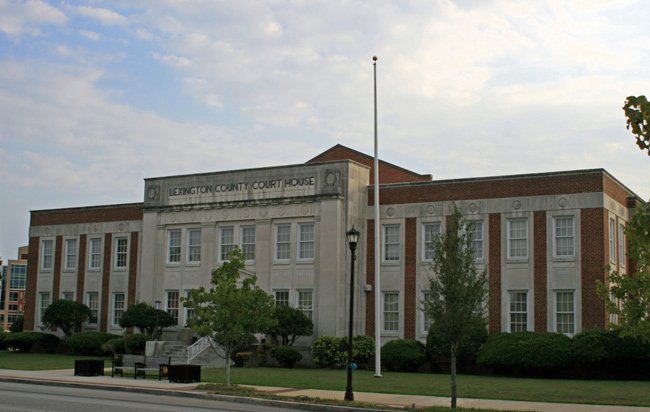 In 1838 a granite courthouse, influenced by designs of architect Robert Mills, replaced the wooden building. That structure was burned by Union troops during the Civil War, destroying all county records prior to 1839. A log cabin was built to serve as a courthouse in 1868, but by 1884 a brick courthouse was constructed in its place, seen in the undated photo below. The courthouse at the top of the page supplanted the 1884 brick one in 1939. It was designed by Columbia architect J. Carroll Johnson and was built as a Public Works Administration (PWA) project as part of the New Deal. The 1884 courthouse was torn down during the 1950s. 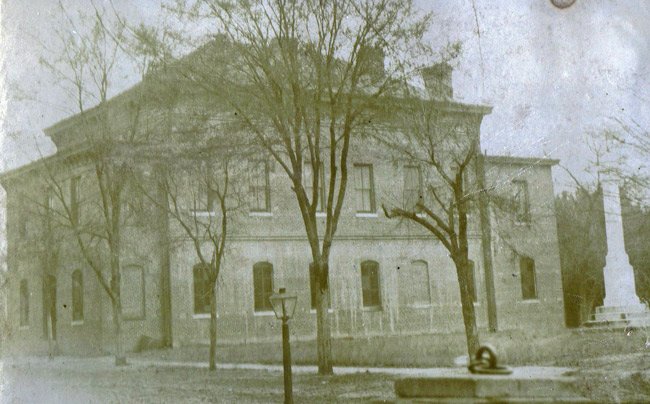 A block away is the modern Marc J. Westbrook Judicial Center, completed in 2003. It was renamed in 2006 in honor of the late Judge Marc J. Westbrook, who died in a car accident on September 15, 2005 along with his law clerk, Randall Davis, Jr. The historic courthouse continues to serve residents of Lexington County as a magistrate court.

Lexington County Museum, 1940 © Do Not Use Without Written Consent

The Old Lexington County Courthouse is listed in the National Register:

The Lexington County Courthouse is eligible for listing in the National Register of Historic Places at the local level of significance under Criterion C for Architecture. As a Public Works Administration (P .W.A.) project, the courthouse exhibits the modern yet restrained classical architectural elements typical of New Deal buildings. This Modern Classic style is rare for courthouses in South Carolina, as only one other National Register-listed county courthouse in the state (Beaufort) has a similar Depression-era design. Also, it is an excellent local example of the work of the well-known Columbia architect, J. Carroll Johnson, and designing partner of Lexington County native Jesse W. Wessinger, in the Columbia firm of Wessinger and Johnson. The courthouse is a good local example of the federal government’s involvement in South Carolina’s economy and architecture through the New Deal work relief projects.