This ornate brick church in Marion has humble roots dating from the late eighteenth century. Back in 1786 – when Marion County was still known as Liberty Precinct – two itinerant Methodist ministers would preach in this community as part of their Pee Dee circuit. The circuit was large, including more than 600 eager Methodists crowding into 22 meeting houses. One such meeting house was Flowers Meeting House in Marion, which Bishop Francis Asbury had scheduled to visit in 1789, according to his journal. He returned to Marion twice more in his lifetime. 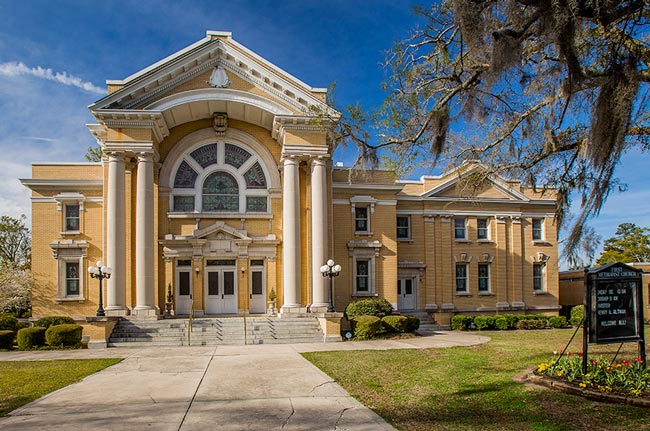 Prior to 1800, the members of Flowers Meeting House left their building for reasons unknown and attended a new church on Smith Swamp called Bethel Church. However, the fate of this church also is unknown, as by 1814 the Reverend Joseph Travis – who was also the local school teacher – was preaching from the courthouse due to the lack of a church in the area. Worship later was conducted in a new school house, located on the site of the current church. 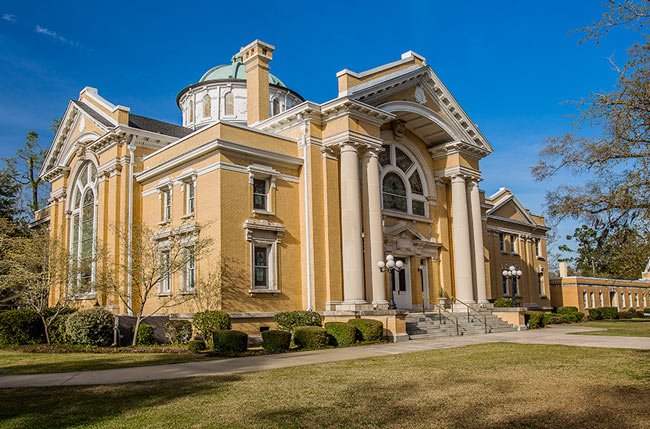 In 1833 Methodists built a church near the school house. However, the congregation outgrew this building within twenty years. At that time, the church and school agreed to trade properties, as students were vandalizing the cemetery behind the school. In 1853 a new frame church was built on the former site of the school. It was also this year that the church became independent of the circuit and employed its first permanent preacher. 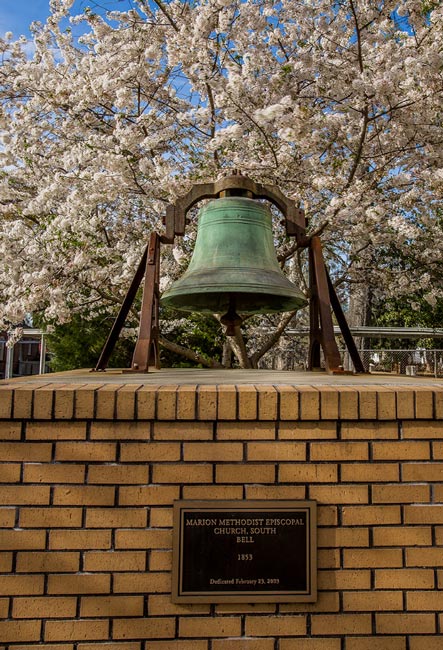 The church continued to grow, and by the early twentieth century, yet another building was constructed to accommodate the congregation. The frame building was torn down and this elaborate brick building was erected in its place, the cornerstone laid on September 12, 1912. Since then First Methodist Church of Marion has hosted the Annual Conference of the Methodist Church five times.

The Methodist District parsonage, built in the early 1850s alongside the previous church on this site, remains as offices and is listed in the National Register as part of the Marion Historic District :

The Marion Historic District includes both commercial and residential structures having both historical and architectural value. The residential structures are primarily wooden and are one or two stories high. The area is representative of the various styles of classically derived nineteenth century architecture. In evidence are the early frame structures of the 1800s, the antebellum houses with Greek Revival porticoes, the raised cottage style typical of the Pee Dee, and the Victorian homes of the turn of the century. Other styles include Romanesque Revival, Gothic Revival, Queen Anne, Colonial Revival, and Bungalow. The central business district retains visual continuity and unity in terms of height, scale and setback. The majority of these buildings are brick, one or two stories high, and situated along the sidewalk with no setback. As both a county seat and railroad town, Marion was important in the growth of South Carolina’s Pee Dee region. The town was named for Revolutionary War hero General Francis Marion.