The Edens Opera House in the small community of Clio once hosted big-city cultural entertainment. Clio grew quickly beginning in 1895 when the Florence Railroad extended its Latta branch to the town, allowing for travel and the shipping of their agricultural products. The economy boomed as a result, and the North and South Carolina Railway Company was operating here by 1908. 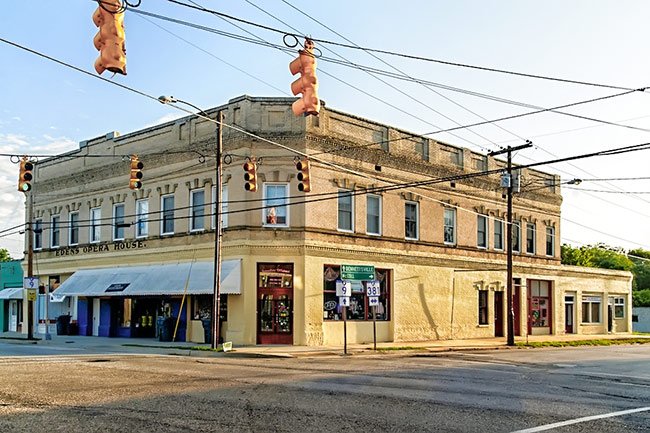 Lew G. Brown of Chapel Hill, NC, 2011 © Do Not Use Without Written Consent

With more and more people stopping in Clio en route from city to city, resident Jefferson D. Edens decided to capitalize on the transportation craze and built this entertainment venue in 1910. Traveling theater companies would perform here on their way from New York to Miami, much to the delight of locals and people from nearby communities who came into town for a night of pageantry. The theater operated through the middle of the twentieth century. Today the building operates as a storefront, though its Vaudevillian history still lingers in its name. 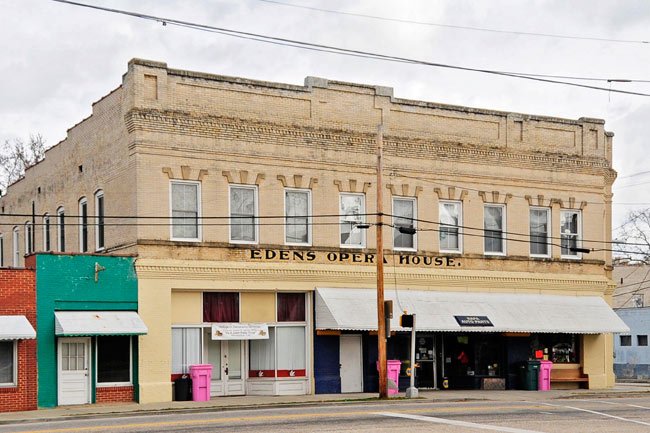 The Edens Opera House is listed in the National Register as part of the Clio Historic District, which adds the following about the area:

The Clio Historic District is notable as an unusually intact collection of late nineteenth and early twentieth century vernacular architectural design, including commercial, residential, and religious examples. Design influences include the Queen Anne, Victorian, Classical Revival, and Colonial Revival styles. The district centers along a downtown commercial district and extends outward to include significant residential sections of the town of Clio. Most of the properties were built or remodeled during the town’s boom period, from about 1895 until about 1920. The majority of these properties were constructed by local contractors without the help of an architect.

The district continues to retain a unique sense of place as a small turn-of-the-century South Carolina community. Historically, Clio is significant as an economic center of northeastern Marlboro County. Its growth and development consequently reflect the evolution of a small South Carolina community which felt the combined impact of the changes that occurred in the rural trading patterns of the nineteenth century South – of railroad expansion into agricultural areas during that period, and of the great increase in cotton production.