This house was constructed circa 1826 on four acres of land by Dr. E.W. Jones. One of the first homes built in Bennettsville, it is the town’s oldest remaining two-story residence. The next oldest two-story residence dates from 1853. 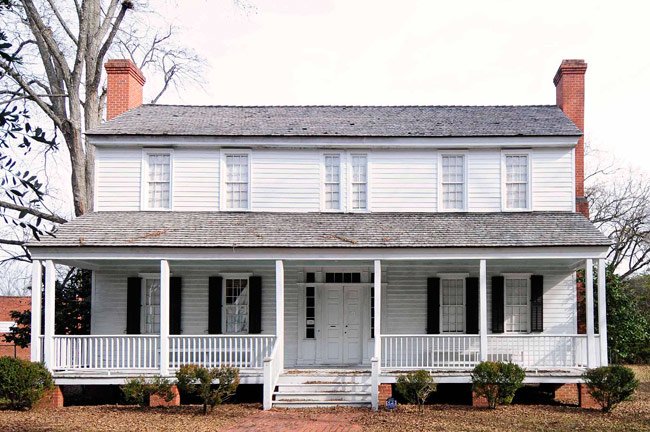 Dr. Jones sold the home to Dr. Beaty Jennings in 1854. Dr. Jennings owned the home until 1904, surviving its 1865 occupation by Union officer Major General F.P. Blair, who used the home as his headquarters during the Civil War.

In 1900 Dr. Jennings moved the house 100 yards, causing the structure to lose some of its original features such as the two exterior chimneys. Additions to the house were made after the move – including adding a gable to the front – and the chimneys were later replaced.

From 1930 through 1968 the home was owned by Dr. J.J. and Lura G. Brown. The Marlboro County Historical Museum has operated a house museum from the halls of this storied home since 1976.

The Jennings-Brown House is listed in the National Register, which says the following:

Architecturally, historically and militarily significant, the Jennings-Brown House was built by Dr. E.W. Jones, one of Bennettsville’s earliest physicians, on a four-acre site which he purchased in 1826-27. It was one of the first houses built after Bennettsville became the Marlboro County Seat in 1819. Architecturally, this house is important as Bennettsville’s only remaining two-story home built prior to 1853. It is recognized as a town and area landmark and before being moved in 1900 to 121 S. Marlboro Street and subsequently altered, was an authentic example of the fine homes built in this area ca. 1830. The house also served as headquarters for Major General Frank P. Blair, commanding general of the U.S.A. XVII Army Corps, which captured and occupied Bennettsville on March 6-7, 1865.