The Hope School Community Center – originally called the Hope Rosenwald School – is located in Newberry County in the Hope Station community near Pomaria. The school was built between 1925 and 1926 and served African-American children until the United States Supreme Court ruled against separate-but-equal laws in 1954. South Carolina consequently embarked on a building spree, erecting hundreds of Equalization Schools in an effort to forestall integration. Many small, historically-black schools – including this one – were consolidated at the time. 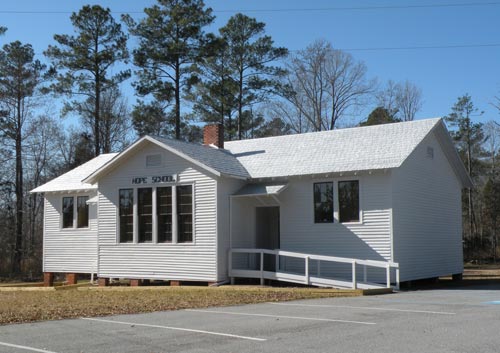 Between 1917 and 1932, some 500 schools were built in rural South Carolina to educate black students. They were called Rosenwald Schools in honor of Julius Rosenwald, president of Sears and Roebuck and a trustee of the Tuskegee Institute, who helped fund their construction. Local communities, both white and black, also contributed to the costs. The Hope School, built near the middle of this era, cost roughly $2,900 to complete. It had two rooms, two teachers, and housed grades one through eight. 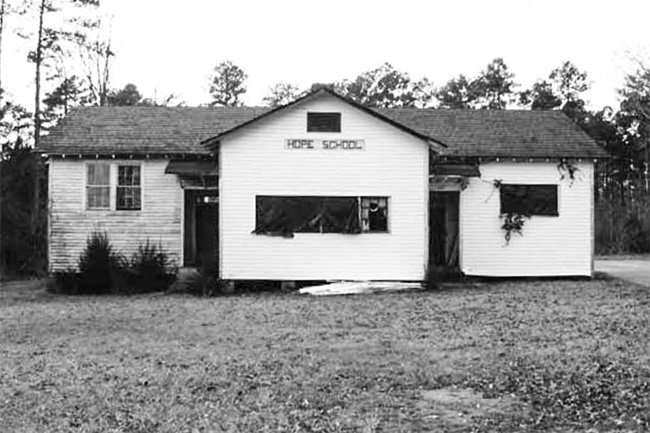 The school stands on two acres donated by the Hope family. James Haskill “Bud” Hope, together with his siblings, John Hope and Mary Hope Hipp, raised funds to purchase the land, and thus the school is named in their honor. Bud Hope was South Carolina’s longest-serving State Superintendent of Education. Elected in 1922 – just a few years before giving the land – he remained head of state schools until his retirement in 1946 at age 72. Oddly enough, given South Carolina’s history, Mr. Hope was a noted advocate for black students. For example, African-American pupils were awarded high school diplomas for the first time during his tenure. 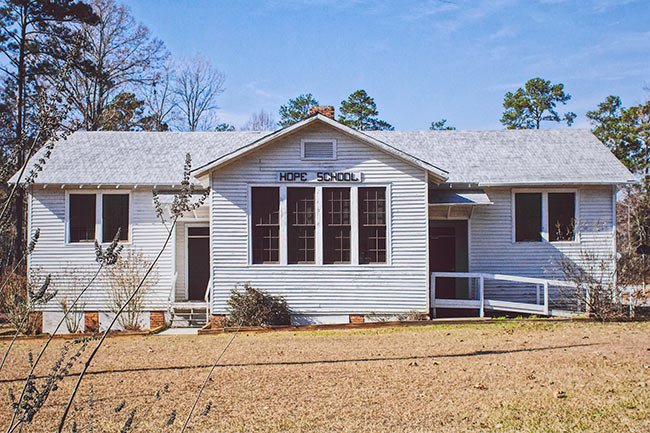 In 1958, four years after the Hope School closed, it was purchased for $500 by the Jackson Community Center and Cemetery Association, a coalition of nine members of the adjacent St. Paul A.M.E. Church. It was used by the church as storage and meeting space until 2007, when it was listed in the National Register. At that time, locals and alumni began a restoration effort, and in 2009, the school was rededicated as Hope School Community Center.

The desks pictured below were once used by students of Hope School. They are now on permanent display at the National Museum of African American History and Culture in Washington, DC. 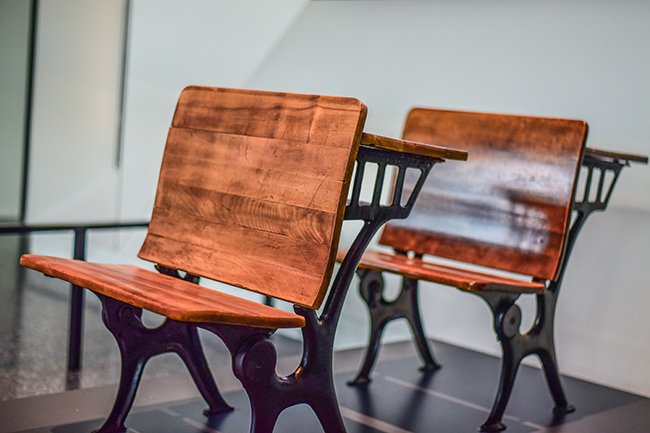 Angela N. Washington, DC, 2016 © Do Not Use Without Written Consent

As noted above, the Hope Rosenwald School is listed in the National Register:

The Hope Rosenwald School is significant for its role in African-American education and social history in South Carolina between 1925 and 1954, and as a property that embodies the distinctive features of a significant architectural type and method of schoolhouse construction popular throughout the southern United States in the early twentieth century. Like other Rosenwald schools, the Hope Rosenwald School can trace its origins to the contentious debate over the education of southern African-Americans in the late nineteenth and early twentieth centuries.

While the end of the American Civil War had brought about state-initiated funding and operation of some local schools for black children in the South, the policies emphasizing racial segregation during the Jim Crow era left southern blacks with few opportunities for a truly complete primary education and even fewer secondary school options. Among those who sought a method for insuring that black educational opportunities in the South might be improved was Julius Rosenwald, CEO of Sears & Roebuck and a trustee of the Tuskegee Normal and Industrial Institute. At the request of Booker T. Washington, Rosenwald began a school building fund to benefit southern African-Americans, especially those in rural regions, and from 1917 to 1932, Rosenwald’s program led to the construction of more than 5300 public schools, teachers’ homes, and instructional shops in fifteen southern states, nearly 500 of which were located in South Carolina.