Mountain Rest is located in Oconee County, near the Georgia / South Carolina border. It is part of the Andrew Pickens Ranger District within the Sumter National Forest, and is a great place to escape from the busy city life for many South Carolinians. 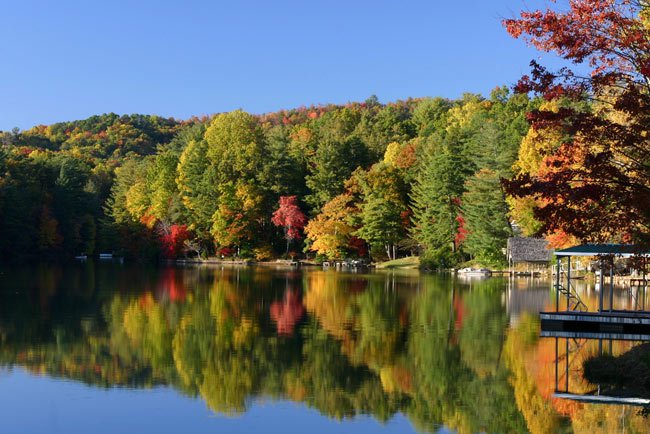 Gary DuBose of Seneca, 2008 © Do Not Use Without Written Consent

Oconee is a Cherokee word which means “land beside the water” which perfectly describes this beautiful county that is peppered with lakes and rivers, and framed by Lake Keowee and Lake Jocassee. The Cherokee Indians inhabited this area in the northwest corner of our state for many generations, until they relinquished their lands in treaties signed in 1777 and 1816.

Settlers from around South Carolina moved to this area after the American Revolution and eventually founded the town of Walhalla in 1850. Oconee County was formed soon after from part of the Pickens District.

The famous Stumphouse Tunnel is near Walhalla, which was part of the Blue Ridge Railroad system. It was originally designed to connect Charleston with Knoxville, TN until the Civil War halted construction permanently.

Contributor Gary DuBose shares: “I took this picture just before sunset on a fall afternoon. With absolutely no wind that day, the fall colors were wonderfully reflected in the calm water.”