Comedian and South Carolina native Stephen Colbert once famously admonished Georgia for calling itself the peach state, noting that South Carolina produces not just more peaches – 90,000 tons a year – but much tastier varieties as well. In fact, peaches are so important to South Carolina that Clemson University employs a “Peach Team” to grow and research 350 different types of the fuzzy fruit at the Musser Fruit Research Farm in Seneca. 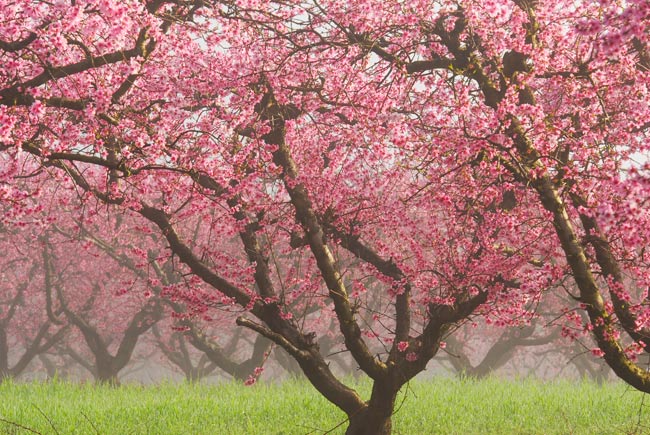 Mark VanDyke of Herndon, VA, 2013 © Do Not Use Without Written Consent

Surrounded by Lake Hartwell on three sides, this farm saw its first trees planted in 1984, followed by the construction of its research building in 1994. Its location on the lake helps buffer the trees from spring freezes, and the results from research help bolster the fruit industry for South Carolina growers. Only California grows more peaches.

The South Carolina Picture Project thanks contributor Mark VanDyke for his photo. VanDyke goes on to say the following about Musser Fruit Research Farm:

“The Musser property is a 240-acre fruit research farm owned and operated by Clemson University. I believe it is best known for its commercial peach cultivars, however, there are nectarine, almond, apricot, plum, and cherry trees on the property. According to the website, the farm is bordered on three sides by Lake Hartwell which in effect regulates the microclimate. The first trees were planted in 1984 and the farm was officially dedicated in 1994. The entire farm and its buildings were constructed via a state bond of $1.5 million to improve fruit research facilities at Clemson University.”