Retreat Rosenwald School was built in 1924 to serve black students in the outskirts of Westminster. Between 1917 and 1932, over 5,000 schools were constructed in the rural South to educate African-American children. They were called Rosenwald Schools in honor of Julius Rosenwald, then-president of Sears and Roebuck, who provided funds to assist in their construction. Retreat School was one of ten Rosenwald Schools built in Oconee County and served students until 1950 when the school closed due to low enrollment. 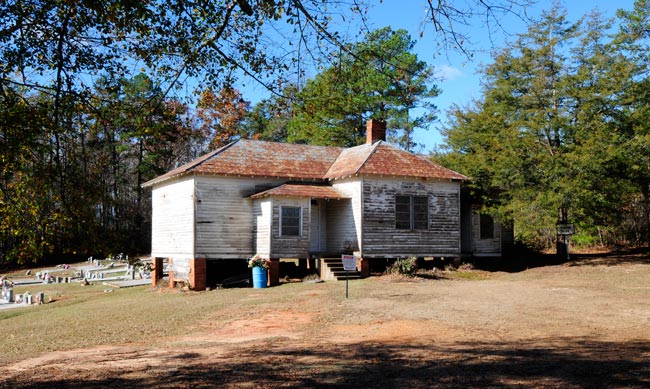 The building’s simple design reflects that of many other two-teacher Rosenwald Schools with the exception of the northwest-to-southeast orientation. Most of the plans called for a strict north-south orientation. However, this orientation permits the school to face the road, and its position also allows more light into the school during the dark winter months. Proper light and ventilation were significant components of Rosenwald School designs. 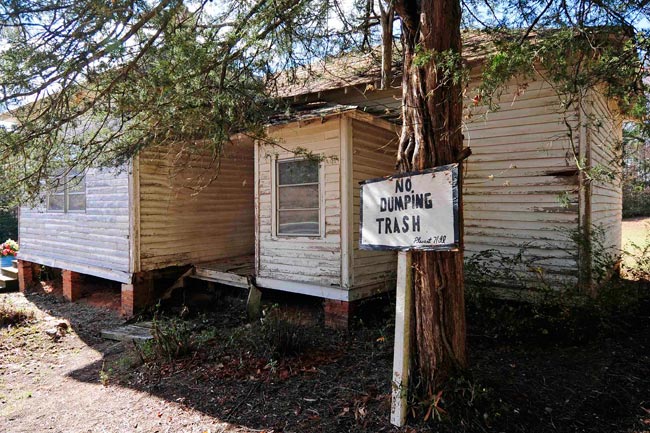 The school also originally included two privies 500 feet behind the school and a well house which sat 75 feet in front of the school. The outbuildings are no longer extant. A partition in the school building allowed the upper and lower grades to be separated during school, but the dividing wall was removable so that a large space could be created for other uses. This expanded space was important, as the school also served as the local community center.

Many Rosenwald Schools were partly sponsored by African-American churches, and Retreat School is no different. The school sits on 2.55 acres donated by neighboring Pleasant Hill Baptist Church, a black church established after the Civil War. The congregation met in a one-room meeting house-style church during the 1870s. Education was important to the church, which held reading classes on Sundays following worship. A black school historically called the “Negro School House” was built next to the cemetery of Pleasant Hill Baptist Church, yet it sat on property owned by a white man named M.S.H. Snead. By 1909 the Oconee County School Board was making plans to relocate the school to black-owned land. Pleasant Hill Baptist Church donated the land adjacent to it sanctuary, and by 1924 Retreat Rosenwald School – named for the nearby rural community then-known as Bachelor’s Retreat – was completed and in use. Evening classes as well as day classes were held at the school.

The school that began with 99 students saw its enrollment diminish significantly by the 1930s and 1940s. By 1950 the school closed, and its students were sent to Westminster Colored School in downtown Westminster. Members of Pleasant Hill Baptist Church then bought the school from its trustees and have used the building for a variety of purposes, including as a house of worship in the 1960s while a new church building was being constructed.

Retreat Rosenwald School is listed in the National Register:

The Retreat Rosenwald School, built in 1924, is significant for its association with African American public education during the first half of the twentieth century and as an extant example of an architectural design typically associated with the schools funded in part by Julius Rosenwald. The Julius Rosenwald Fund sought to improve schools for African Americans in the rural South. In addition to their architectural significance, extant Rosenwald Schools reflect the struggle of black communities to give their children better educational opportunities. Rosenwald schools also reflect the strong bonds of community: the public space became an important social center for rural blacks. The Retreat Rosenwald School was completed for a total cost of $2,300, including $700 from the Julius Rosenwald Fund. It was one of ten Rosenwald Schools built in Oconee County; the only other one extant is in Seneca.

The building is T-shaped with entrances on either side of the forward wing. Each has a small-engaged porch which opens into a classroom. The floor plan is typical of a two-teacher community school, floor plan number 20-A, recommended in Bulletin No. 3 by the Julius Rosenwald Fund. The building has three main rooms consisting of two classrooms and an industrial room in the forward-projecting wing. The two classrooms were separated by a detachable dividing wall. The school is situated with a northwest to southeast orientation. This deviates somewhat from the specifications laid out by Samuel L. Smith’s Community School Plans for Rosenwald Schools, which calls for a north-south orientation. The school’s orientation is parallel to the road, however, and the southwest orientation of the large windows would increase the amount of sunlight in the winter and decrease it in the summer. The school served the African American community in the Westminster area from 1924 until 1950, when the Retreat Rosenwald School was closed because student enrollment had decreased significantly.