A sheet metal likeness of a coffeepot sits atop a defunct diner in the rural Orangeburg County town of Cordova. The former restaurant conspicuously marked by this sculpture was called – what else? – the Coffee Pot Diner and served hungry travelers along US 301 from around 1950 until 1979. While the diner is no longer in business, its larger-than-life coffee pot, standing at six feet and weighing 250 pounds, still attracts photographers and those in search of roadside curiosities. 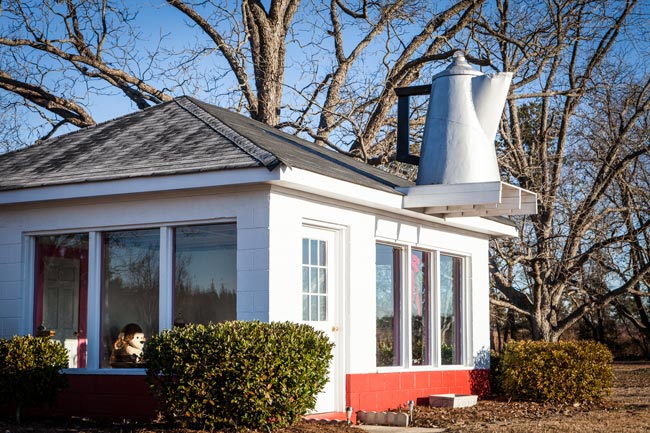 The small, white block building sits on 2.6 acres of land once owned by Thomas Woodrow Gray. Gray, an amateur boxer and one of 13 children, lived in a white house near the restaurant’s future location.

In 1950, Gray sold his land to a British couple who had moved south from Niagra Falls, New York. The couple – the late Emily and Frederick Griffin – initially moved to Florida from New York, but shortly after settling there, they decided to move slightly north and open a tearoom.

The Griffins then purchased a restaurant in Jesup, Georgia, but the sale collapsed before they could take ownership. Figuring they had nothing to lose, legend holds that Frederick blindly pointed to a map and declared wherever his finger landed would be their next home. His finger landed in Cordova, South Carolina. 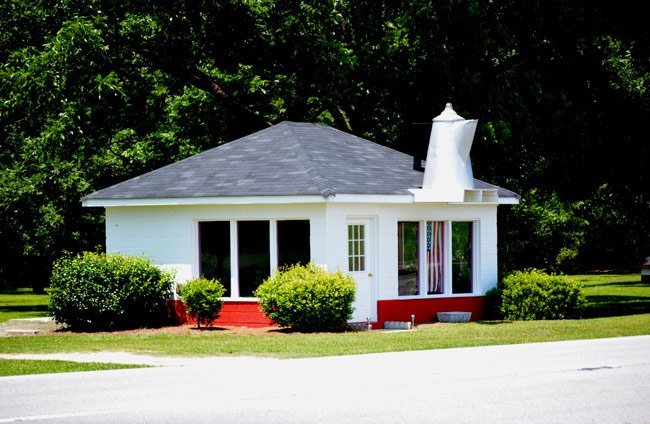 David Shull of Elloree, 2014 © Do Not Use Without Written Consent

Once the Griffins relocated to the area, which was surrounded mostly by farmland, they thought it wise to forgo their plans for a tearoom in favor of a diner, which they suspected would be more appealing to their hard-working clientele. The Griffins were right, and their prime location on Highway 301 served the business well until Interstate 95 rerouted customers.

The Griffins had no children and wanted to offer the Gray family the opportunity to purchase the land after their deaths. Thomas Gray’s son, Thomas “Buck” Gray, bought the land in 2008. While he has no plans to reopen the restaurant, he does maintain its iconic coffee pot.

In fact, after the giant coffee pot was knocked from its perch during a storm in January 2013, Gray wasted no time repairing and replacing the local landmark.