This Greek Revival church stands adjacent to a modern church on United States Highway 301 just outside of Orangeburg, though the two churches are unrelated. Called Zion Methodist Church, this church is believed to house one of Orangeburg County‘s earliest congregations. The first church building to house Zion Methodist was built prior to the Civil War; this sanctuary replaced the that one in 1880. 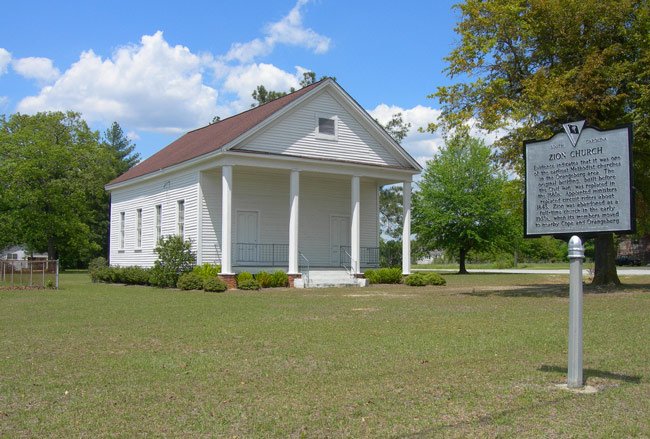 As Methodism spread in the late eighteenth and early nineteenth centuries, preachers riding circuits would visit groups gathered together for sermons. After the denomination became established in the United States and churches formed as a result, permanent ministers were assigned. Zion Church received its first permanent minister in 1843. In the 1930s, church members began attending other nearby churches in more developed areas such as downtown Orangeburg and even neighboring Cope. Subsequently, Zion Methodist closed its doors. However, the sanctuary and churchyard are maintained by the Committee for Restoration and Preservation of Zion Church and Cemetery.