Anyone familiar with South Carolina Highway 11 will recognize this roadside venue. Reminiscent of the chalets found in Gatlinburg, Tennessee or Helen, Georgia, this lodge in the Pickens County community of Pumpkintown attracts motorists searching for a fun rest stop. With convenient access to nearby Caesar’s Head, Table Rock, and Sassafras Mountain, Pumpkintown is a top destination for travelers to the South Carolina Foothills. 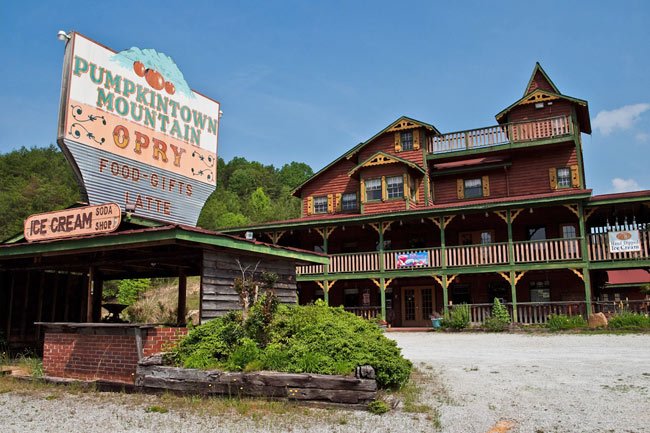 Bill Herndon of Washington, DC 2010 © Do Not Use Without Written Consent

The opry house, seen above, was built in 1986 by the Aartun family. The family of contractors claims to have used old-world craftsmanship in the construction of not only this four-story building but also the mountain homes it rents, sells, and builds in its development, Pumpkintown Mountain. The Pumpkintown Mountain Opry, seen here, contains shops and a restaurant, and on Saturday nights offers dinner and a show, described as “Southern Mountain Theater.”

The village of Pumpkintown was settled in the late eighteenth century and is said to have been named by a man traveling through the area who noticed a plethora of colorful pumpkins growing along the Oolenoy River. Pumpkintown remains a fixture in the landscape of the South Carolina mountains.