Allen University in downtown Columbia was founded in 1870 by the Columbia District of the African Methodist Episcopal (AME) Church. The AME denomination was organized in 1816 in Philadelphia by the Reverend Richard Allen. While the AME church grew in the North over the following decades, it was stifled in the South until after the Civil War due to slavery and laws that prevented even free blacks from worshiping without the oversight of whites. Following the war, the Columbia District strongly desired a school to educate former slaves. Led by the Right Reverend John Mifflin Brown, the district agreed to purchase 150 acres in Cokesbury (present-day Hodges) for a school. Despite opposition from white South Carolinians who feared the education of their African-American neighbors, the Payne Institute, named for AME Bishop Daniel Alexander Payne of South Carolina, was operating in Cokesbury by 1871. 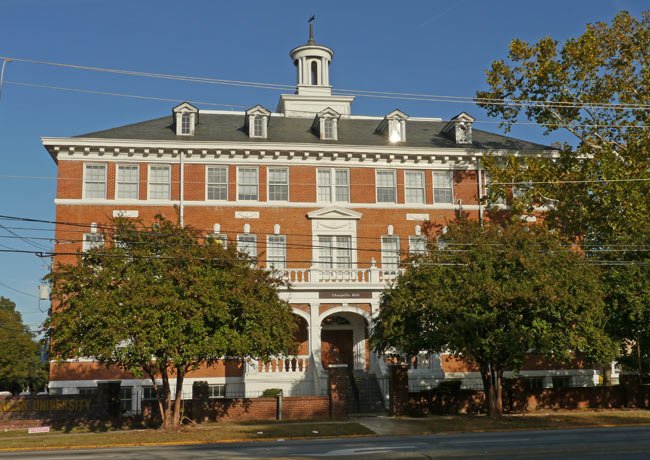 Payne Institute would soon relocate to Columbia at the behest of the Right Reverend William Fisher Dickerson, who envisioned greater growth in the state capital. In 1880 the school moved to its current site and changed its name to Allen University in honor of the Reverend Richard Allen, founder of the AME church. The moved proved to be fruitful, as the school grew exponentially within its first decade in Columbia. Initially, Allen University educated students of all ages, from elementary school through law school and theological school. As the school continued to attract students seeking baccalaureate degrees, Allen University decided to phase out its lower grades. The elementary school closed in the 1920s, and the high school ceased in 1933. Allen University then continued to expand not only its college campus but also its educational offerings, adding academic departments and buildings from the 1940s through 1950. 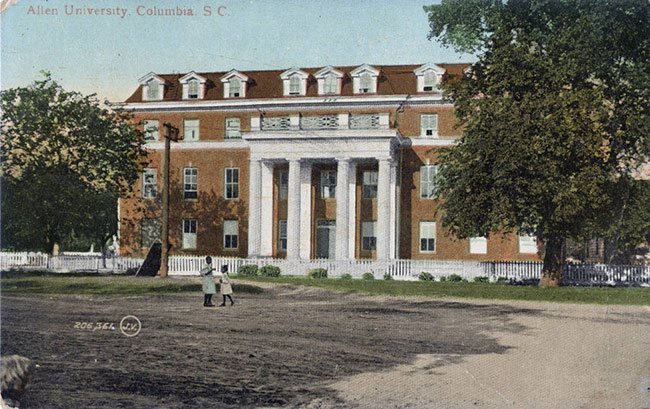 Chappelle Hall, seen above, was completed in 1925. It was designed by African-American architect John Anderson Lankford, who also designed the Old Bethel Ame Church on Sumter Street. Chappelle Hall served as an administration building and assembly hall and was the site of many planning meetings during the Civil Rights movement of the 1960s. Historic figures such as Mary McLeod Bethune, Martin Luther King, Jr., and Muhammad Ali have inspired audiences from its stage. Considered the gem of the campus, Chappelle Hall was restored in the spring of 2016. It continues to be used by the school and now also serves as a state-of-the-art concert hall and venue for local cultural events. 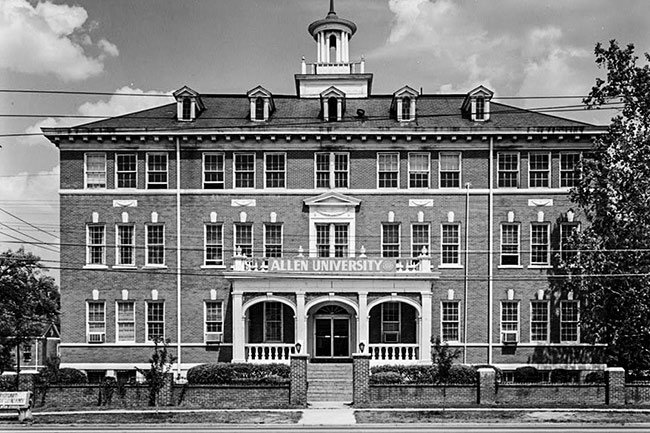 Allen University offers baccalaureate degrees in eight majors with 21 area of concentration. The accredited liberal arts college also has an active campus life, participates in its surrounding community, and continues to be a vibrant facet of the capital city.

Chappelle Hall and other buildings are listed in the National Register as part of the Allen University Historic District:

Among the many private schools and universities for African Americans founded during the post-bellum period, Allen University was probably the first founded and operated by African Americans in South Carolina. Established by the African Methodist Episcopal Church, Allen University was influenced by the denomination’s emphasis on education and a trained clergy. Named for Richard Allen, founder of the A.M.E. Church, Allen University was one of several universities established by the A.M.E. Church in the South following the Civil War. Begun four years after the University of South Carolina was closed to African Americans, Allen helped fill the pressing need for African American education in South Carolina. The university purchased its first property in Columbia in 1881. The first major building was erected and in use on the present site in 1888. The campus historic district contains four major buildings, ranging in date from 1891 to 1941, situated around a campus green. The architecture is typical of many university buildings around the country, characterized by red brick construction, white columns, and classical symmetry and detailing.