This brick edifice in downtown Columbia stands in the historic neighborhood known as Arsenal Hill. The area was the location of the former Arsenal Military Academy, created in 1842 along with The Citadel in Charleston. The military academy was built on the site of a former arsenal, giving the school its name. The only structure remaining from the academy is the Governor’s Mansion, a barracks built for the school in 1855. Arsenal Hill Associate Reformed Presbyterian (ARP) Church was built in Arsenal Hill in 1904. 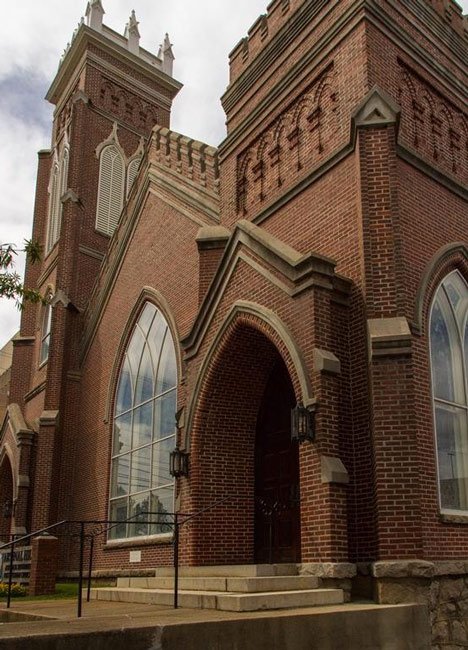 The congregation was formed when members of First Presbyterian Church left to organize the Mission Sabbath School on December 23, 1883. The group initially met at the State Agricultural Society at the old state fair grounds before moving to the private home of Dr. Thomas Kinkead in 1884. In February of 1885 the group purchased a lot on Richland Street and built a chapel. 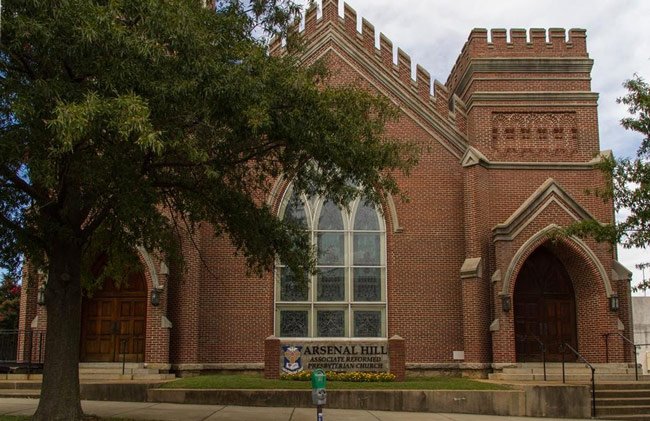 Around that same time, a storm was brewing within the nearby Columbia Theological Seminary over evolution. At the heart of the debate were two professors: Dr. John L. Girardeau, who was opposed to the idea of evolution, and Dr. James Woodrow, who claimed that evolution did not contradict Biblical teachings. When a supporter of Dr. Woodrow’s was called as the new pastor of First Presbyterian Church, a faction of the congregation left and joined Mission Sabbath School. The Misison Sabbath School then formed a new congregation called Second Presbyterian Church. It was chartered in 1886 with Dr. Girardeau as its first pastor. 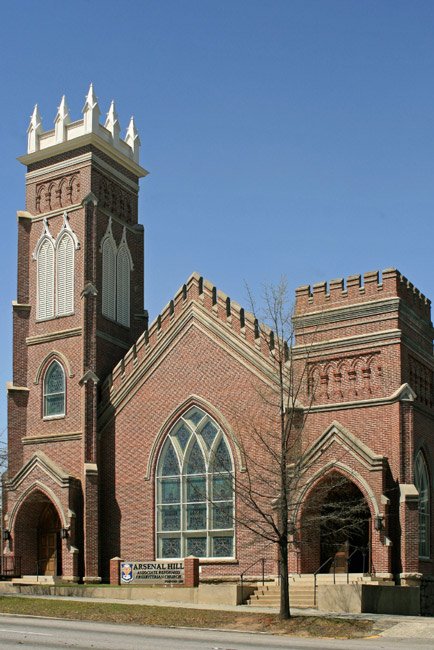 In 1892 members of the church purchased the current lot. The present church was built in 1904 with the aid of Alexander Sutherland, a Scottish stonemason and church member. It was designed by architects James Hagood Sams and Avery Carter. In 1907 the congregation changed its name to Arsenal Hill for the aforementioned neighborhood in which it rests. As for Dr. Woodrow, he was eventually removed from Columbia Theological Seminary, and the Presbyterian Church officially denounced evolution until 1969. Arsenal Hill Presbyterian Church joined the Associate Reformed Presbyterian denomination in 1973.

Interestingly, Dr. James Woodrow was the maternal uncle of President Woodrow Wilson, who lived briefly in Columbia during his youth. Wilson’s father was also a professor at the Columbia Theological Society.

Educated as both a scientist and a seminarian, Dr. Woodrow did not believe evolution contradicted creation since the Bible does not specify how God created the earth’s inhabitants. These convictions led him to be tried for heresy. Though he was exonerated, he was nevertheless dismissed from his job at the seminary, which actually closed for a year during this debate. He later served as the president of the University of South Carolina, and he remained an active minister of the Presbyterian faith until his death in 1907.