The Jim Hamilton–L.B. Owens Airport, informally called Owens Field, was built in 1929 and served as the area’s primary operating terminal until the 1960s. Located in the heart of Columbia‘s historic Rosewood neighborhood, the airport still serves private, business, and military flights. It was originally named the Columbia Municipal Airport and then later changed to Columbia Owens Downtown Airport following World War II for former mayor Lawrence B. Owens, a municipal airport advocate. In 2008 the name was changed again to honor former airport manager Jim Hamilton. 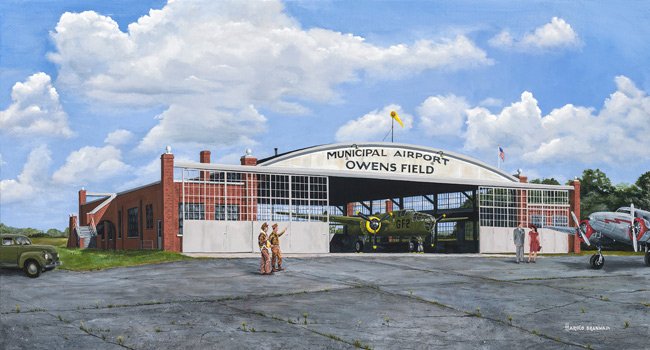 Harold Branham of Blythewood, 2013 © Do Not Use Without Written Consent

Pictured above in an artistic rendering by Blythewood artist Harold Branham, and in a photograph at the bottom of the page, is a fully-restored B-25 bomber outside the famous Curtiss-Wright Hangar. The painting shows the Curtiss-Wright Hangar as it appeared in the 1940s. 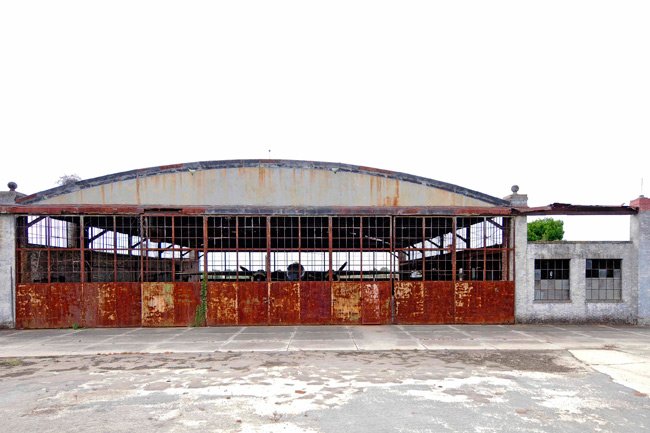 The bomber crashed into Lake Greenwood in 1944 and was removed from the lake and restored in 1983. This hangar was the first constructed at the airport and has welcomed many notable visitors to South Carolina including Amelia Earhart and Franklin D. Roosevelt. 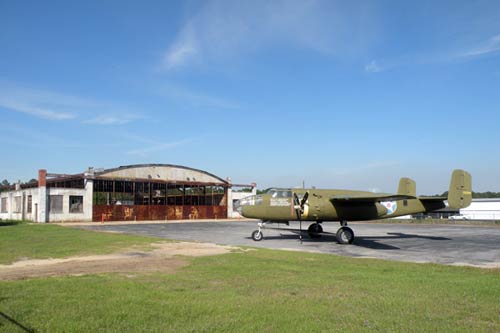 Ann Helms of Spartanburg © Do Not Use Without Written Consent

The Curtiss-Wright Hangar is listed in the National Register:

(Owens Field Municipal Airport Hangar) The Curtis-Wright Hangar, the first building erected at Owens Field in 1929, represents the contributions of air transportation to the city of Columbia and the state of South Carolina. The hangar grew and changed along with the airport and aviation history. It was first used to house airplanes for passenger and airmail services, then became the headquarters of the South Carolina Aeronautics Commission, later was used as space for the civilian flight training program, and finally was used for general aircraft maintenance. During the 1930s, Owens Field had the distinction of hosting many well-known aviators and personalities, including Amelia Earhart and President Franklin Delano Roosevelt. The Curtiss-Wright Hangar is a running bond gray brick structure with a metal-clad barrel roof and is similar in style to other airport hangars built in the twenties. The hangar has a main open storage area for airplanes, which is flanked on either side by flat-roofed wings. The central storage area is about two stories in height, and has a clearance of approximately twenty feet beneath the steel roof girders.

Contributor Ann Helms writes, “This B-25 was flown by student pilot Col. Dan Rossman in June 1944 when it crashed into Lake Greenwood. It was pulled out of the lake in 1983 and restored. It has been on display at the Curtiss-Wright Hangar ever since. The hangar and other B-25’s were used for training by Lt. Col. James Doolittle and his ‘Raiders’ prior to the bombing raid over Japan in early 1942 following Pearl Harbor.”

Artist Harold Branham shares about his vibrant painting, “I was asked to paint a rendering of the old hangar in order to help raise funds to restore it. The project was delayed due to lack of funds. After much research, I was able to compose this painting incorporating the old B-25 Bomber restored from the bottom of Lake Greenwood. I also included a plane like Amelia Earhart flew into the airfield. There are prints available.”