This post-World War II church in Columbia was formally organized on February 1, 1948. As people started families after the war, the city began to grow, and new communities such as Forest Acres developed. New residents began searching for church homes, prompting the formation of new congregations. When it was formed, Eastminster Presbyterian Church was the first Presbyterian church organized in the city in 25 years. Other local new churches such as Trenholm Road Methodist followed suit. 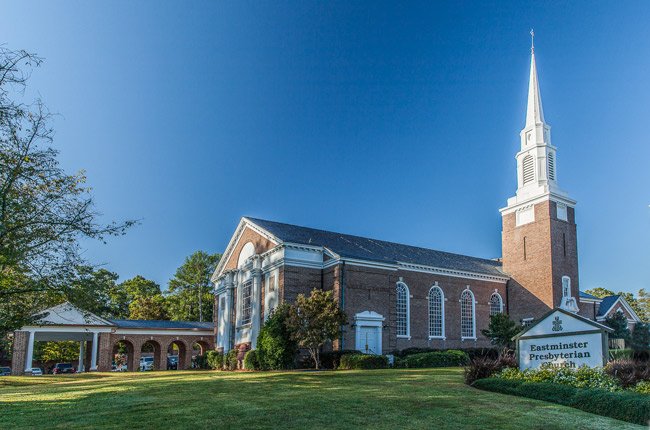 This church originally met in the adjacent Carolina Children’s Home until the congregation was able to purchase property across the street from Harry Davis, who donated one lot of his land to the burgeoning church. By fall of 1948, a building obtained from Fort Jackson and moved to the property was being restored for temporary use when it burned on October 27th. The church quickly built a permanent structure in its place, a small building on the back of the property known as the Brown Building. By 1951 the church had acquired more land, now owning the entire block of Trenholm Road. In 1956 the present-day sanctuary was completed, and the Brown Building continued being used as a Sunday School building and fellowship hall.

Today even more buildings adorn the block as the church continues to grow. A private school, Eastminster Day School, also operates from the church grounds.