The Richland County town of Hopkins is named for the family of John Hopkins, who received a land grant of 250 acres here in 1764. After acquiring his land, Hopkins established Oldfield Plantation, a name issued by slaves because the plantation house – a simple cabin – was built in an “old field.” Hopkins left his property to his sons, and their descendants still own land in the rural community. When the South Carolina Railroad established a line in the area sometime between 1836 and 1842, the town became known as Hopkins Turnout. A post office opened in the town in 1849. 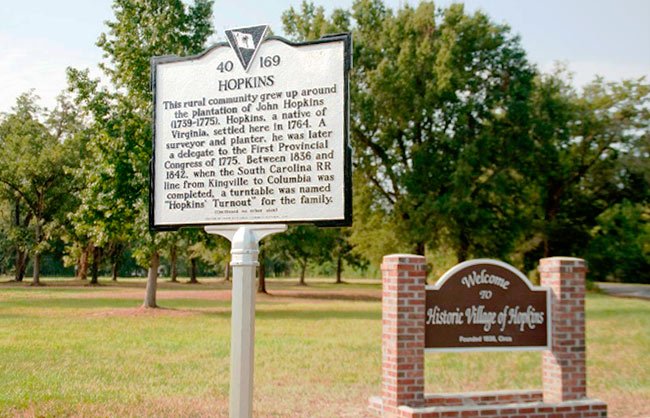 Following the Civil War, many newly-freed slaves and their families bought farmland in Hopkins through the South Carolina Land Commission. The Land Commission was a state government program established in 1868 to finance the redistribution of land to freedmen. Hopkins’ economy suffered terribly in the 1920s as the agricultural market declined, and the town never fully recovered.

Hopkins is likely best known in South Carolina for being the location of the Congaree National Park. The Congaree Swamp National Preserve Association formed in the early 1970s to turn the floodplain into a National Park, allowing it to be preserved, maintained, and enjoyed by the public. The site was not designated a National Park until 2003, though the group was successful in having the area named a National Monument and National Natural Landmark prior to the swamp’s being awarded its current status.