Olympia Mill is located in the historic Olympia Mill Village, just outside downtown Columbia, next to the Congaree River. Granby Mill, completed in 1897, stands next to it. Granby Mill was the first cotton mill in South Carolina to be powered by an off-site source of hydroelectric power. It was designed by innovative mill engineer W.B. Smith Whaley, who also designed and owned Olympia Mill. 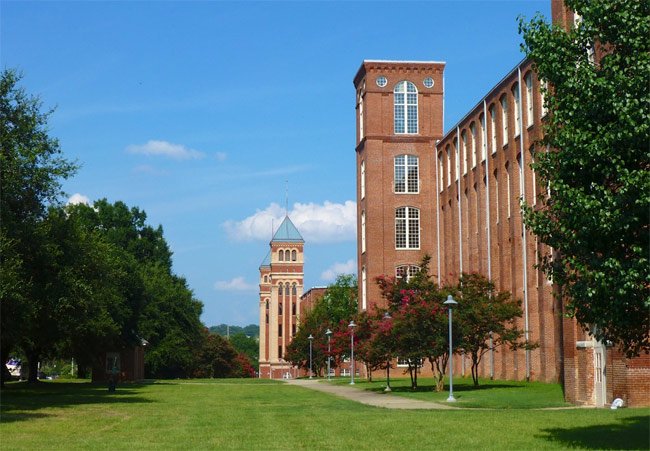 Olympia Mill opened in 1899. At the time, it was the largest cotton mill in the world under one roof. The neighborhood around the two mills (Olympia and Granby) quickly grew as workers were hired to run over 2,000 textile looms. 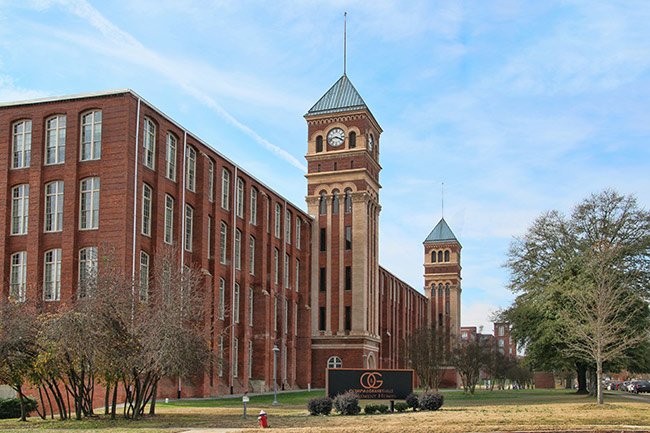 Operating for almost a century, the mills finally closed their doors in 1996. They sat vacant for more than a decade until they were renovated in 2007 to house upscale apartments. 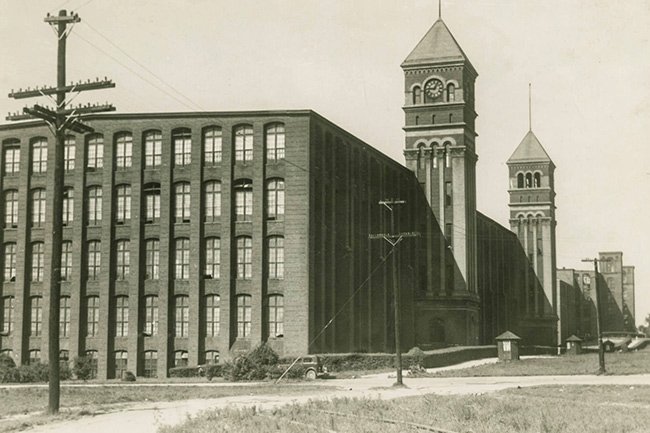 Also designed by W.B. Smith Whaley, the building below was constructed in 1903 and originally served as a store for employees of the mill village. Several additions – including a pool and gymnasium – came after the store was converted into a community center, sometime before 1918. Many residents of the mill village remember the building fondly as a place where socializing took centerfield. Community service organizations met here, and sports events were held here as well. The building, now known as 701 Whaley, has been completely restored and serves as one of Columbia’s most sought-after event rental spaces. 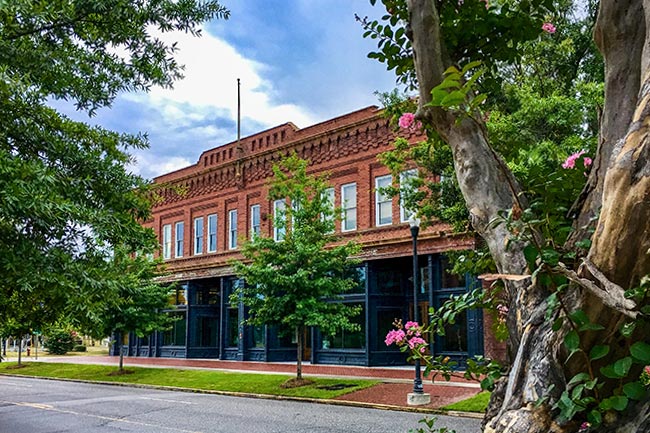 Olymia Mill and Granby Mill are each listed in the National Register, along with their surrounding villages including the Olympia School:

Olympia Mill stands as an intact example of late nineteenth century textile mill architecture. Constructed in 1899, the building is significant architecturally as an important example of the Romanesque Revival style applied to industrial architecture and as the work of important mill designers W.B. Smith Whaley & Company. William Burroughs Smith Whaley designed, owned and operated Olympia Mill, serving as its first president. Olympia was one of four cotton mills the firm designed and constructed in Columbia. The firm’s innovations in mill design contributed to the rise of the textile industry in South Carolina and helped to secure their position as one of the most important textile mill designers in the nation. When Olympia Mill opened in 1899, it was widely recognized as “the largest cotton mill under one roof in the world.” The mill is comprised of a massive four-story, red brick, rectangular shaped, main mill building that is connected to an original one and two-story red brick power plant. Other buildings that are part of the mill complex include: a one-story brick power plant auxiliary building, a one-story storage building, and two small brick one-story gate houses. Surrounding the site is the historically related Granby Mill to the west and the Olympia Mill housing village to the east and south. The main building contains features of the Romanesque Revival style with a red brick exterior embellished with terra cotta detailing, large segmental arched window openings, and twin pyramidal roofed towers that rise above the flat roofline. Listed in the National Register February 2, 2005.

The Granby Mill and adjacent Granby Mill Village were designed, built and managed by the prominent textile mill designer W. B. Smith Whaley whose firm was one of the Southeast’s most prolific and innovative. Granby, initially constructed in 1896-1897, was the second Columbia mill built by Whaley, the first being the Richland Mill built in 1894-1895. Granby represented Whaley’s first major technological improvement in mill design, being the first cotton mill in the state to be powered by a “remote,” off-site source of hydroelectric power. The mill is a large rectangular shaped, flat roofed, Romanesque Revival style four-story brick building having uniform fenestration with buttresses inserted at regular intervals and two projecting five-story entrance towers on the front façade. The Granby Mill Village depicts one of the best preserved turn-of-the-century mill villages found in the state with some 112 of the 121 originally built dwellings remaining with most retaining a high degree of physical integrity. The Granby Mill Village is architecturally noteworthy because its predominant “saltbox” operative dwelling design based on New England antecedents truly reflects Whaley’s training and experience during his formative years in the Northeast. The Granby Village’s physical neatness, cohesive character, and predominant “saltbox” design present a distinctive and striking visual impact characteristic of the translation of the traditional New England mill village design to a late nineteenth century Southern setting. The village presently consists of the main mill building, the mill gatehouse, the ca. 1902 two-story mill office building, commercial buildings, a Gothic Revival church and operatives’ houses. Listed in the National Register September 20, 1993.

The Olympia Mill School is locally significant under Criterion A in the areas of Social History and Education, with a period of significance dating from 1901 to 1909, its tenure as a school. It is significant as the first school established by the Olympia Mill during a rapid period of industrialization in and around the state capital, Columbia. The Olympia Mill School maintains a high degree of historic integrity on the exterior. It is a two-story frame, residential building with a rectangular plan, a lateral gable saltbox roof, and a hip roof front porch, all features that are original to its construction in 1901. Its exterior appearance belies its early history as a school building as it appears identical to other mill housing in the Olympia Village. Enrollment at the Olympia School quickly expanded to the point where the small house became inadequate. A purpose-built school was constructed on a large lot southeast of the original school and it replaced this building in the fall of 1910, after which time the original Olympia School became housing for mill operatives.

Contributor Samantha Keidler tells us: “This is one of my favorite shots of that day. I didn’t even realize the way the sun was hitting it until I got home and uploaded my pictures. It made me think of the clock tower in Back to the Future as soon as I saw it.”

Samantha Keisler of Lexington, 2007 © Do Not Use Without Written Consent