This home in Columbia signifies the rise of the Rutherford family from slavery to freedom. William H. Rutherford was born in 1852 and emancipated at age 13. As a young man during the Reconstruction era, he worked as a servant for a black South Carolina legislator who was later elected to the United States Congress, Robert Brown Elliott. Rutherford became a barber and then a school teacher before finally turning to manufacturing late in life. 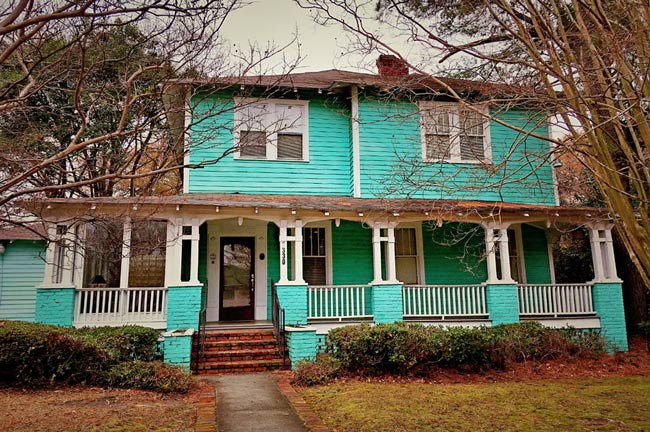 Rutherford made regalia for fraternal lodges and also briefly co-owned a cigar factory with William Frasia. In 1878, he purchased a corner lot on what was then Winn Street and built his home, which is no longer extant. By 1905, he was prosperous enough to buy the neighboring house from Dr. Samuel Fair and convert it into a rental property. That home, a small, one-story house built in or before 1850, became known as the Fair-Rutherford House (seen below). 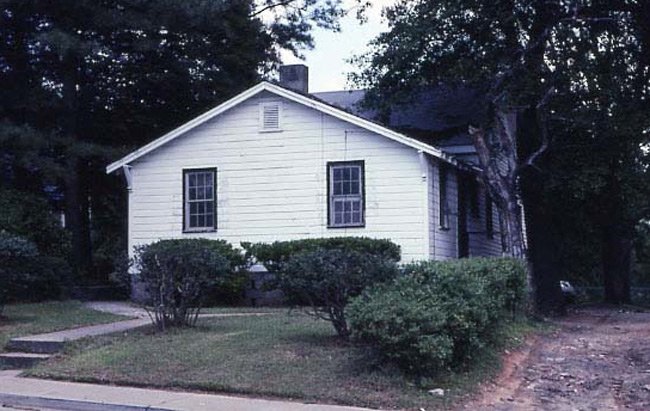 SC Department of Archives and History, 1984

Rutherford then focused on acquiring more rental property around town; owning multiple properties was rare for a black man in South Carolina during the early twentieth century. His son, Harry B. Rutherford, Sr., eventually joined him in business, operating the manufacturing companies and also managing the rental properties. In 1914 Harry Rutherford, Sr. bought a lot on Gregg Street adjacent to the Fair-Rutherford House.

When Harry Rutherford, Sr. died in 1917, his widow, Carrie Rutherford, moved into the Fair-Rutherford House. She replaced the old house with the house seen here between 1924 and 1925 and moved into it upon its completion. She continued to buy and sell property. Later her son, Dr. Harry B. Rutherford, Jr. and his wife, Dr. Evaretta Sims Rutherford, lived in the home. The Rutherfords were both educators who received their doctoral degrees from Harvard University.

Dr. Harry B. Rutherford, Jr. founded the Richland Teachers Council Federal Union to provide loans to African-American teachers, was named principal of Booker T. Washington High School in Columbia during the 1950s, and later worked as an assistant superintendent in Washington, D.C. Dr. Evaretta Rutherford served as the chairman of the Department of Education at Benedict College in Columbia and then became chairman of the Department of Education at Howard University in Washington, D.C. She also authored six books on African studies.

The Rutherford’s son, named Harry Rutherford, II (also known as Harry Rutherford, Jr.), became a dentist and converted this home into his dental office in 1982. Today the dental practice, Palmetto Dental Services, still operates from the historic family home and is run by Dr. Harry Rutherfod, II and his son, Dr. Trace Rutherford.

The Fair-Rutherford House and the Rutherford House are one- and two-story residences, respectively; the former was erected ca. 1850 on land owned by Dr. Samuel Fair and underwent three alterations during the following century (ca. 1879, ca. 1905, and ca. 1950), and the latter was built in 1924-25. Both houses are significant in Columbia black history because of their association with the advancement of the Rutherford family from slavery to prominence and respect. Over the years, both male and female members of this African American family living in these houses have been business owners, professionals and educators, among them, Dr. Evaretta Sims Rutherford, an educator and Fulbright scholar who wrote, co-authored, or edited six books in the field of African studies. William H. Rutherford’s business had prospered sufficiently by 1905 to permit him to acquire the Fair-Rutherford House as a rental property; his son Harry B. Rutherford, Sr. expanded the family’s holdings with the purchase of the 1330 Gregg St. property in 1914. By 1925 the family had built an imposing residence on the 1330 lot adjacent to the Fair-Rutherford House. William H. and Harry B., Sr. operated independent manufacturing businesses when most blacks in the nation were laborers or worked in service-related occupations. Later family members concentrated their attention on the acquisition of real property and other business ventures. Dr. Harry B. Rutherford, Jr. was a prominent Columbia educator, consultant, and credit union official.