This three-story brick building in Spartanburg was first known as Arcadia Mill Number Two. It was built in 1922 by Dr. Henry Arthur Ligon, a local pharmacist and banker who branched out into the textile business with the establishment of Arcadia Mill Number One in 1902. The first mill structure is located a few hundred yards west of this building, and the village of Arcadia developed around the first mill soon after it was built. Arcadia Mills was a successful manufacturing company during the height of the southern textile boom in the early part of the twentieth century. In fact, Ligon proved to be so adept at mill management that he took over operations of a mill in Woodruff as well as Mills Mill in Greenville in the early 1920s. 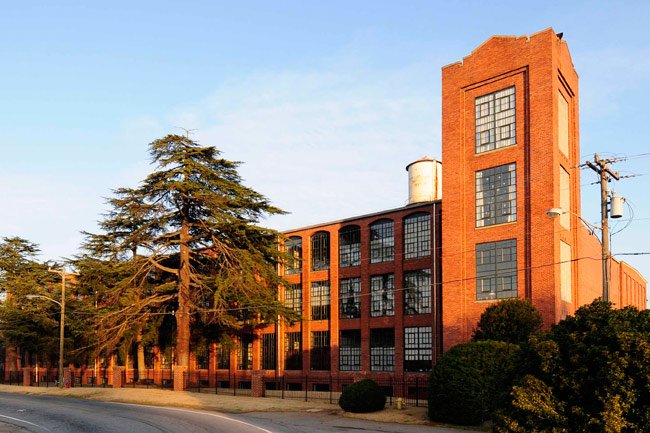 The following decade would prove to be a difficult one for Arcadia Mills, however. The agricultural depression of the 1920s – particularly, the devastation wreaked on cotton crops by the boll weevil – caused a sharp decline in the textile industry. The Great Depression also instigated the failure of many textile mills. Arcadia Mills stayed afloat despite these setbacks and even continued productions through the United Textile Workers of America strike of 1934. Yet the mill was sold later that year to New York cotton businessman Joshua L. Baily. Northern textile mills had recently suffered even greater economic losses than southern mills due to industry regulations that the southern textile mills lacked. Realizing that they could hire cheaper workers, including children, to work longer hours, many Northerners purchased southern textile mills in the 1930s.

Arcadia Mill Number Two is listed in the National Register:

(Mayfair-Baily Mill) Arcadia Mill No. 2 is significant for its association with the development of the textile industry in Spartanburg County from 1923 to 1955 and as an intact example of cotton mill engineering and design at the end of the great boom period in Southern textile mills. This mill was the second of two Arcadia Mills built by Spartanburg pharmacist and banker Dr. Henry Arthur Ligon, Sr. (1856-1925). The first Arcadia Mill opened in 1902. Ligon began construction of Arcadia Mill No. 2 in 1922, which went into operation in 1923. The Arcadia Mills suffered during the first years of the 1930s, both from the wake of the agricultural depression and the Great Depression. The mills also suffered from labor unrest when the company resorted to the “stretch-out,” requiring workers to work longer hours, increase the speed of their work, or increase the output of cloth. A strike organized by the United Textile Workers of America (UTWA) in 1932 failed, and Arcadia workers did not join the UTWA-attempted strike of all American textile mills in 1934. In 1934 the Arcadia Mills were sold to Mayfair Mills, Inc., a new company organized by Joshua L. Baily and Company, a New York cotton agent. Arcadia Mill No. 2 became Baily Mill, sometimes known as Mayfair-Baily Mill. In addition to the three-story main brick mill building, the property also includes a two-story brick warehouse (1923), one-story brick weave mill (1953), reservoir, water tower, and elements of historic landscaping that also contribute to the significance of the property.