This gristmill was once the center of social activity in the Sumter County community of Rembert. Built around 1830 for Garner Sanders, the mill was not operated by a wheel but rather by chutes and a turbine, with Rafting Creek feeding the 90-acre millpond. Water entered the mill through an intake on the north side and powered the turbine before exiting through an outlet on the south side. The south side of the mill can be seen below. The mill was part of Millvale Plantation, which numbered 1,500 acres when it was granted to the Sanders family in the mid-1700s. Today, the surrounding land is still cultivated. 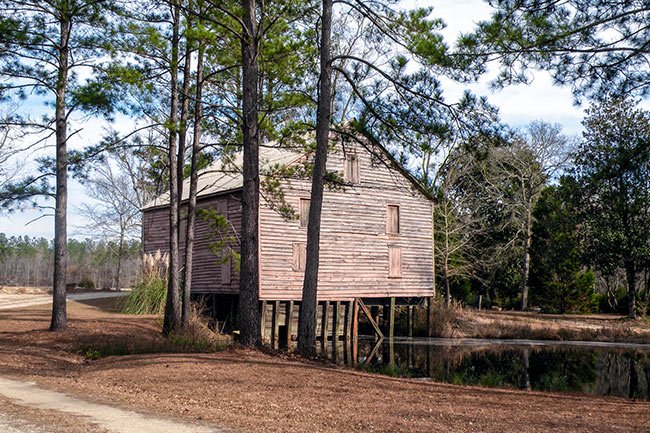 The grits and cornmeal ground at the mill – which was operated by slaves prior to Emancipation – were sold at a nearby store on Sanders’ property. It was here where locals gathered for conversation and political debate. The estate was acquired by William Crawford Sanders (W.C.S.) Ellerbe, Garner Sanders’ nephew, in 1860. Ellerbe added several buildings to the property, including the 1890 Victorian home that sits near the mill on the site that was once occupied by the house of the plantation overseer. Ellerbe also updated the mill with modern equipment in 1880. The mill and surrounding area carry the Ellerbe name, as he contributed to the development of the property and also was a legend unto himself. 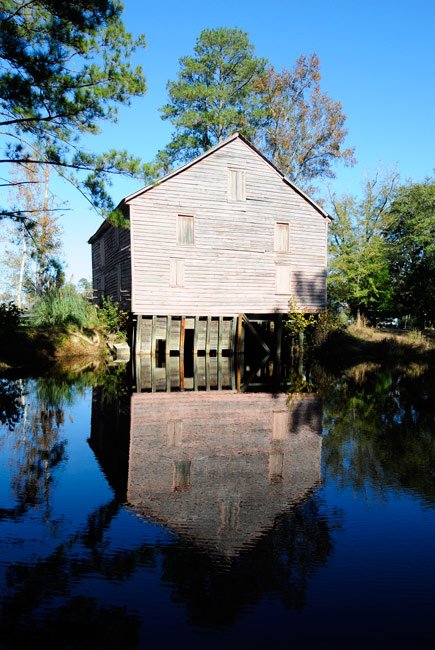 A local story claims that during the Civil War when Ellerbe was fighting for the Confederacy, Union soldiers led by General Potter raided his property in 1865 with the intention of burning it. Before the troops could act, however, a slave greeted them wearing Ellerbe’s Masonic apron. General Potter was also a Mason and thus decided to spare the property.

The mill and its property stayed in the family throughout the twentieth century, continuing to grind cornmeal, which was sold under the name of Brown and Garrison in the 1950s. Despite the updates to the mill over time, the rough-hewn pine clapboard exterior and interior beams and flooring are original.

Ellerbe’s Mill is listed in the National Register:

(Millvale) Built around 1830 by Garner Sanders, Ellerbe’s Mill is a two-and-one-half-story pine clapboard building mounted on wooden pilings situated on a 90-acre millpond. The grist mill, in operation since before the Civil War, is a functioning example of an essential nineteenth century industrial process. Its water power is derived from internal chutes and a turbine rather than a wheel. Modern equipment has been added to the grist mill – working parts were replaced in 1880 and the interior was remodeled in 1928. The building was once a center for social and political interaction in rural Sumter County. Ellerbe’s Mill and the nearby store (originally built before the Civil War but replaced in 1910) once formed the chief commercial center for a 10-mile square area. In addition to the mill and store, structures on the property include a ca.1890 house, several tenant houses, and a dovecote. The two-story white clapboard house was built by W.C.S. Ellerbe, nephew of Sanders, and features a first floor veranda with square columns and gingerbread scroll saw-work and a second floor partially screened porch with a Victorian vine-bracketed balustrade.

Judge Rembert is the granddaughter of Edward English Rembert, who was responsible for the development of the community of Rembert around Ellerbe’s Mill. She wrote to us, sharing some of her memories of the mill, along with the surrounding area and the people who lived there.

“My Grandfather, Edward English Rembert, took part of his plantation and cut it into lots. Sold the lots to people and all the roads were dirt. He just cut dirt roads and sold the lots. He called it Rembert, SC. He owned all the way from his house to 521. After he died, his children sold some of those lots. My father sold the two next to our house after I was old enough to remember.” 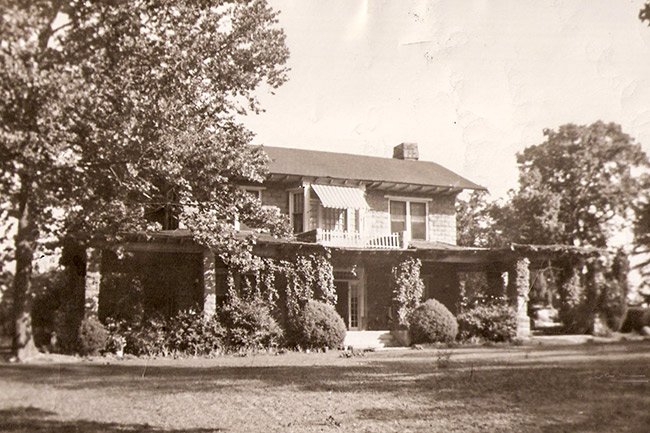 Plantation home of Edward English Rembert.
(Contributed by Judge Rembert © Do Not Use Without Written Consent)

People did not take pictures like they do today. I have no pictures, but we went there often. Lots a the local people took advantage of the water for fun and picnics. Country people did not have lots a choices in the late 40s early 50s.

There was a man who owned a general store in Rembert. His name was Bill Shuler. The story was that Bill would go to the mill pond, float on the water, and read a book. He would fall asleep and remain floating while he slept. Shulers’s store got robbed so many times he started sleeping in the storage room. I never met him or his wife or kids. 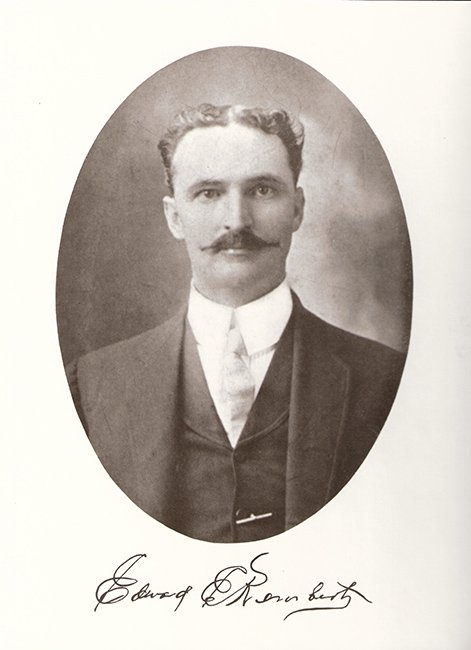 Portrait of Edward English Rembert.
(Contributed by Judge Rembert © Do Not Use Without Written Consent)

The was a story about the Ellerbes. There was a big pretty house there. The Ellerbes had a grandchild they adored. One Sunday after a big Sunday dinner, the family was sitting on the porch watching the grandchild play in the yard. They had a big concrete bird bath. The child pulled the bird bath over onto its chest. It killed the child instantly. My parents said the family never recovered. I heard my parents talk of this often when we were there.

My father started a gas station on the corner of Lee St and 521 — It was a disaster. He later sold the building and land to Lil and Fred Kaminer. It became “Lilfred’s”. It was a huge success. Fred was a Sargent at Shaw. The restaurant is still a huge success. John was the maître d’, Lil died years later. Fred remarried and sold the restaurant to John and moved to Orlando, Florida. I saw Fred in Florida in about 1965. The restaurant has changed hands several times, but now I understand it is operated and owned by people who really know how to cook. It is a success again.

When my parents married in 1941, my father owned a pigeon farm. Someone burned it down but it filled Rembert with pigeons forever. He sold pigeons to fancy restaurants all over the country.

When I was a little girl, Dr. Moore ran the little wooden Post Office. His office was in the back of the little building. He had a son named Tommy who was special needs child. Dr. Moore and his wife moved to Rembert to have a better place for this son to grow up. I understand when his parents died, he was put in a nursing home.  He was a wonderful friends to all who know him.  It made Rembert have a wonderful doctor. Dr. Moore was a great doctor. (Editor’s note: Ginger Moore, whose husband’s grandfather was Dr. Moore, states that this son was actually named Richard Manning Moore. We thank her for her correction!) 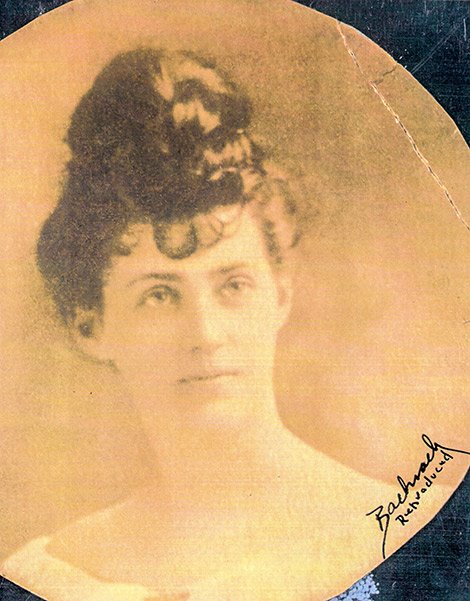 Portrait of Christine Sanders Rembert, wife of Edward English Rembert.
(Contributed by Judge Rembert © Do Not Use Without Written Consent)

You have to remember that before better highways were built, people going from North to South and back came right down 521; there was lots a traffic with people going to Colunbia, people going back and forth to the SC beach. Yankees going to Florida for the winter, etc.

I remember another name, Tommy Wilson. His father had a car repair shop. He played many hours at my house. Gilbert Brown’s father owned Brown’s gas station and repaired cars. Gilbert was a little older than me. He had a big brother but I did not know him. No adult people ever came to our house, I do not know why. Mrs Bradley’s husband was the magistrate and when he died, they made her the magistrate.

In the fall the farmers turned animals out to graze. Well a big hog came in our yard and chased me. I climbed a big gate and the hog ran off. My mother saw what happened so she went to Mrs Bradley’s and borrowed a shotgun. Next time the hog came in our yard, Mama shot it — it ran off. Days later Mama was at the post office, Mrs. Rhymes was telling a lady, “Mr. Rhymes found his prize winning hog dead in a field. He did not know what happened.” My mother said, “Well you can tell him I shot it. It was in my yard and it chased Judge. I will shoot any animal that comes in my yard.” After that we did not have animals running in our yard.