This opulent Neoclassical home in Sumter was originally built in an Italiante style for Major John Haynsworth around 1840. It was purchased by merchant William Bogin around 1860. Bogin died in 1887, and Neill O’Donnell, an employee of Bogin’s as well as his son-in-law, took over his business following his death. The O’Donnells also inherited Bogin’s home and moved it to its current location sometime around the turn of the twentieth century. They then remodeled it with the current facade in 1905. Renowned architect Frank Pierce Milburn, best known in South Carolina for his work in designing Holland Hall on the campus of Newberry College as well as the statehouse dome, designed the project. 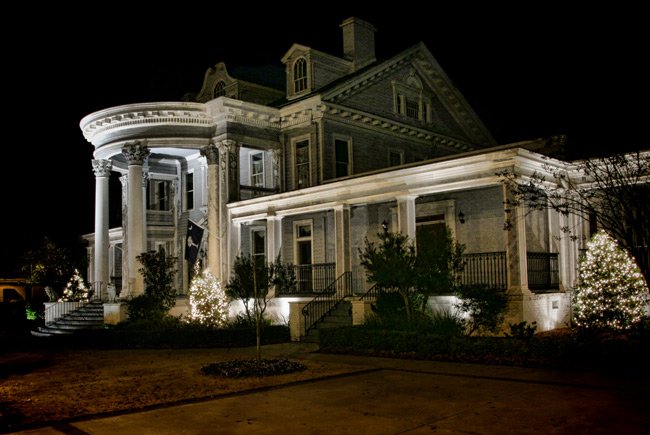 Modifications that altered the style of the house include the addition of a third story with a gable-end roof, Palladian windows in each gable, and the massive curved portico with Corinthian columns. The O’Donnells, who had no heirs, willed the home to the Sisters of Our Lady of Mercy in the 1930s. The Sisters ran a school and orphanage from the home before selling the property in 1961. At that point, the house was converted into a funeral home, requiring further alterations to the property, including the addition of a chapel and an office. The funeral home operated until 1988, when the house was sold to the Bi-Lo grocery store corporation. Bi-Lo wanted to raze the house and build a store on the property; however, a group of citizens instead purchased it for use as a senior center. Later the senior center moved and the house was temporarily used as a library while the Sumter County library was being renovated. It then became an antique store before being purchased once again in 2009 as an event venue.

The O’Donnell House is listed in the National Register:

The O’Donnell House is significant as an outstanding example of the Neo-Classical style designed by a nationally known architect, Frank Pierce Milburn. Although the frame house was built ca. 1840 in the Italianate style, its was remodeled in the Neo-Classical style by Milburn in 1905. The five-ranked, three-story façade is dominated by an imposing, semi-circular, full height porch, supported by four Corinthian columns, which is topped by a substantial cornice ornamented with dentils and a parapet of square posts and a turned balustrade. Milburn added a gable-end roof, which created a third story, with elaborately detailed cornices and Palladian windows in each gable end. The house had descended through the Haynsworth, DeLorme, Bogin, and O’Donnell families of Sumter. Neill O’Donnell hired Milburn to transform his house into a Neo-Classical showcase. O’Donnell was a successful Sumter businessman and banker during a period of rapid growth and prosperity in Sumter from the 1870s through the turn of the century. His home was a reflection of his status in the business and social circles of Sumter. The O’Donnell House is one of the few remaining examples of this style of architecture in Sumter, and is an important example of Milburn’s work as a nationally known architect.