Though a Jewish community had been established in Sumter as early as 1815, the congregation of Temple Sinai was not founded until the end of the nineteenth century. Several Jewish families from Charleston had moved to Sumter in the early 1800s to form an inland community. Other families who emigrated from Europe, fleeing persecution in their home countries, soon joined them. Following the Civil War, the group was able to purchase enough land to establish a Jewish cemetery. 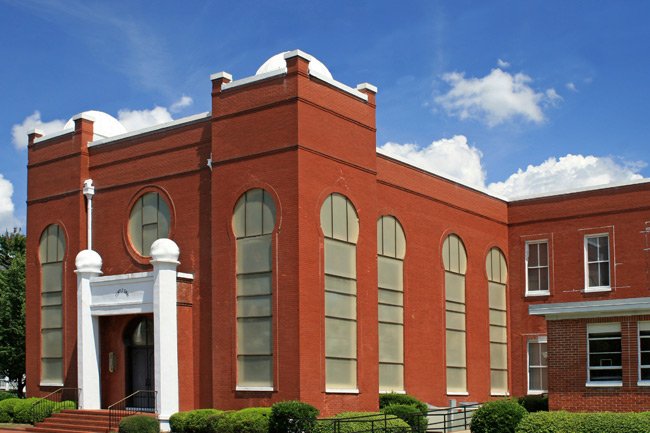 In 1874 the group created the Hebrew Cemetery Society, and a few years later, in 1881, the Sumter Hebrew Benevolent Society was formed. In 1885 the two groups merged into the single organization, the Sumter Society of Israelites. The forming of the society marks the birth of the Jewish congregation; the organization is the formal name of the Temple Sinai. The temple soon started a Sunday school, engaged in mission work, and continued to maintain the cemetery. During its first years the congregation was led alternately by Rabbi E.S. Levy from Augusta, Georgia and Rabbi David Levy from Charleston. 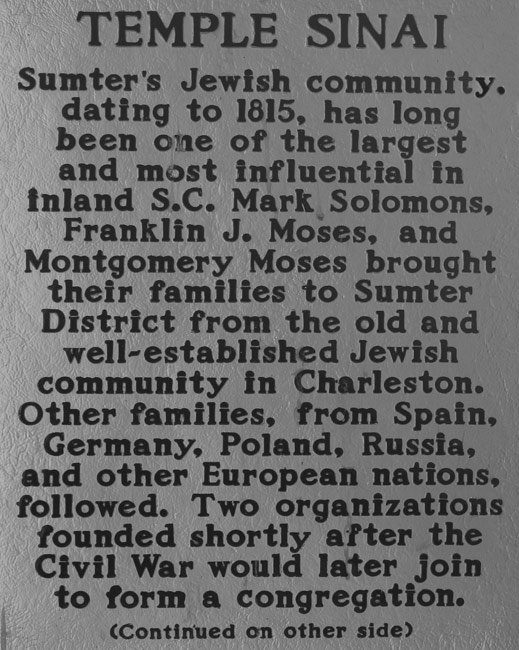 A frame building for the synagogue was erected at the turn of the twentieth century. Around the same time, in 1904, the congregation received its first permanent rabbi, Jacob Klein. The first building burned, and in 1913 it was replaced by the current brick Moorish Revival temple. The edifice was remodeled and rededicated in 1969. 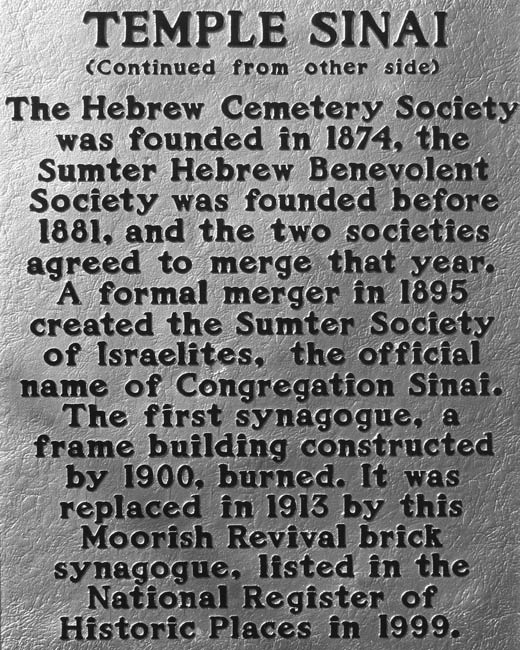 Notable features of the Temple Sinai sanctuary include its domed ceiling and 11 stained-glass windows. Ten of the windows measure 20 feet in height, while another is positioned high over an entrance wall. Each window depicts a scene from the Old Testament. Additions to the building and its grounds were completed in 1932 and 1956, respectively. The 1932 rear addition, called the Barnett Memorial Addition, was built in keeping with the synagogue’s style, including the installation of complementary stained glass windows. The 1956 Hyman Brody Building is used for classrooms and offices.

Temple Sinai is listed in the National Register:

Temple Sinai is a significant example of a sanctuary designed in the Moorish Revival style. It is also a visible symbol and tangible reminder of the substantial and influential Jewish community in Sumter from the early nineteenth century to the present. As the center of that community, its impact and influence were widespread. Outside the coastal cities of Charleston and Georgetown, where there were well-established and significant Jewish populations dating to colonial days, Sumter’s Jewish community was one of inland South Carolina’s largest. Congregation Sinai grew out of the formation of several societies in Sumter in the mid-nineteenth century. By 1895, the Sumter Hebrew Benevolent Society and the Sumter Society of Israelites merged under the name of the Sumter Society of Israelites. Between 1895 and 1904, the society purchased a lot on the corner of Church Street and West Hampton Avenue as the site for a synagogue. By 1906, the congregation had constructed a wood-frame building. The second, and present, brick sanctuary was built ca. 1910-17.