Built in 1823, the Williamsburg County Courthouse is located on West Main Street in downtown Kingstree. It was designed by Robert Mills. Before the courthouse was built, the land where it now sits served as a parade ground. The local militia would muster here during the Revolutionary War. 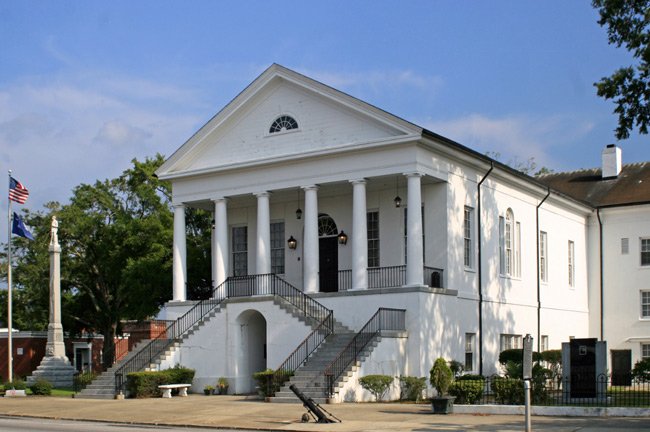 The old courthouse has weathered extensive damage over the years, including a second-floor fire in 1883. Soon after, in 1901, it was enlarged. From 1953 to 1954 the courthouse’s interior and exterior were substantially remodeled, but the building still reflects much of Mills’ original vision, despite these structural changes. 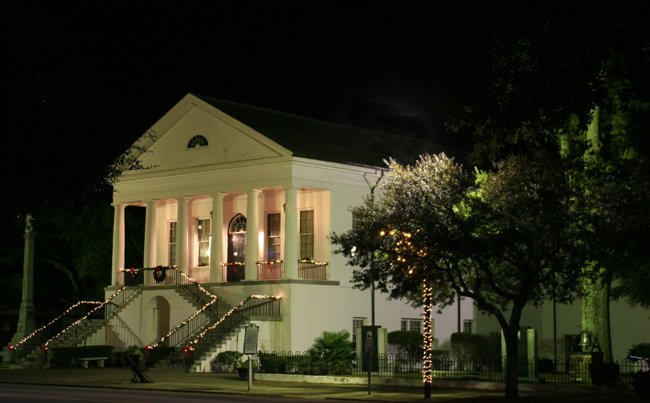 The cannon seen below is a permanent fixture on the west site of the courthouse grounds. However, in the early twentieth century it was mounted on wooden wheels and able to be moved. 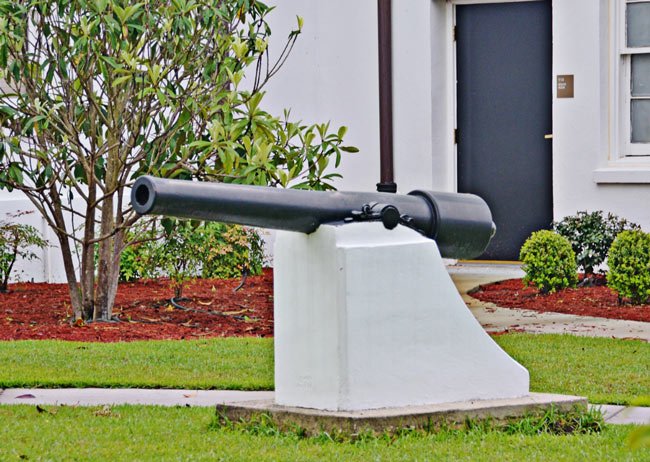 Linda Brown shares, “The Williamsburg Historical Museum has a large, framed photo of Captain Conrad Constine, Civil War veteran and riverboat captain, firing the cannon, which he did for many years as part of the May 10 Memorial Day observance.”

The Confederate monument that stands over courthouse square is affectionally known to locals as the “Confederate Yankee.” The monument, commissioned by the local chapter of the United Daughters of the Confederacy, was dedicated on May 10, 1910 at the intersection of Main and Academy Streets. It was relocated to the courthouse grounds in 1958. 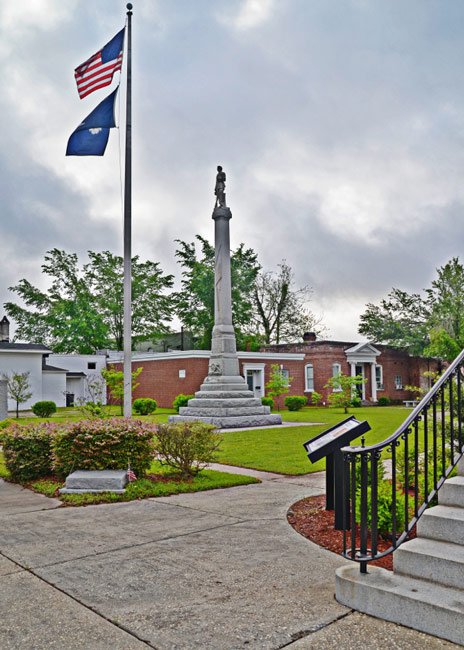 The statue itself was absent from its own dedication, as it was late arriving from its sculptor in Italy. The base was dedicated, however, and when the statue eventually arrived, people were stunned to see that the private depicted in stone was actually a Union soldier. According to Linda Brown, a 1952 news article recounting the unveiling of the statue claims, “One veteran, when he saw the Yankee statue, threw up both hands and yelled, ‘Grant, I surrender!’ before he pitched forward on his face.” 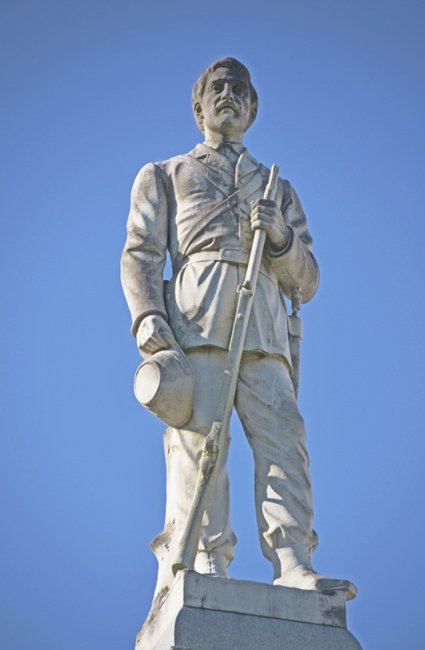 Theories still abound regarding why a Federal soldier was delivered for the Confederate monument. Many speculate that the order was mixed up with another order from York, Maine, which received a Confederate soldier. 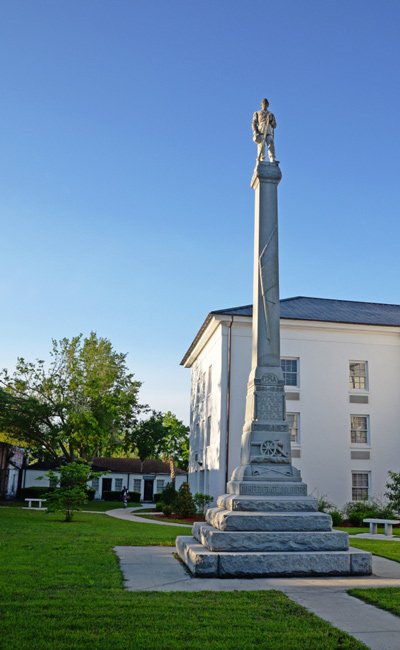 However, Brown also shares, “In the May 5, 1910, issue of The County Record, there is a ‘cut’ of the proposed shaft and statue. That cut shows exactly what is on the Courthouse Square today. The cutline, however, says, ‘The above cut is a fair representation of the monument to the Williamsburg soldiers of the Confederacy to be unveiled here next Tuesday, except that the figure will be replaced by the statue of a Confederate soldier in the uniform of a private…'” Therefore, it seems highly probable that the cut was not changed, and that is to blame for the landmark that appears in Roger Manley’s book, Weird Carolinas.

Many thanks to Linda Brown for the above photos and information on this unusual Confederate monument!

On Mother’s Day of 1966 Dr. Martin Luther King, Jr. gave a speech at Tomlinson High School in Kingstree advocating the power of voting. Referred to as the “March on the Ballot Box” speech, King said:

“Let us march on ballot boxes … so men and women will no longer walk the streets in search for jobs that do not exist. …

“Let us march on ballot boxes until every valley shall be exalted, till every mountain and hill shall be made low, until the rough places are made plain and the crooked places straight and the glory of the Lord shall be revealed. … 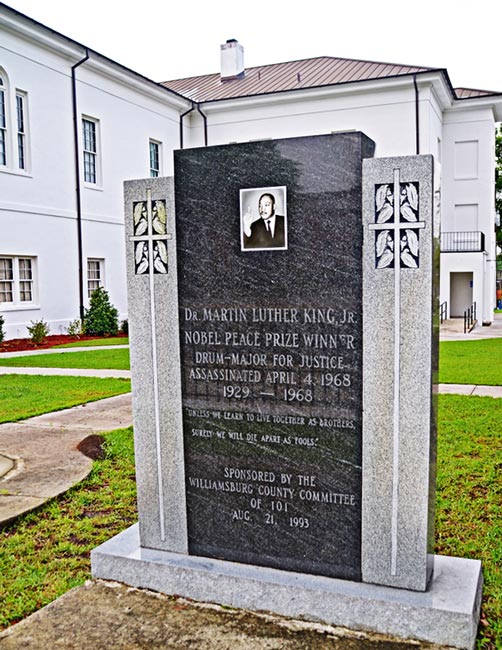 On August 21, 1993 this memorial to Dr. King was erected on the grounds of the courthouse, commemorating the Civil Rights leader and his riveting 1966 speech. Members of the King family attended the dedication ceremony.

Another memorial on the courthouse grounds is dedicated to Justice Thurgood Marshall, the first African American to be appointed to the United States Supreme Court. Prior to serving on the Supreme Court, Marshall was an attorney for the NAACP and argued for the desegregation of education in the 1951 case, Briggs versus Elliott. The case was filed in neighboring Clarendon County, where the genesis of the case were set forth in Liberty Hill AME Church. 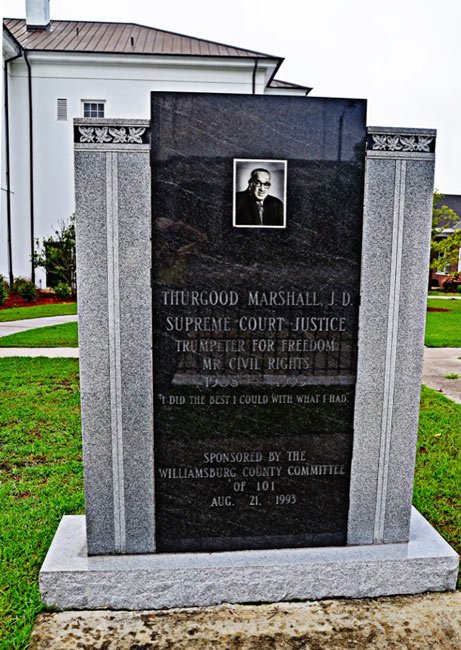 Though he lost that case, it was appealed and became part of 1954’s landmark Brown versus the Board of Education, which Marshall also argued. His victory in the watershed case succeeded in desegregating schools across the United States. Marshall was sworn in as a United States Supreme Court justice on October 2, 1967. On August 21, 1993 – eight months after his death – this monument was unveiled in Kingstree to honor Marshall. Marshall family members were in attendance.

The Williamsburg County Courthouse is listed in the National Register as part of the Kingstree Historic District, which says the following:

The Kingstree Historic District contains forty-eight properties situated along Main Street, Academy Street, and Hampton Street in the commercial area of downtown Kingstree. The district includes the courthouse, public library, railroad station, and numerous commercial buildings. The district is a fine collection of nineteenth-century vernacular commercial architecture. Details such as arched doorways and windows, cast-iron columns and pilasters, decorative or corbelled brick work and pressed tin interior ceilings are present on most of the district’s buildings.

The Williamsburg County Courthouse, built ca. 1823, and designed by Robert Mills, is a fine example of Roman Neo-Classical design with its raised first floor, pediment with lunette, and Doric columns. In 1953-54 the courthouse underwent substantial remodeling on the exterior and interior, though it still reflects much of Mill’s original design. With the exception of the courthouse, most of the buildings in the district were built between 1900 and 1920 when Kingstree enjoyed prosperity as a retail and tobacco marketing center of Williamsburg County. The majority of the buildings in the district are a visible record of this twenty-year growth and the historic fabric of the area remains substantially intact.

Reflections on the Williamsburg County Courthouse

Contributor Linda Brown, who shared many of the photos and much of the information on this page, tells a story about the cannon seen above as relayed by resident Bessie Swann Britton (1894-1978): “Her (Bessie) husband, John Britton, was a small boy in the early 1900s. His father was clerk of court, and John and the sons of several other elected officials often played on the courthouse grounds after school and on Saturdays. One year as Christmas approached, the boys thought that it would be a ‘blast’ (pun most definitely intended) to shoot off the cannon on Christmas Eve. They scavenged some gunpowder and old brick from their fathers’ toolsheds and made their plans.

To quote Miss Bessie: The cannon went off with such a roar that people as far distant as Salters thought the Yankees had launched a new attack. A few nervous Nellies took the woods, but able-bodied men from every direction, grabbed their guns, jumped on their horses and galloped to Kingstree, ready to fight again.

No serious damage was done, but the boys probably enjoyed Christmas a little less that year because of the punishment meted out by their fathers.