Located in downtown Aiken, the Aiken County Historical Museum features a wide variety of collections relating to the history of Aiken County, from its earliest settlers to today. The museum’s collection is housed in Banksia, a 1931 winter colony mansion. Banksia is named for the Banksia rose and has served the community in several capacities over the years, including as a boarding house, a college, a county library, and a museum. 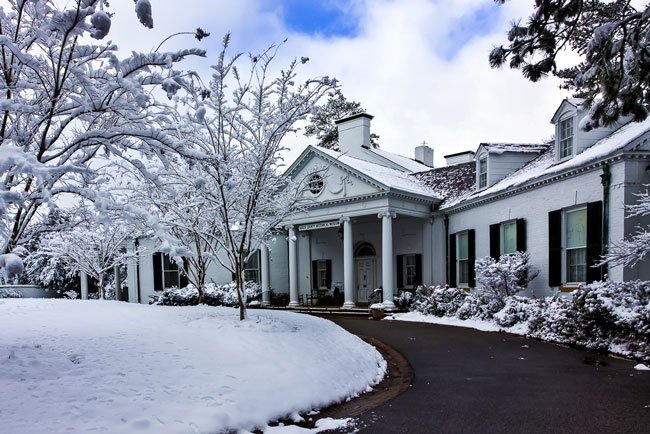 Banksia is the former winter retreat of New York businessman Richard Howe. The home is actually two connected dwellings: the original wooden frame home was built in 1840, and the newer brick home was built in 1931 by Howe. Howe’s initials can be found above the doorway. The home boasts 32 rooms, 15 bathrooms, and a ballroom and measures 17,500 square feet.

Banksia was sold for $40,000 in 1951 by Howe’s daughter-in-law during the construction of the Savannah River Site. The expansive home was then used as a boarding house for workers building the Savannah River nuclear plant during the early-to-mid 1950s. In 1957 it became the home of Southern Methodist College, which relocated to Orangeburg in 1961. The mansion subsequently housed the University of South Carolina Aiken from that year until the college moved to its current campus in 1972. 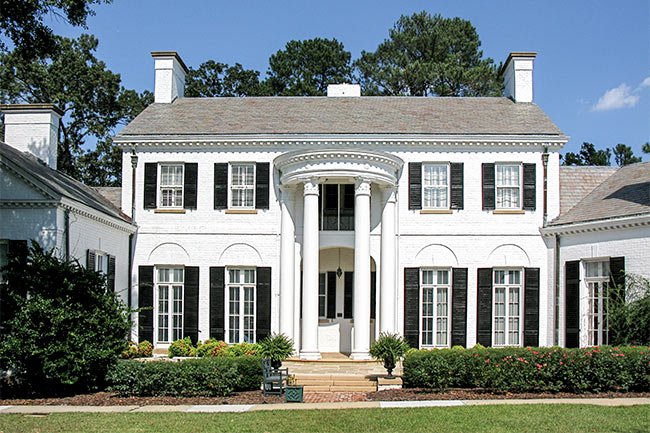 The Aiken County Museum was founded in 1970 by the Aiken County Historical Commission and was established in the old jail that sat behind the courthouse. Meanwhile, the county library had taken up quarters within Banksia following the exit of USC Aiken. In 1984 the museum moved into the older part of Banksia, while the library occupied the other parts of the home. When the library relocated to its present site in the Aiken Institute building in 1990, the museum eventually moved into the rest of the house. 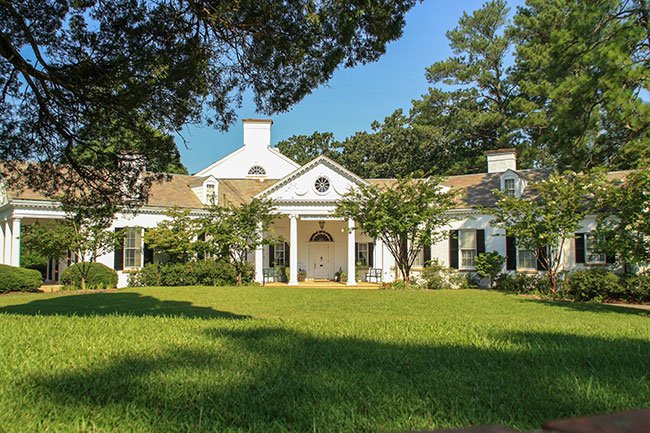 Michael Terry of Columbia, 2008 © Do Not Use Without Written Consent

Also standing on the Banksia property, which covers three-and-a-half acres, are the Ergle Log House and the China Springs Schoolhouse. The Ergle house was built in 1808 and is one of the oldest buildings still standing in Aiken County. The China Springs Schoolhouse was constructed in 1890 and now stands next to the Ergle house. The Aiken County Historical Museum is open to the public Tuesday through Sunday, and admission is free. 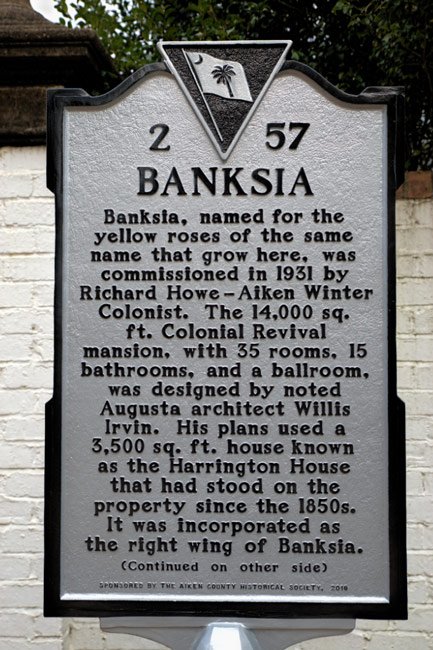 On February 28, 2016 the Aiken County Historical Society unveiled a historical marker honoring Banksia. The history of the stately home is outlined on both front and back of the marker, pictured in the photos above and below. 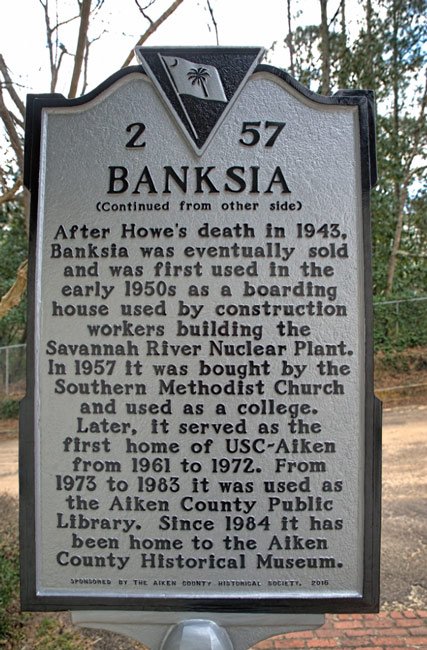 This wavy wall, also known as a serpentine wall, surrounds the grounds of the Banksia Mansion. Though Thomas Jefferson is credited for introducing this design to America with his work at the University of Virginia, these walls have much older roots in Europe. Though it appears expensive, these walls were actually a great way of constructing a brick wall cost-effectively since the serpentine sections of the walls, in place of columns, added strength to the overall structure. 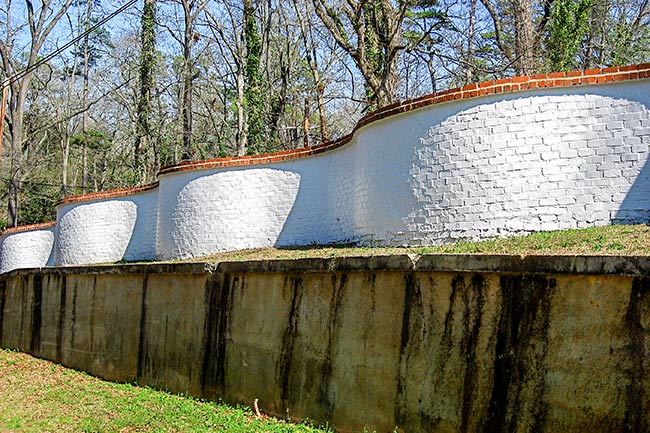 The China Springs Schoolhouse, seen below, was originally located in the neighboring China Springs community and was moved to the museum site in 1984. Visitors can go inside the building and imagine a school day during the late nineteenth century. Standing next to the schoolhouse is the historic Ergle cabin. 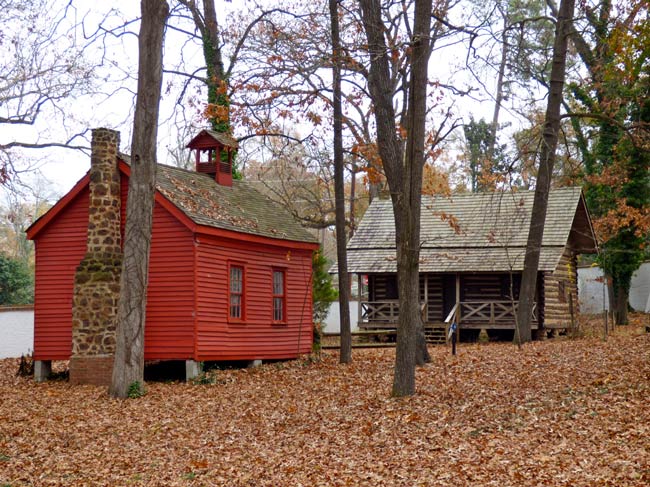 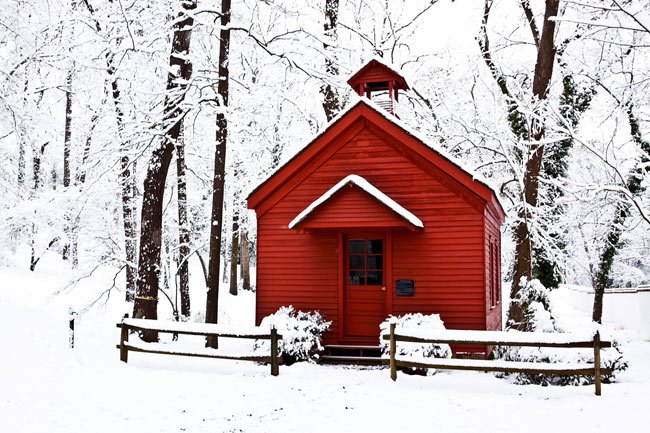 Other Displays at the Aiken County Historical Museum

One of the most important displays at the Aiken County Historical Museum is called “I Don’t Live Here Anymore.” It is a tribute to the people whose homes were destroyed in order for the Savannah River Site to be built. We do not have any photos of the display at this time, but if you can add one, please send it here. 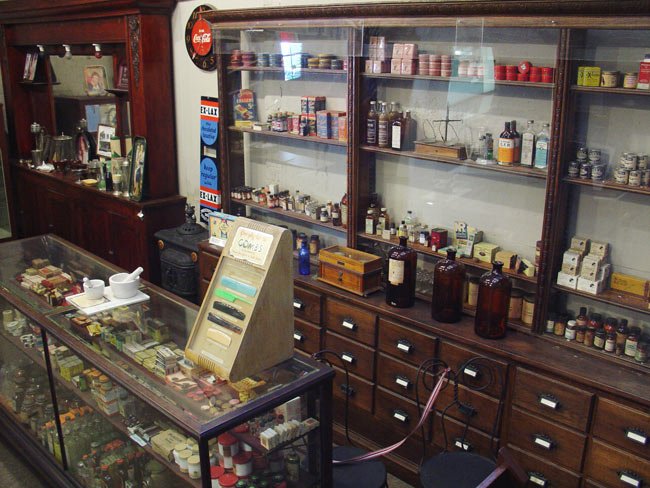 This exhibit in the Aiken County Historical Museum shows a replica of Moody’s Drugstore, which was once operated by Henry Moody in adjacent Barnwell County. The sign on the exhibit tells the story of how this 1950s drugstore was almost entirely resurrected: “In 1952, the town [of Dunbarton] and surrounding area was bought by the federal government to develop the site for the Savannah River Plant. Rather than try to sell the store, Mr. Moody dismantled it, packed up the contents, and stored them in a barn on his farm. The fixtures and the merchandise stayed in the barn for 32 years until in 1984 the collection was donated to the Museum, giving a unique glimpse into life in a small southern town in the 1950s.” 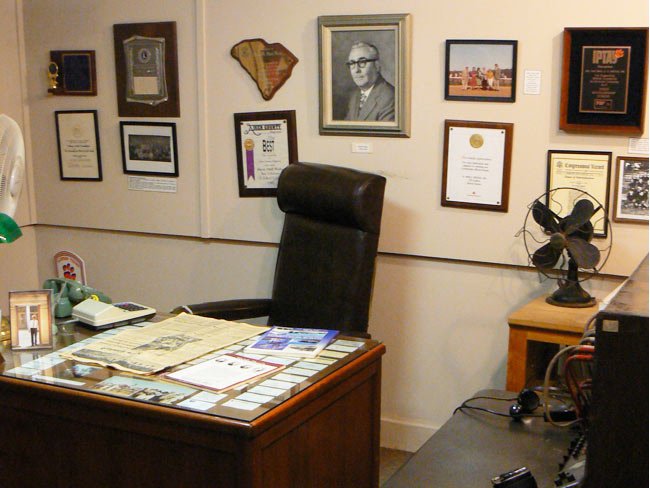 H. Odell Weeks was the mayor of Aiken for 40 years. He retired in 1991, and passed away the next year. The Aiken County Historical Museum now houses this exhibit, a replica of his old office, complete with photographs, official recognitions, and memorabilia from his alma mater, Clemson University. The town’s Activities Center was named in his honor.

Banksia is listed in the National Register as part of the Aiken Winter Colony Historic District II:

Aiken Winter Colony Historic District II is significant as an intact collection of properties associated with the Aiken Winter Colony. The district includes properties constructed by winter residents and properties rented by winter residents. Also included is Willcox’s, an inn frequented by Winter Colonists and noted for its cuisine. The district consists of approximately one hundred properties constructed between ca. 1880 and ca. 1930, including residences, outbuildings, stables, racquet sport facilities, and an inn. The residences range from one-story cottages to large mansions with stables and other dependencies. Twenty-two of the properties are not associated with the Winter Colony theme but are similar in size and scale to many of the more modest properties and contribute to the visual qualities of the district. Many of the streets in the district are divided by grassy medians planted with trees and shrubs. Primary architectural stylistic influences include the Colonial Revival, Classical Revival, Victorian, Tudor Revival, and Queen Anne.