The palmetto tree is perhaps the most recognized and beloved symbol of our state. That said, many South Carolinians would be surprised to learn that botanists do not consider it a true tree because it lacks a solid wood trunk. However, the flexibility of its trunk, together with its strong root system, enable the palmetto to withstand the fierce winds that so often strike our coastline. 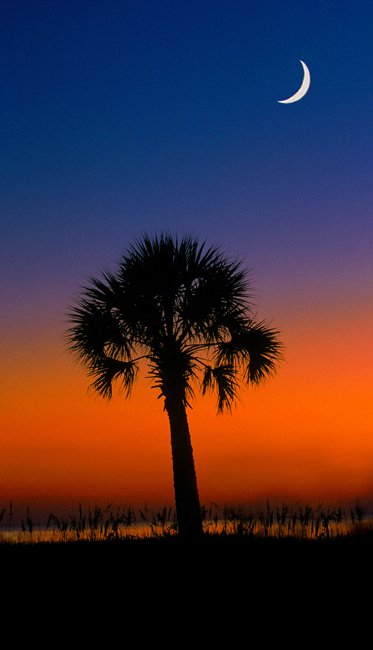 The word palmetto derives from the Spanish word palmito, which means little palm. The most common palmetto species seen in South Carolina is the Sabal palmetto, which can grow as high as 65 feet. It is also known as a cabbage palmetto because when it is cooked, the heart of its trunk tastes like cabbage. However, we don’t suggest trying this since removing the heart of a palmetto tree will kill it!

Note: If you are really hankering for some palmetto, you can always shimmy up to very the top of a tree and slice off a piece of its stem. This is also said to taste like cabbage or artichoke.

Our famous trees’ spongy trunks were used to build the walls of Fort Moultrie on Sullivan’s Island, then called Fort Sullivan. The trunks successfully absorbed the brutal impact of British cannonballs during the Revolutionary War battle in 1776. Colonel William Moultrie led the soldiers to victory, and the fort was renamed in his honor.

Later, Moultrie designed a flag based on the blue uniforms and white crescent badges which decorated the caps of the fort’s guards. This flag eventually became recognized as South Carolina’s state flag. (Note: Though there are many theories, no one is 100% sure why the guards wore the crescent symbol on their caps.)

History makes this picture especially unique, since photographer Rikki Moye went out to Fort Moultrie to capture this perfect palmetto and crescent moon shot. If the sky were a dark indigo blue, it could practically be a photograph of our state flag!