This antebellum Greek Revival home in the Cherokee County region of Pacolet was built in 1834 for William Thompson Nuckolls, whose grandfather settled in the Thicketty Creek area in 1767. William Nuckolls eventually became a prominent South Carolinian, serving as a United States Congressman from 1827 through 1833. 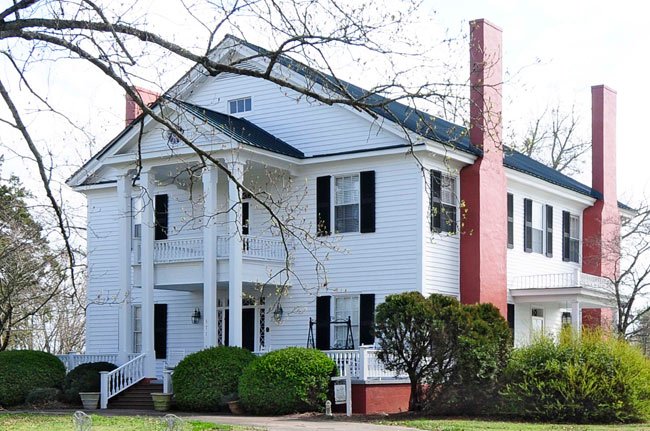 Earlier in his life, Nuckolls graduated from South Carolina College – now the University of South Carolina – and worked as a successful lawyer in Spartanburg. Yet he built his stately home in the country on land given to him and his wife, Susan Bulloch Dawkins, by his wife’s father upon their marriage. Construction on the house began in 1841 but was delayed when it partially burned that same year. The damage was repaired, and the home was completed in 1843. Notable features of the manse originally included double piazzas on both the facade and rear of the house, the double exterior chimneys on either side, and a circular interior staircase.

Nuckolls and his wife had no children, and the home left the family after their deaths in the mid 1850s. It changed hands a few times before John D. Jefferies acquired the property in 1875. He noted that the home was in a “pitiable state” when he bought it, leaving him to make serious repairs and alterations, including the removal of the double piazzas. Many of the Neoclassical details seen on the house today are a result of the late nineteenth century restoration. The home was restored again in 1996.

The Nuckolls-Jefferies House is listed in the National Register:

The Nuckolls-Jefferies House is significant as an intact example of a rural mid-nineteenth century Greek Revival plantation house with late-nineteenth century Neo-Classical alterations that are themselves significant. The Nuckolls-Jefferies House was built in 1843 by William Thompson Nuckolls and significantly altered in the 1870s or 1880s by John D. Jefferies. The house is a two-and-one-half story, pedimented gable-front residence clad in weatherboard with a stone foundation. It features a two-tiered central, pedimented portico supported by two sets of full-height, slender, chamfered wooden posts and towering exterior brick chimneys on both side elevations. The portico’s entablature features a frieze with arched cutouts and its tympanum boasts a circular window with floral tracery.

All of the chimneys were reconstructed in 1996, when the house underwent restoration. The rear of the house contains a two-story ell, built onto the house in the 1996 restoration. The symmetry of design, still present on the exterior and prominent in the interior of the house, speaks to its Greek Revival architectural style and distinctiveness. In addition, the Neo-Classical elements of the paired Doric portico piers remaining on the façade give the Nuckolls-Jefferies House a unique appearance and design seen nowhere else in the region. Surrounding the Nuckolls-Jefferies House are three contributing outbuildings: a small, one-story log gable-front building that dates from the mid-to-late nineteenth century that served as the farm’s smokehouse, a one-and-one-half-story gable-front frame barn, and another frame gable-front barn with side shed lean-to extensions, both barns clad in vertical board and batten frame sheathing and V-crimp metal panels [tin] roofing.