The Swamp Fox Murals Trail Society donates murals across Clarendon County. Most honor General Francis Marion, who fought valiantly in Revolutionary War battles throughout the area and across South Carolina. 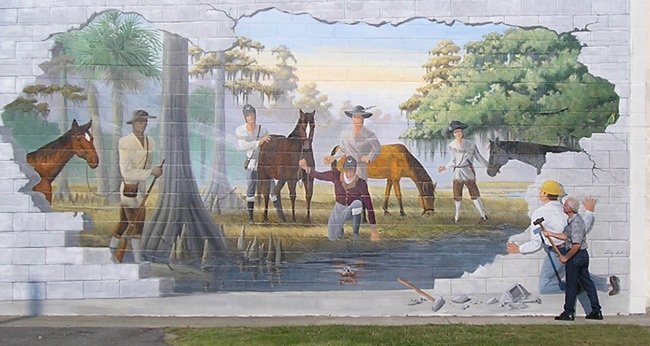 Carole Summers of Manning, 2011 © Do Not Use Without Written Consent

General Marion was known as the “Swamp Fox” for his brilliant guerrilla warfare and surprise attacks. The “Reflections” mural, shown above, features General Marion and the men of his brigade pushing back the British forces in the Black and Santee River basins. Located on North Mill Street, the mural is one of 17 – so far! – across Clarendon County, and it was painted by Terry Smith of Land O’ Lakes, Florida, in June, 2011.

Special thanks to Carole Summers of Manning for adding this photo to the SC Picture Project. Carole and her husband George founded the Swamp Fox Murals Trail Society. She says, “While it is unlikely that they thought of how they would be remembered by future generations, today we can appreciate the effort these brave Americans put forth to make this ‘the land of the free and the home of the brave.'”

Update: Along with the Santee Indian Mounds, the Clarendon Murals are now highlighted in a walking tour app you can download for free.