Wiggins, situated on the banks of the Chehaw River, is reached by way of Wiggins Road, a winding rural road that turns west off US 17 between Sheldon and Green Pond. Just southeast of Wiggins, the Chehaw joins the Combahee to form the St. Helena Sound.

Wiggins is home to the 12,500-acre Cheeha-Combahee Plantation, part of the ACE Basin, a vital network of conserved land between Beaufort and Charleston. ACE stands for the Ashepoo, Combahee, and Edisto rivers. Cheeha-Combahee is especially important within the basin as it features more waterfront acreage than any other preserved property. Today it is privately owned and used primarily for quail hunts.

In 1930, an attorney from New York, Richard S. Emmet, purchased Cheeha-Combahee. Like most Northern landowners who invested in historic rice plantations after the stock market crash of 1929, he used his forests and former fields for hunting. Emmet describes hunting the gray fox, which is native to South Carolina, as akin to traditional fox hunts in England.

As practiced at Cheeha-Combahee, the field, emitting various versions of the “rebel yell,” followed the hounds on horseback in the early dawn, through a wide variety of difficult terrain that made up for the lack of stone walls and fences to clear.

Sixty years later, in the early 1990s, a developer purchased Cheeha-Combahee Plantation, but his plans to build were stymied by financial burdens. Both Emmet and Ducks Unlimited had options to buy the property, but neither could raise roughly $10,000,000 necessary. Coy Johnston of Ducks Unlimited, one of the leaders of the ACE Basin Task Force, contacted banker Charles Lane and his brother-in-law, Weldon Schenck, to arrange a tour. Mr. Lane’s father, Hugh Lane, Sr., tagged along.

When the four arrived at the plantation house, Richard Emmet, a former owner who held one of the options on the property, was moving furniture out. Emmet told his visitors that he had only three months left on his option and was not able to find investors to allow him to exercise it. Schenck and the Lanes began contacting hunting friends and within a few weeks found six partners to purchase the property. Ducks Unlimited holds the easement, which allows no more than ten parcels to be subdivided, with no parcel smaller than six hundred acres.

Another important historic landmark in Wiggins is Field’s Point on the Combahee River, which features a boat landing owned by Colleton County. In describing Fields Point’s importance, the county says:

A small peninsula of land located on the first high ground upstream from the mouth of the Combahee River, Field’s Point has seen its share of history. One famous event occurred during the last year of the Revolutionary War. While the British were preparing to evacuate from Charleston and sent foraging parties into the lower counties to gather supplies, the American troops under General Mordecai Gist met and stopped the British at Combahee Ferry. Lieutenant Colonel John Laurens, former aid to General George Washington and whose father was Henry Laurens of the Continental Congress, rushed down from Charleston to join the battle. Gist ordered Laurens to stop the British going downstream at Tar Bluff, just upstream of today’s Field’s Point. But in the early morning hours of the next day, Laurens and his men ran into a British ambush where Laurens was mortally wounded. He was taken back to Stock’s Plantation a few miles from the Point and buried in the Stock’s family cemetery.

Another important event happened during the Civil War. Field’s Point was the location of a “blockhouse” and some minor earthen fortifications, used to prevent access to the Combahee River by the Federal forces stationed at Hilton Head and Beaufort. On June 3, 1863, a crucial raid took place on the Combahee. Federal forces led by Col. James Montgomery and accompanied by Harriet Tubman raided up the river; the Federals disembarked some troops at Field’s Point to drive off the few Confederate defenders and pickets. Montgomery and Tubman continued up river to Combahee Ferry while Union troops occupied Field’s Point. After a day-long occupation the Confederates countered, riding in from Green Pond. The Union troops re-embarked on their gunboat and went back to Beaufort. The area of Field’s Point and Tar Bluff was guarded for the duration of the war by the Confederates. Today the Confederate earthworks have essentially eroded into the Combahee River. Colleton County owns the boat landing at Field’s Point but the surrounding land is part of Cheeha-Combahee Plantation (1).

The history of Wiggins is also tied to a lumber mill established in 1900 by Robert Wiggins. The mill had a succession of owners over the next quarter-century, and although it closed in 1925, some buildings from the old mill village remain.

The photo at the top of this article shows one of the sawmill’s buildings, a small storage shed that housed a four-wheeled cart that carried track workers to and from work sites (). The platform (seen in the photo’s foreground) allowed the cart to be rolled to the tracks and set it in place (). 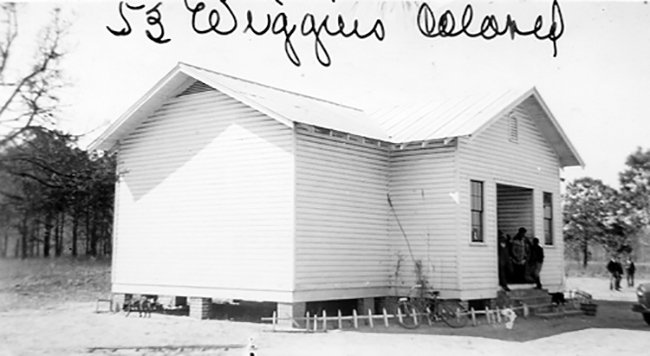 These two photos, taken between 1935 and 1950, show the Wiggins Colored School (above) and a school in Wiggins for white children (below). Wiggins was in School District 53. They were taken as part of an effort to document South Carolina’s schools for insurance. 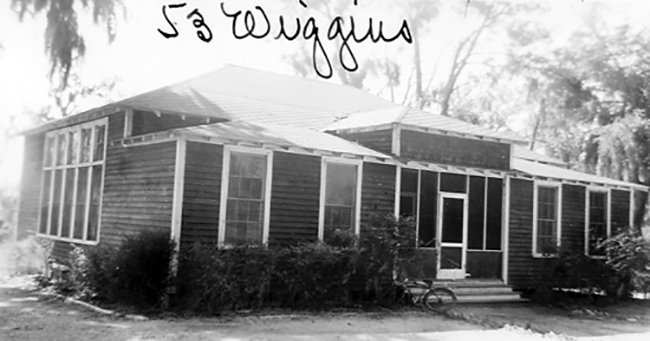 Photographer Steven Taylor of Walterboro, who contributed the image above, says this about Wiggins: “I love to drive down the country roads and explore, finding that special place. Wiggins was something of a mystery to me.

“I remember when I was 18 driving down the road to Wiggins and never making it to the end as I turned around and headed back to SC Highway 26. Now I am 32 and felt it was time to conquer this feat. I went to the end to see what was there and this old building stood. Not sure the story behind it but I thought it had some special southern charm you can’t find any where else!”

Contributor Edward H. Phillips responded to our request for further information and shares the following: “My family lived in Wiggins back in the days of the Sawmill Village. My dad, J.B. Hickman, was the foreman there in its heyday. My grandfather, W.C. Ritter, worked there also. The building in the picture was moved to the present location from the Seaboard Airline Railroad about one mile back. There was a depot and several other buildings there.

“A Mr. Lyons and his family lived in one of the houses. He worked for the railroad. Behind the plantation house to the left is a road that goes to the Cheehaw River. Beside this road are the concrete foundations of the sawmill. The plantation has a large two-story building that was the comissary for the town. The upstairs was later used for parties, meetings, and social events. The Hickman Family Reunion was held at the boat landing on the Combahee River at Wiggins for a number of years. I lived at Green Pond until 1956, so I went to Wiggins many times to visit my grandparents.”