Wesley Chapel United Methodist Church in Lydia is not only the oldest Methodist church in Darlington County, but one of the oldest in South Carolina. The church began in 1789 about a mile-and-a-half north of the present location as a camp meeting site. Methodism in rural parts of the United States spread through outdoor meeting sites known a “camps” where preachers would travel in circuits to conduct worship. Baptists had established this part of the Pee Dee region 50 years earlier, and when Methodists arrived seeking converts, they were the first non-Baptists to settle here. 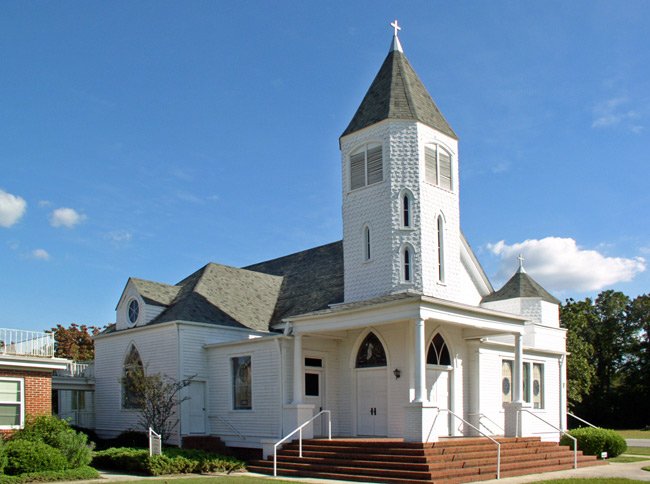 The church was originally called Gully Church, and its members built their first meeting house in 1802. In 1832 the church acquired land at the present site and rebuilt, changing its name to Wesley Chapel in 1834. The current building was constructed in 1908 and remains a significant piece of religious history in the Pee Dee. 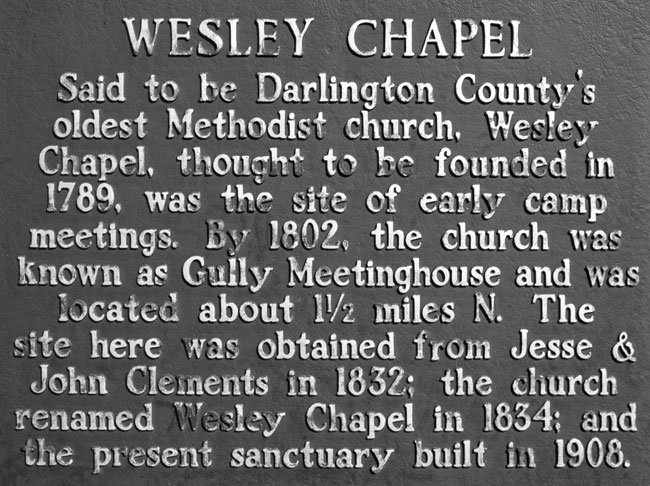 In last week’s “Church of the Week” we learned about the community of Lydia on the western border of Darlington County and how the economic times helped to shape the history of Mt. Elon Baptist Church. In this week’s church, Wesley Chapel United Methodist, we’ll see that the church was impacted by the same economic events with a very important additional influence. The growth and evolution of Methodism in South Carolina played a vital part in not only the beliefs of the Methodist Church, but also how members worshiped and the facilities they used.

Wesley Chapel’s history began in 1789, shortly after Methodism was brought to the Pee Dee by Francis Asbury in 1785. As a result of that visit, the Pee Dee Circuit was established in 1786. The Gully Meeting House, forerunner of Wesley Chapel, was established in 1789. Be mindful of these dates, 1785 through 1789. This was right after the American Revolution. To start an entirely new religion at this time was a big challenge and was not supported by the masses. However, there were enough people in this area to embrace this new religion, and the Gully Meeting House was established under a bushy arbor.

Unlike other religions which had a preacher for each church, Methodist churches started out with circuit riding preachers, or ministers who would ride the countryside on horseback, stopping, staying, and preaching where ever they could find willing souls to help them and listen. Aris Woodham and Spencer Harrell were two people in the area who opened their homes to the circuit riders and encouraged neighbors to attend services held at camp meetings. Remember the term camp meetings; there’s an entire article that I can write on camp meetings and their facilities – some are still active in South Carolina today.

A small building was erected facing the dirt road from McCullom’s Ferry to the Darlington Court House. This is basically where United States Highway 15 is now, at the Boggy Gully. In 1832 the group moved to higher ground, about one-and-a-half miles south, on a six-acre tract of property purchased from Jesse Clements and John Clements Jr. for ten dollars. By 1834 the group had completed a basic, but comfortable meeting house-style building to serve its needs and changed its name to Wesley Chapel Methodist Episcopal Church, South.

In 1857, under the leadership of the Reverend J.F.A. Elliott, a new, larger building was built to meet the demands of the growing congregation. The size of this building afforded the church the opportunity to move from the camp meeting-style of worshiping into the newly-formed class meeting-style. More importance was being placed on teaching as an educational tool to enhance the members spiritual welfare than the day-long camp meeting sessions. This is what we know of today as Sunday School.

Remember last week’s article stating the Lydia Post office opened on January 31, 1856? Lydia’s growth that followed paralleled the growth of Wesley Chapel. Even though Wesley Chapel was about one-and-a-half miles outside of “downtown” Lydia, the strong farming based community enabled the membership of Wesley Chapel to increase and prosper. The Women’s Missionary Society, the forerunner of United Methodist Women, was started, and camp meetings were held as an annual event at this location for about a decade.

With positive economic times abounding, a movement began in 1907 to build a new building. This was spearheaded by the Reverend J.R.T. Major and a goodly number of members, including James Register. The membership felt like it had outgrown the 1857 40′ x 66′ building. Very quickly, a building committee was formed by members Register, Lee, Reynolds, Best, Harrell, Clements and Lawson; many descendents of these members continue to be pillars of the church today. In a very short time, $5,000 was raised to begin construction.

By early 1908, the 1857 building had been demolished, which sadden some members. But when they realized that the new building would be built in the exact location as the old building, this gave those members a sense of continuity between the past, the present, and the future. Times were prospering and the new church was certainly a visual sign that Wesley Chapel was moving forward with the Lord’s work.

Mr. J.E. Moon, a native of Greer who was living in Hartsville at the time, was chosen to be the builder of the new edifice. With the help of local members, work moved very quickly on their wood frame building. As was the typical practice, timber was cut locally and the lumber sawn locally for the building materials. The Modified Gothic building’s interior contained an auditorium, a choir loft, Sunday School class rooms, a pastor’s study, and a ladies’ parlor. The interior walls are covered with horse hair lime-based plaster applied to sawn wood lath. The ceiling has directional tongue and groove, v-grooved wood ceiling boards.

The exterior elevations exhibit several Gothic architectural elements, for instance, the pointed windows under steeply pitched roofing. The present stained glass windows are memorial windows, which replaced the original red colored glass. Horizontal 1×6 lap siding covers the exterior walls. The bell tower and gables are covered with hand-drawn cypress wood shingles installed in a staggered edge pattern. The bell tower houses a bell which is rung by pulling a rope just inside the front doors.

The first service was held in the new church on December 20, 1908 with a full dedication service held on January 10, 1909. Allow me to point out a technicality about a dedication service or a consecration service, depending on the religion. Either service is held only when the building is debt free. Otherwise, the building is simply blessed upon moving in. This fact tells us that when the congregation moved into the new building at Wesley Chapel, it was completely paid for, which was quite an accomplishment for these times.

The present congregation of Wesley Chapel continues to do an admirable job of maintaining the building in its original state. Additions or repairs that have been made to the building are in the same or similar character as the original 1908 construction. I’m sure that this would make Mr. Moon and the original building committee proud of the building that you see today at 3061 Wesley Chapel Road in Lydia.