This Greek Revival church in the rural community of Brittons Neck in Marion County holds the distinction of being the oldest church in the county and the seventh oldest church building in South Carolina. The church was both established and built in 1735 as All Saints Anglican Church in a nearby rural area called Tan Yard. However, after the Revolutionary War, the church was abandoned, as many members were lost to the war. The building was then adopted by Methodists following visits to the area from itinerant Methodist preacher Francis Asbury. 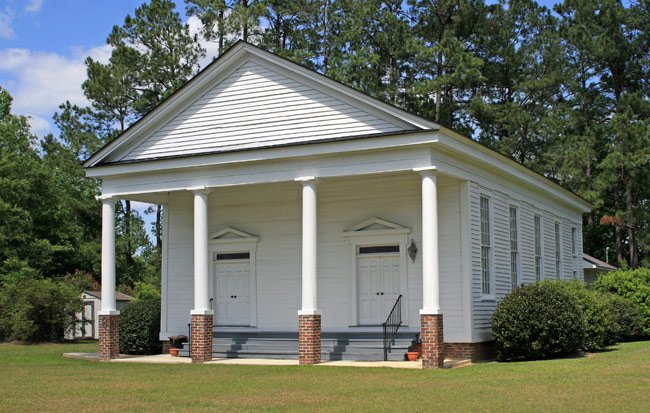 As the area a few miles away called Old Neck Cemetery grew and the population in Tan Yard declined, it was decided that the people of Old Neck Cemetery needed a new church. Rather than build a new one, residents of both areas agreed that this one would be dismantled and relocated fourteen miles away in Old Neck Cemetery. The relocated church was called Old Neck Methodist. In the early twentieth century Old Neck Methodist and another nearby small church, Nebo Methodist, decided to merge in light of dropping membership in both churches. Rather than build a new church to accommodate the combined congregations, the two churches decided that the building would once again be moved. The church was dismantled and rebuilt in its current location central to both churches in 1917, which is likely how the church received its present name. The congregation remains active.

Of all of the worship centers that I’ve visited in South Carolina, none surprised me more than this building, a real “sleeper.” After reading, researching, and visiting churches, I thought that I knew where all of the old ones were. A friend mentioned to me in 2007 that her home church was old, dating back to the 1700s. My response was cordial but skeptical. A Methodist church in the 1700s, not hardly. But I wrote the name down, “Central United Methodist Church,” somewhere in the Brittons Neck area.

Prior to my next trip to that area I began researching Central United Methodist Church. My first attempt was dependable Google – nothing. Then the South Carolina Department of Archives and History, The National Register – nothing. South Carolina Historic Roadside Marker Project, Marion County – nothing. It’s almost like it didn’t exist, or at least historically speaking. She told me it was there, and I believed her, but maybe the congregation was old and the building was new. Off I went one beautiful Saturday in search of a ghost building on South Carolina Highway 908 in Marion County.

When I saw a building that may be what I was looking for, it was one of those slam-on-the-breaks, almost three-car-pileup moments. I couldn’t believe what my eyes were seeing. Sitting there beside the road all by itself was one of the neatest, well-kept examples of the Southern Meeting House, wood lap siding churches that I had seen in a long time. What did the sign in front of the build say? “Central United Methodist Church, Established 1735.” I knew that I was at the right place.

I went through my normal routine of measuring the building, examining the nail heads, looking under the building for saw marks, checking out the glass for bubbles, all of the tests I typically run in order to assign a quick date to the building. It was passing all of the early construction tests; this building may, in fact, be the real deal. Little did I know just how true that assessment was until I got home and did further, deeper research. Based on my findings, this unknown building is the seventh oldest standing church building in South Carolina.

Before I go any further, I would like to acknowledge the Reverend F. Carlisle Smith, whom I’ve never met, for a paper that he wrote in 1986 about the history of Central Methodist. If it were not for his paper, I would know absolutely nothing about this wonderful gem and its life. Even after further research, I’ve yet to find much more written about this congregation. With very little corroborating documentation, I wonder from time to time if I have accurate information. I have read enough to believe again that this building is, in fact, real. Now let me tell you what I’ve found.

This area of the Pee Dee was settled in 1735 by a group of Anglicans from England, many having the last name of Britton. They realized that they would be settling in a remote corner of the Prince George and Prince Fredrick Parishes. They had an idea that they may not get much assistance from the Parish Church with their spiritual needs. So along with their worldly possessions, they also brought brick for a church building and their own preacher. Upon arrival they cut long leaf pine trees for framing timbers and flooring as well as black cypress trees for siding. This 38′ x 66′ church building was built on the road to the Tan Yard area. The four 12-inch round columns across the front, supporting the roof, are each, in fact, a solid tree. The column-making process was very simple: cut a tree down, remove the limbs and bark, then stand it up – instant round tapered column. This process really makes more sense than the effort we go through today to glue little pieces of wood together and turn them around on a large lath. The settlers named their church All Saints Anglican Church. There is very little written about their first preacher, the Reverend Dr. Robert Hunter, or his successor, the Reverend Robert Allison.

The church and the area flourished until the Revolutionary War, which took a great toll on the men in the area. On January 4, 1786, when circuit riding preacher Francis Asbury stopped by, he found a lovely, well-maintained church building without a congregation. Due to his leadership and the recently formed Methodist denomination in 1771, All Saints Anglican switched to the Methodist faith. Again, the church began to grow with great interest. In the early 1850s a population shift began to occur, and by 1858 there was a larger need for a church building in the Old Neck Cemetery area than in the Tan Yard area.

Instead of building another church building, the two groups decided to move the All Saint’s building. This was not your typical “call a house moving company to move the building fourteen miles in 1858.” The members dismantled the building and reassembled it at the Old Neck location. This was really not as hard as you may think. In 1735, and even into the late 1800s, buildings were built with Roman numerals stamped on the framing timbers and pegged together. So disassembling a building was a simple task of removing the siding, driving the wooden pegs back out, moving it piece by piece, and reassembling it by the numbers. Ingenious, isn’t it? They were no dummies.

The “move” went so well, that in 1917 when another change seemed to be inevitable, the church was moved again. The membership of Old Neck and Nebo Methodist was low, so a merger was suggested. The two groups were having a problem deciding whose building to use and where the new church would be located. The decision to move the Old Neck church building to a central location and form a new church was made. It had already been proven that the building could be moved, so it was dismantled and reassembled again. Don’t you love it when people appear to be practical and get along so well? Example: reuse an existing building, move it to a central location and name it Central Methodist Church.