This trestle in Newberry runs parallel to Harris Street and once formed a portion of the Columbia, Newberry, and Laurens Railroad, also known as CN&L. Nicknamed the Dutch Fork Line, the rail company was chartered in 1885 after the merging of two pre-Civil War lines, the Laurens Railroad and the Greenville and Columbia Railroad. The 75-mile-long track connected the Upstate with the Midlands. 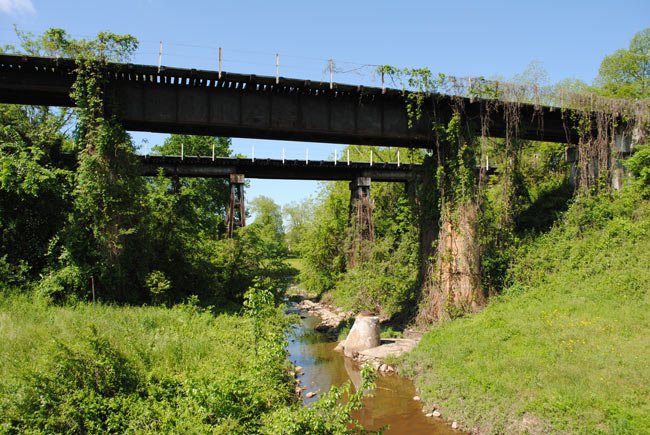 The track was bought by the Atlantic Coast Rail Line in 1924 and CSX in 1984. Though the historic line – pictured in the foreground of the above photo – is no longer in use, the current CSX line now runs parallel to that line, as seen in the background.

Ann Helms, who contributed the above photo and information, also shares this interesting tidbit: “The bridge crosses a creek along Harris Street and is near another street called Cline. I would bet that it was originally called C-Line Street. In my search for stations I have learned a lot about how streets are named around a railroad area. In Kingstree the depot is near Acline Street, which used to be called A.C. Line Street for the Atlantic Coast Line, which built the depot.”