The Orangeburg County community of Norway is home to this rotunda-style structure that houses Willow Swamp Baptist Church. While the architecture of Willow Swamp Baptist is unusual for a South Carolina church, it took more than two centuries and five buildings before this brick edifice became the current home of its congregation. 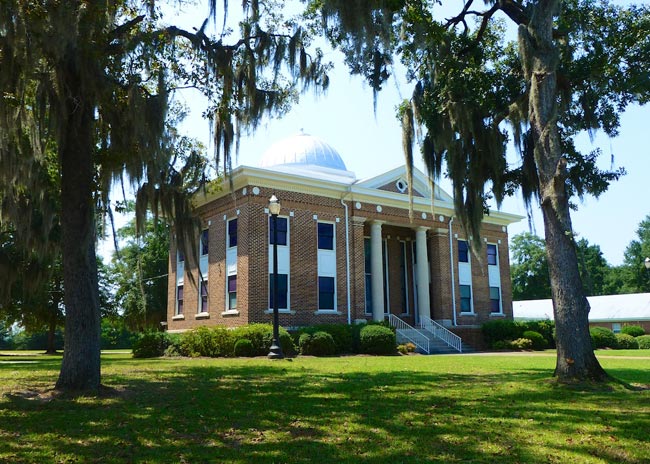 The church was formed in 1805 when 36 members of Dean Swamp Baptist Church in nearby Springfield left to form their own church. The original members of Willow Swamp Baptist met in a private home along the church’s namesake Willow Creek until they built their first church, a simple one-room wooden building, about a mile and a half from the current church. White members and their slaves, who were also listed as members, worshiped here in separate sections.

A second church was built across the street from the present church and was utilized until Union troops burned it in 1865 during the Civil War. Financial devastation during Reconstruction prevented the congregation from rebuilding a sturdy church, but they were able to create something they called a “shelter” where the current church sits. This shelter was used as both a church and a school during these dismal days.

Members, including the former slaves, saved money over the following years for a new building. In 1869 the black members were given permission to leave and form their own church, which they did. The remaining white members were eventually able to build another wood-frame church – this one including stately columns – and worshiped there until 1920. This building was located where the cemetery now rests. In 1919 the congregation drew plans for the present church, which was completed the following year and is comprised of donated bricks. Willow Swamp Baptist Church continues to thrive.