Columbia is located in the center of South Carolina at the junctions of Interstates 20, 26 and 77. It is our state capital and most populous city. Columbia is the county seat of Richland County, the home of the University of South Carolina‘s main campus, and the site of the South Carolina State Fair each October. A small part of Columbia also extends into Lexington County.

Columbia was settled by Europeans in the early 1700s and chosen to be the site of South Carolina’s new state capital in 1786. It was chartered as a town in 1805 and as a city in 1854. Columbia was named for Christopher Columbus, and it was South Carolina’s first planned city (wide streets arranged in a grid pattern) and the second planned city in the United States (Savannah was the first.) Despite this, Columbia did not have a single paved street until Main Street was surfaced in 1908. 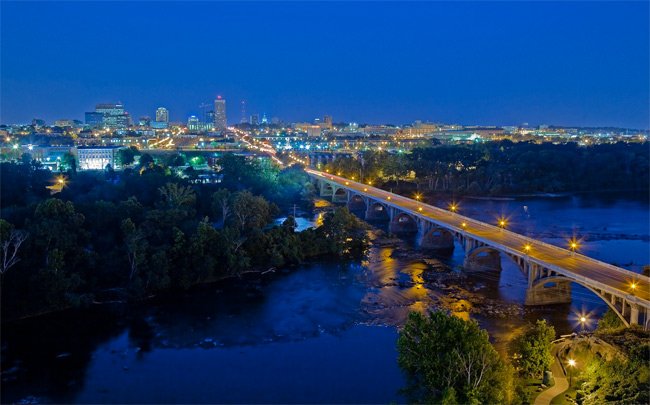 Benton Henry of Latta, 2008 © Do Not Use Without Written Consent

Photographer Benton Henry was able to capture the spirit of the capital city in his above image: “The photograph was made for an article celebrating the 25th anniversary of the Columbia Business Monthly magazine. They asked me to get them a shot that would say “Columbia”. I thought this did it, and so did they. It has since been used for a phone book cover, websites and sold as a fine print throughout the area.”

Chris Varnadoe of Columbia, 2007 © Do Not Use Without Written Consent

Photographer Chris Varnadoe, who contributed the photo above, describes the scene: “St. Peter’s Catholic Church is visible in the foreground. St. Peter’s has served Catholics in the Midlands for over 175 years and is South Carolina’s oldest parish outside of Charleston.”