Although no battles were fought here, Abbeville has a rich Civil War history. During the Civil War, Abbeville attorney and Mexican-American War veteran Brigadier General Samuel McGowan commanded a Confederate Army brigade from the Battle of Fredericksburg to the surrender at Appomattox Courthouse at the war’s end. 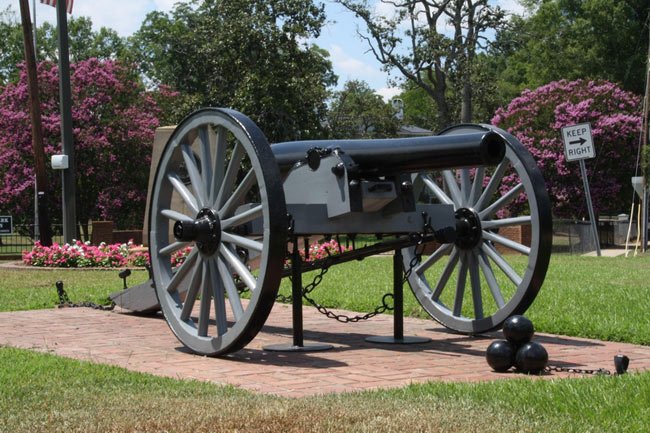 McGowan’s brigade of South Carolinians participated in the costly Battle of Spotsylvania Court House in May of 1864. The brigade, along with another one from Mississippi, was charged with defending a bulge in the Confederate battle line. The bulge was known as the Muleshoe Salient for its distinctive shape.

McGowan’s Brigade was charged with defending the angle facing westward. Fierce hand-to-hand combat with Union Army Major General Winfield Scott Hancock’s II Corps raged for over twenty hours through darkness and drenching rain. It was during this battle that wounded men would fall down, be pushed into the mud, and drowned.

Over 10,000 men from both sides would die in this battle, giving it the name the “Bloody Angle.” The S.C. State Senate passed a Concurrent Resolution on April 11, 2007, urging the federal government to authorize a monument memorializing McGowan’s Brigade. The monument was dedicated at the Virginia battle site in spring of 2009 and today can be found in Abbeville Court Square near the Abbeville Confederate Monument.

Many thanks to frequent contributor Mark Clark, an Abbeville native currently residing in Winnsboro, who submitted this picture and great description. Mark says that he “remembers an errant motorist crashing into and destroying this cannon’s predecessor when I was a young boy many years ago. The town’s unique military history and sense of community allowed me to enjoy my brief military service in the U.S. Navy as a young man. To me this picture sums up the bucolic beauty returning soldiers came home to following the horrors of war.”