Abbeville’s Court Square forms the heart of historic downtown Abbeville and offers a unique selection of shops and restaurants. The square and the one-way street that runs around it get their names from the historic Abbeville Courthouse, which stands proudly beside the Abbeville Opera House. At one end of the square – which is actually more of a rectangle – you will find a replica of Big Ben’s iron bell. On the other end, you will find the Abbeville fountain, which offers respite for dogs and horses.

In the middle of the square rises the Abbeville Confederate Monument – seen above – with the Abbeville Civil War Cannon located nearby. The Abbeville Livery Stable and the historic Abbeville Trinity Church are both within easy walking distance.

The square is home to many festivals and events, such as “Flicks on the Bricks,” an outdoor movie series hosted by the City of Abbeville during the summer. Speaking of movies, one interesting thing to note is that Abbeville’s square was featured in Sleeping with the Enemy, starring Julia Roberts. You can see it when Robert’s character, Laura, is traveling on the bus.

The Abbeville Humane Society Alliance Fountain (shown below) is one of 125 fountains given to communities in our country during the early 1900s by the National Humane Alliance. This five-ton granite and bronze fountain was installed in 1912, and its beautiful design of water flowing from the mouths of lions makes it a popular Abbeville attraction. Its upper basin is meant to be a water bowl for horses, and the small cups at the bottom are for cats and dogs. 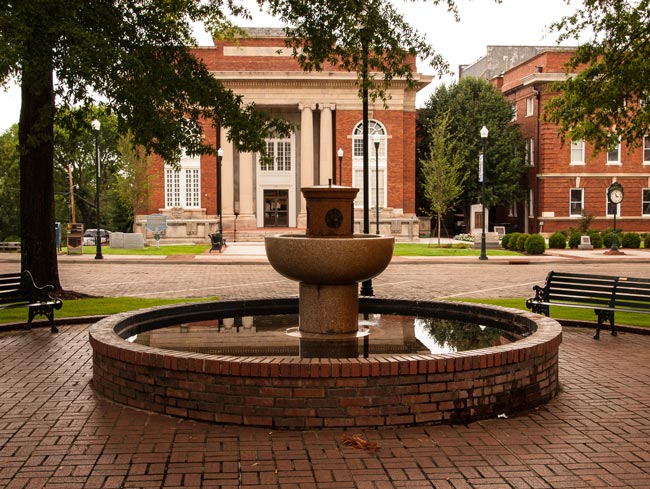 William L. Nickles of Anderson, 2011 © Do Not Use Without Written Consent

Abbeville Court Square is listed in the National Register as part of the Abbeville Historic Distric:

The Abbeville Historic District is comprised of a large portion of the city of Abbeville, the county seat of Abbeville County, South Carolina. Of the 528 properties in the district, 319 contribute to its historical character. The focal point of the district is the Court Square, on which are located the County Courthouse, Municipal Building, and a well-preserved collection of late nineteenth century brick commercial buildings. The district also includes the older residential section sections of the city, several churches, two school buildings, and three buildings associated with the city’s railroad history.

The city of Abbeville was formed in the late eighteenth century; however, most of the properties included in the district reflect the city’s history throughout the nineteenth and early twentieth centuries. As a result, the buildings display a wide variety of architectural styles including Second Empire, Gothic Revival, Beaux-Arts, Queen Anne and Bungalow. In addition, the district reflects the city’s role as a commercial center for the surrounding county. The city is also noted for its role in the political and governmental development of the area. Several residences are important for their association with persons or events of historical significance are located within the boundaries of the district.

Thanks to contributor Mark Clark, an Abbeville native who currently resides in Winnsboro, for submitting the photo below. Mark writes, “The first job I ever had was working for the Abbeville Drug Company, which used to be located in the building at the far end of this picture. I stocked the shelves and delivered prescriptions to customers in town. Although Abbeville is a very small town, I quickly found that I knew very little about where the streets were without the help of a city map. Of course, since everyone in Abbeville knows everyone else, I quickly got to know most of my customers and learned a little about myself as well.” 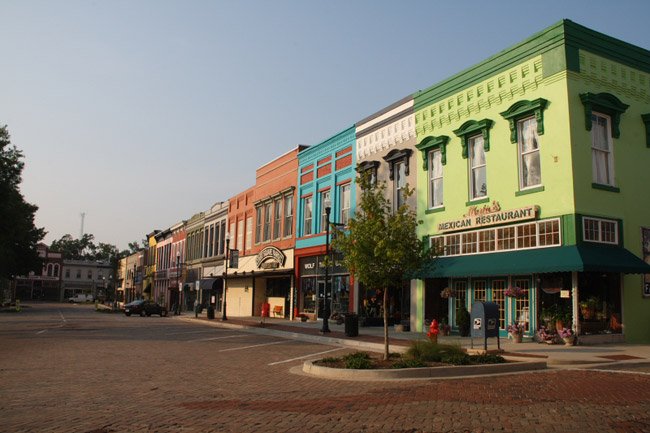 Mark Clark of Winnsboro, 2011 © Do Not Use Without Written Consent